'I am 52 years old and I'm still broken inside,' says one of 18 victims of Gordon Stuckless, a former usher at Toronto's Maple Leaf Gardens 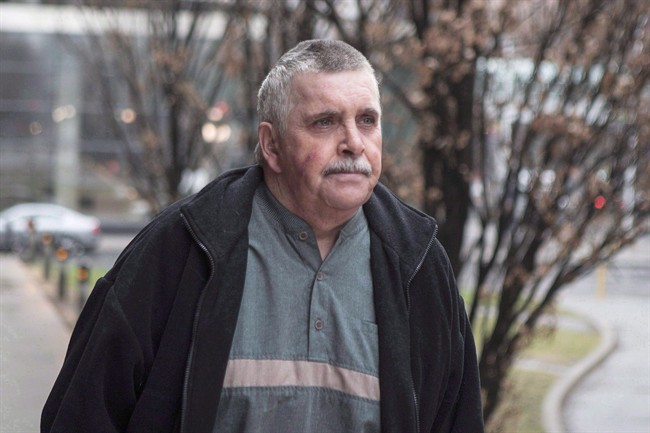 Gordon Stuckless arrives at court in Toronto on April 22 , 2014. Victims of the man at the heart of the Maple Leaf Gardens sex abuse scandal say they’ve been permanently scarred by his actions. A Toronto court is hearing victim impact statements as part of a sentencing hearing for Stuckless, who pleaded guilty in 2014 to 100 charges related to the sexual abuse of 18 boys decades ago. (Chris Young/CP)

TORONTO – Victims of the man at the heart of the Maple Leaf Gardens sex abuse scandal say they have been permanently scarred by his actions, their lives derailed by the shame and trauma of what they endured decades ago.

Several of Gordon Stuckless’s victims told a Toronto court Wednesday that they dropped out of school and sought relief in drugs and alcohol after the former usher, teacher and coach befriended and then abused them.

Unable to trust others, many rebelled against authority and struggled to form meaningful relationships, they said in emotional statements delivered as part of a sentencing hearing.

Even now, many of the men — most in their 40s and 50s — said they are tormented by memories that intrude on their thoughts and disturb their sleep.

“You are the bogeyman in my dreams,” said one man, who cannot be named under a publication ban. “I struggle every day to get up in the morning.”

Another man, who can only be identified as J.D., said the abuse he suffered at 11 while at Maple Leaf Gardens filled him with self-loathing and hopelessness.

“I am 52 years old and I’m still broken inside,” he said, adding he kept his “dark secret” under wraps for close to 40 years.

Another man identified only as M. said he suffers from “constant flashbacks” and is always “on high alert.”

Stuckless, now in his late 60s, watched silently from a table at the front of the courtroom.

Stuckless pleaded guilty in 2014 to 100 charges related to the sexual abuse of 18 boys between 1965 and 1985. He was later found guilty of two additional charges of gross indecency linked to two of the victims.

The Crown is expected to seek a sentence of 10 to 12 years but prosecutor Kelly Beale suggested she might ask for more.

Prosecutors decided last year not to seek to have him designated a dangerous or long-term offender after what the Ministry of the Attorney General called “careful consideration” of the case, including a psychiatric assessment conducted on Stuckless.

The court-ordered psychiatric assessment found Stuckless did not meet the criteria for dangerous offender status, while recognizing that the court could reach a different conclusion.

Relatives of some victims said Stuckless should face a sentence as long as the one he inflicted on their loved ones.

“Gordon Stuckless has proven time and time again that he is not only one of the most prolific sexual offenders in this country but that he is not going to be cured, fixed or in any way be able to redeem himself,” she said.

D.P., whose late son was also abused by Stuckless, said she hopes he will be monitored even after his sentence is up.

“I don’t ever want to hear that he’s molested another child,” she said outside court.

She blames Stuckless for her son’s drug use, which led to his death from an overdose in 2013.

Stuckless remains under house arrest while on bail and must be accompanied by his brother when he leaves the home.

An agreed statement of facts said he “positioned himself to have constant access to children,” particularly those without a father figure.

“He would groom and coerce the children. They became eager to please him. (…) He would tell them that what they were doing was ‘normal’ and ‘fine,'” the statement said.

Most of his victims were around 11 or 12 years old, though some were as young as six, it said.

He previously pleaded guilty in 1997 for sex assaults on 24 boys while he was an usher at Toronto’s Maple Leaf Gardens between 1969 and 1988.

He was sentenced to two years less a day in that case, but that was later increased to five years. He was paroled in 2001 after serving two-thirds of his sentence.