In newly filed documents at Ontario's Court of Appeal, prosecutors reject claim that the convicted murderers were victims of 'cultural stereotyping' 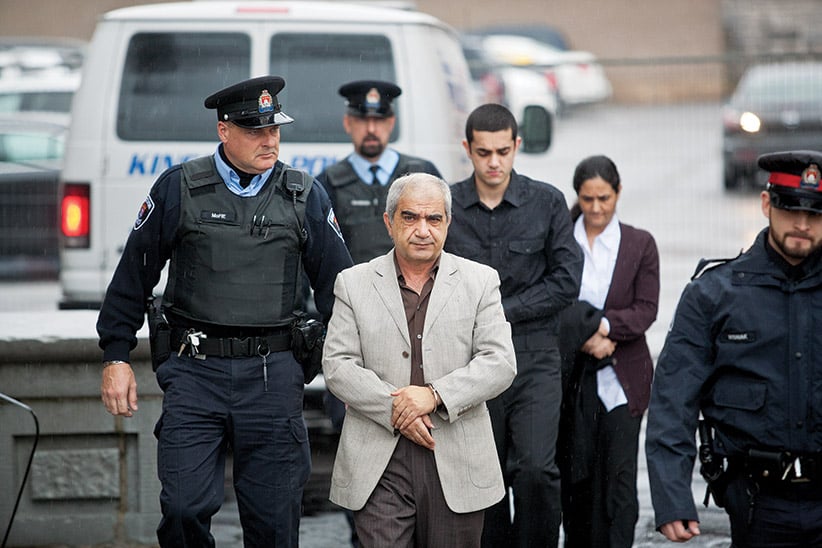 The Shafia family “honour killers”—convicted nearly four years ago after a sensational trial that shocked Canadians—were found guilty because of the “overwhelming evidence” against them, not because the jury engaged in cultural stereotyping, prosecutors argue in new documents filed with Ontario’s highest court.

As reported last week, the convicted trio—father Mohammad Shafia, wife Tooba Yahya, and eldest son Hamed, all members of a wealthy Afghan clan that immigrated to Montreal in 2007—are asking the province’s Court of Appeal to quash their quadruple first-degree murder convictions and order a new trial. Their key argument is that the original judge should not have allowed the testimony of Shahrzad Mojab, a University of Toronto professor who specializes in honour-based violence, because her evidence reinforced “pre-existing stereotypes of violent and primitive Muslims” and invited jurors to convict based on “cultural prejudice.”

Her testimony “did no such thing,” the Crown contends in its own lengthy factum, filed this week in advance of a Dec. 14 court hearing. “The expert evidence was balanced and respectful, and in no way invited the jury to reason that the appellants were disposed to kill members of their family.”

Obtained by Maclean‘s, the government’s 87-page factum notes that Mojab was never specifically asked about the Shafia case; instead, she was called to the witness stand to provide “context” about the concept of family honour in certain Middle East cultures. “As the trial judge observed,” the factum continues, “knowledge of this cultural phenomenon and of its implications are not within the everyday experience of the average juror in Kingston, Ont.”

The appeal should be dismissed, the Crown says. “Despite the intense public interest, and the scale and particular horror of the tragedy, this case was relatively simple and boiled down to a single issue: was this an accident or a planned and deliberate murder?” the factum reads. “When the various pieces of this case are considered in their entirety, as they must be, there is overwhelming evidence that this was a planned and deliberate murder.”

On the morning of June 30, 2009 (the day before Canada Day), a black Nissan Sentra was discovered at the bottom of Kingston Mills, a lock station on the Rideau Canal. Floating inside the submerged car were three sisters—Zainab, 19; Sahar, 17; and Geeti, 13—and 52-year-old Rona Amir Mohammad, the girls’ supposed “auntie” who was actually their father’s infertile first wife in their secretly polygamous clan.

Police initially assumed they were dealing with a grisly traffic accident. Within hours, suspicion had settled in.

Questioned by a detective, the father, second wife and eldest son told essentially the same story: that the family of 10 was driving home to Montreal after a Niagara Falls vacation (split between two cars, the Sentra and a Lexus SUV) when they stopped at a Kingston motel for the night. Zainab grabbed the keys to the Nissan, they insisted—and the next morning, she and the other three were nowhere to be found.

Near the lip of the canal, however, an alert officer found tiny shards of plastic—fragments that were later matched to the Lexus headlight, placing both family cars at the locks that dark night. Even more damning, dents and scratches on the front left side of the Lexus were consistent with damage on the Nissan’s back bumper, proving that one car rammed the other over the concrete edge and into the water.

Over the next two weeks, detectives also discovered much more about Mohammad Shafia, a tyrannical father who moved his children to the freest of countries but insisted they adhere to his oppressive, old-world honour code. The girls rebelled instead. Zainab ran away to a women’s shelter. Sahar had a secret boyfriend. Geeti, despite her young age, was perhaps the boldest of all, telling school officials she wanted to be placed in foster care. Desperate for a divorce, Rona cried to relatives that she had endured years of physical and emotional abuse.

Closing in on their suspects, investigators planted hidden wiretaps—then listened as Shafia railed against his dead daughters: “Whores.” “Filthy.” “Treacherous.” “May the devil s–t on their graves!”

“Nothing is more dear to me than my honour.”

It took the jury just 15 hours of deliberations to endorse the prosecution’s theory: that the Shafia girls’ Westernized, disobedient behaviour had so shamed the family that mass murder—disguised to look like a foolish wrong turn—was the only way to erase the stain. Rona was a convenient throw-in, killed because she, too, wanted to escape the family home. “It is difficult to conceive of a more heinous, more despicable, more honourless crime,” Justice Robert Maranger said on Jan. 29, 2012, after the guilty verdicts were announced.

In their factum, the killers’ new lawyers (Michael Dineen, Frank Addario and Scott Hutchison) say Maranger made numerous errors of “misdirection and non-direction” in his pre-deliberation charge to jurors. But at the heart of their fight for a new trial is Mojab’s expert testimony, which they claim was “overwhelmingly prejudicial” and never should have been permitted.

During her one day on the witness stand in December 2011, Mojab testified that a family’s reputation in some Middle Eastern cultures is measured by the chastity of its women—and that even the perception of inappropriate conduct, such as pre-marital sex, can be a death sentence. “The shedding of blood is the way of purifying the name of the family in the community,” she told the packed courtroom. “It is an expected act. It is expected that the honour of the family be restored and controlled.”

Her testimony invited the jury to engage in “cultural stereotyping,” the Shafias argue. “Allowing cultural disposition evidence tempts jurors to follow their worst impulses and creates the risk that defendants will be judged by their background rather than their proven actions,” their factum reads. “By placing the deaths of the deceased in a context of culturally inspired violence against women, Dr. Mojab’s evidence risked engaging racial and cultural animus.”

The Attorney-General’s office disputes that accusation, saying the appellants “have mischaracterized” the professor’s testimony. “The evidence that ‘honour’ provided the motive for killing the deceased came not from Dr. Mojab, but rather from Shafia himself,” their factum says. “Following the deaths of his wife and daughters, Shafia repeatedly spoke about honour, and its relationship to their deaths, with Tooba and Hamed. His words, properly understood, explained that the deceased were killed because they had offended the Shafia family’s honour.”

Mojab also made it clear that honour killing is a cultural phenomenon that predates organized religion—and is not sanctioned by Islam. And while some in Afghanistan do condone such brutal violence, she said, many others believe in gender equality. “Dr. Mojab specifically stated that it was important not to generalize from her evidence, so as not to stigmatize the Afghan community,” the Crown factum continues. “She was clear that Afghan communities are as diverse as any other. Far from creating a risk that the jury’s verdict would be tainted by cultural prejudice, her evidence served to dispel cultural prejudice.”

The factum further argues that expert cultural evidence “has been frequently admitted in Canadian courts”—everything from the cultural characteristics of outlaw motorcycle gangs to the “code of silence” that exists in some urban communities” to the “meaning of particular Chinese characters written in blood.” In fact, during cross-examination, Mojab provided answers that appeared to bolster the defence: that honour killings in Canada are rare, that she’d never encountered a case with more than two victims, and that she had never seen one in which drowning was the cause of death.

The government is under no obligation to prove motive at a homicide trial. As co-prosecutor Laurie Lacelle told the jury in her closing address: “It is not your task to determine whether or not these are honour killings … The Crown does not have to prove what kind of murder this was—just that it was murder. Even without Mojab’s testimony, the Crown argues, there was plenty of evidence to convict, from the shards of headlight to Shafia’s recorded rants.

On June 20, just 10 days before the women were discovered underwater, someone conducted a Google search on the family’s Toshiba laptop: “Where to commit a murder.”

“The Crown presented an overwhelming case of planned and deliberate murder,” the factum says. “While all four victims were very different, they had one thing in common: they all wanted to leave the Shafia home. This was unacceptable to the appellants.”