'Charitably put, the evidence of guilt was overwhelming,' reads an Ontario Court of Appeal ruling 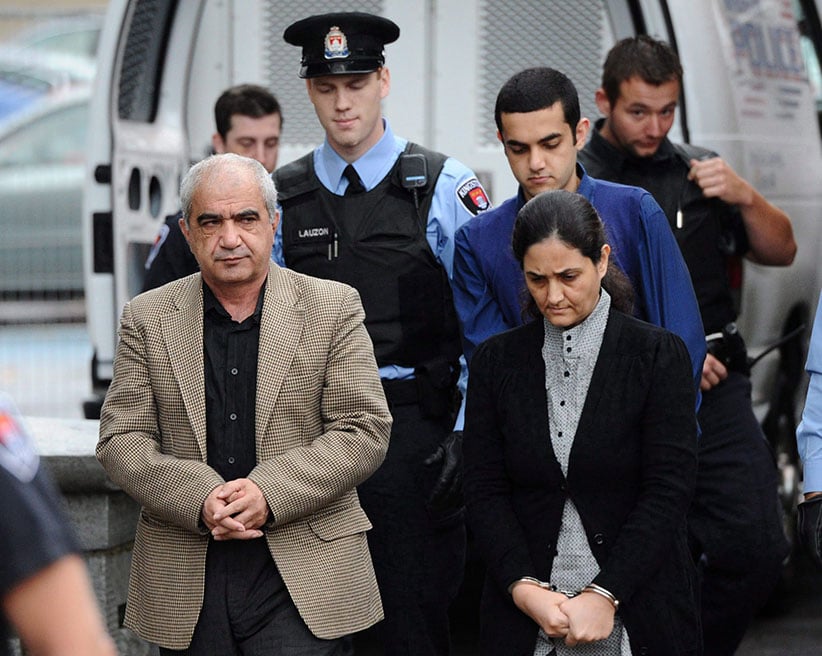 Tooba Mohammad Yahya, husband Mohammad Shafia and their son Hamed Shafia are escorted by police officers into the Frontenac County Court courthouse on the first day of trial in Kingston, Ontario on Thursday, October 20, 2011. (Sean Kilpatrick/CP)

Ontario’s highest court has refused to order a new trial for the Shafia family “honour killers,” ruling Wednesday that “the evidence of guilt was overwhelming” and their convictions should stand.

The notorious trio—father Mohammad Shafia, wife Tooba Yahya, and eldest son Hamed Shafia, all members of a wealthy Afghan family that immigrated to Canada in 2007—was found guilty nearly five years ago of orchestrating the mass murder of four other relatives: three of Shafia’s daughters (Zainab, 19; Sahar, 17; and Geeti, 13) and his first, infertile wife in their secretly polygamous clan, 52-year-old Rona Amir Mohammad.

The victims’ bodies were discovered floating inside a car at the bottom of Kingston Mills, a lock station on the Rideau Canal. Although the scene was staged to look like a tragic traffic accident, the truth quickly emerged: that the girls were murdered in June 2009 because their secret boyfriends and rebellious behaviour had tarnished the family’s supposed “honour.” (Rona was a convenient throw-in, killed with the others after a years-long rivalry with her fellow wife.)

The trial, which began in 2011, shocked the country and triggered headlines around the world. At one point, the jury listened to police wiretaps that recorded Shafia, days before their arrests, railing against his dead daughters. “Whores.” “Filthy.” “Treacherous.” “May the devil s–t on their graves!” During one conversation, he told Tooba: “There was no other way.”

In January 2012, all three were found guilty of four counts of first-degree murder and sentenced to life in prison with no chance of parole for 25 years.

Years in the works, their long-shot appeal hinged on two key arguments: that the testimony of an expert witness, a University of Toronto professor who researches honour-based violence, “created enormous prejudice” in the minds of the jury by reinforcing “pre-existing stereotypes of violent and primitive Muslims”; and that the defence had unearthed fresh evidence suggesting Hamed was 17 at the time of the crimes, not 18, and should have enjoyed certain protections under the Youth Criminal Justice Act. The Court of Appeal for Ontario flatly rejected both claims.

The U of T professor, Shahrzad Mojab, provided evidence that was “essential to the jury’s ability to understand and assess” the relationship between religion, patriarchy and violence against women in some Middle East cultures, the high court ruled. Most notably, she was never asked her opinion about the Shafia case in particular during her time in the witness box. “The notion of honour and of killing another person motivated by besmirched honour originated with Shafia, not with Dr. Mojab,” said Justice David Watt, writing on behalf of the unanimous panel, which also included Justice Peter Lauwers and Justice Gladys Pardu.

“[Shafia] repeatedly voiced his displeasure about how his deceased daughters had dishonoured the family,” Watt continued. “The deceased had betrayed their family, their tradition, their religion and the kindness shown to them by their conduct with boys and the way in which they dressed. Shafia was steadfast in his emphasis on the critical importance of honour. He claimed that there was no value in life without honour.”

Watt concluded: “The complaint that the trial judge overestimated the probative value of Dr. Mojab’s evidence is in the end, a thinly disguised invitation to reweigh the evidence because of a disagreement with the result.”

After the guilty verdicts, the Shafia family claimed to have discovered old identity documents that showed Hamed was born in 1991, not 1990 as originally believed. Among the records was a tazkira, an official I.D. issued by the Afghan government. The defence asked the appeal court to admit the fresh evidence, arguing it raises the possibility Hamed was improperly tried as an adult. (Lawyers representing Shafia and Tooba also argued that they deserve new trials. Because Hamed was originally tried alongside his parents, they claimed they were deprived the opportunity of calling him as a potential witness.)

“The origins of the tazkira are inherently suspect,” the court ruled. “The only source of information about the circumstances in which the document was created and discovered is the hearsay evidence of Shafia. As noted, we know naught about who created the document or who provided the information incorporated in it.” If the new birth date is accurate—Dec. 31, 1991—it would also mean that three of the Shafias’ other seven children had incorrect dates of birth because they were born one year after the other. “Apart from the inherent improbability of the claim that four of the seven birth dates are wrong, the assertion is contradicted by dated photographs and Tooba’s evidence at trial.”

Indeed, on the day she was arrested, Tooba was joined in the back of a police cruiser by a Farsi-speaking officer. Trying to keep her talking, the cop asked Mom about her beloved son.

“How old?” she asked again.

The Shafias’ lawyers have yet to comment on the ruling, so it’s not clear whether an appeal to the Supreme Court is being considered.