Sheila Anderson, Silver Cross Mother: ‘A group no one wants to join’

On Nov. 11, Sheila Anderson—who lost her son Jordan in Afghanistan—will lay a wreath on behalf of Canada's grieving military families 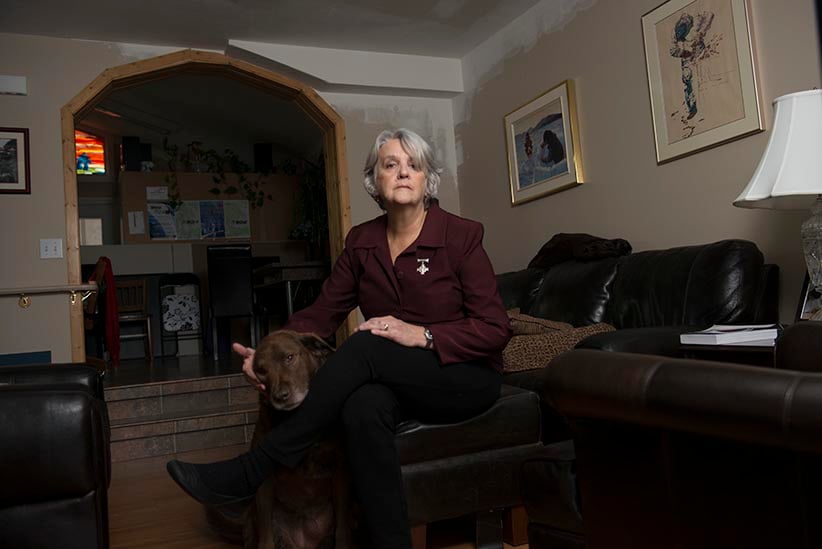 The 2015-16 Silver Cross Mother, Sheila Andrerson, in her home in Yellowknife. Anderson is the mother of Corporal Jordan Anderson, one of the six Canadian soldiers killed in a roadside bomb in Afghanistan in 2007. (Photograph by Patrick Kane)

When a mother loses her son or daughter in Canadian military service, the Canadian Forces awards her a Silver Cross medal (also called the Memorial Cross). Each year, the Royal Canadian Legion appoints one National Memorial Silver Cross mother, who lays the wreath at the Remembrance Day ceremony at the National War Memorial in Ottawa and performs other ceremonial duties throughout the year.

The Legion has given the title this year to Sheila Anderson, mother of Cpl. Jordan Anderson, who was one of six Canadians killed by a roadside bomb in Afghanistan on July 4, 2007. Sheila will be the first National Memorial Silver Cross mother from one of the territories. This is an edited transcript of her conversation with Maclean’s.

Q. Can you tell us a little bit about yourself?

A. I work at the territorial court in Yellowknife. I’ve lived in the territory for 40 years, and three of my four children were born here. Jordan was the oldest. I’m a cyclist, mostly long-distance. My parents and aunt all served in the Second World War. My father was a navigator who was shot down and did two years in a prisoner of war camp in Luxembourg. My mother worked in a chemistry lab for the army, and my aunt was in the navy.

Q. What was it like for you when Jordan was in Afghanistan?

A. The short answer, of course, is: very nerve-racking. I worried about him all the time. He was a daredevil since he was a child, so he followed his heart, in that regard. It’s not something we would have chosen. He joined the army before he told us, because he knew we wouldn’t approve. He was just a few courses away from earning his degree at the University of Manitoba. It was just after 9/11, and we wondered how the heck Afghanistan got involved in all this mess. We were pretty shocked, but he was a full-grown man and could make his own decisions. He was one of the first boots on the ground.

Q. What have you done on Remembrance Days in the past?

A. I’ve gone to local ceremonies every year since I was a kid. Jordan also went to the ceremonies with Boy Scouts from the time he was a beaver. He was very aware of what was going on in the world and in town; he was a newshound, and knew what Remembrance Day was about. But people have different perspectives. When I asked my aunt if she was going to the ceremony one year, she said, “Are you kidding? I spent 50 years trying to forget that.” She’s entitled to forget or remember because she served, but I think for anyone who hasn’t served, it’s up to us to remember.

Q. What goes through your mind during the moment of silence?

A. I think about all the people who are reaching out for help with PTSD and aren’t receiving it and, in fact, are having supports taken away. They have given up something to serve their country, and those people need something back now. They need equal opportunities, or even greater opportunities to live their lives after the time has gone. They need payouts for lost limbs and other injuries, and psychological supports should be readily available. Yeah, that’s what’s on my mind.

Q. Can you describe the moment you were told you were chosen as the National Memorial Silver Cross mother?

A. It was spring, but I was sworn to secrecy until the second of November. I was so deeply honoured that I’d been chosen. How could I not accept it?

Q. What will it be like to lay the wreath?

A. The National Silver Cross mother, she doesn’t have to worry about what’s going on around her, just accomplish the task. I’ll think about all the moms and families. We all have similar pain. It’s kind of sad to be a member of a group that no one wants to join. There will be a dress rehearsal the day before and, apparently, I’ll be available for interviews afterward. I don’t know who’s going to want to interview me. I’ve never really been able to speak about it publicly without crying, but maybe by then I’ll be numb.

Q. Would you like to say anything to other Silver Cross mothers?

A. This pain does subside over time, but it never goes away, so you have to find ways to deal with it. He died almost 10 years ago, but you can never get away from it. I say: Hang in and stay close to your family and friends. It doesn’t make it easier, but it helps you get through the day.

Q. What would Jordan have wanted Canadians to do on Remembrance Day?

A. He always thought the dead got too much attention. The living are the ones to be revered. Soldiers who get injured shouldn’t just be discharged and abandoned. But we have to make sure we remember the dead, so we learn. Otherwise, there was no point. I feel that war is wasteful, that we keep doing the same things and it doesn’t work. I don’t think anybody ever gained anything by killing each other. We have to remember the dead to learn from their loss. No one wants to have their children forgotten.