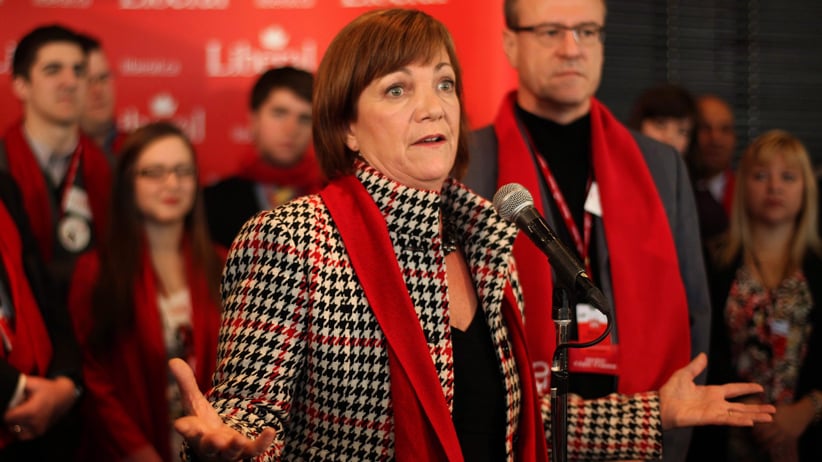 OTTAWA – Sheila Copps says she can empathize with two female New Democrat MPs who are reluctant to talk about their explosive allegations of inappropriate conduct by two of their Liberal colleagues.

The former deputy prime minister revealed Monday she was raped years ago by a boyfriend and sexually assaulted by a fellow legislator when she was a novice member of Ontario’s legislature.

Still, says Copps, the two anonymous New Democrats could take an initial step towards changing attitudes towards sexual harassment by lodging formal complaints about what happened.

“They have enough power in their own voices to be open and that’s how you change it,” Copps said in an interview Monday.

“It’s not as though this is an employee who’s at risk of being fired or demoted.”

That said, Copps stopped short of directly encouraging the pair to speak out.

“I think it’s their decision…. I’ve already made a comment about Jian Ghomeshi without having all the facts and I don’t want to repeat that.”

Copps initially defended Ghomeshi’s right to due process after the CBC radio star was fired for alleged sexual violence towards women. As many as nine women have subsequently come forward with allegations, including three who’ve formally complained to police.

In the midst of the Ghomeshi scandal, Liberal Leader Justin Trudeau last week suspended Massimo Pacetti and Scott Andrews from his caucus after a female New Democrat directly complained to him about “serious personal misconduct” experienced by herself and another NDP MP.

New Democrats have subsequently lashed out at Trudeau for “revictimizing” the women, although he was careful not to identify their names, gender or party affiliation. NDP Leader Tom Mulcair has said he knew about the incidents but did not pursue them at the request of the women, who didn’t want the matter made public.

In her own case, Copps did not tell anyone when — as a neophyte, 28-year-old Liberal member of the Ontario legislature — she was sexually assaulted by a Conservative colleague.

They were both members of a committee which had travelled to northern Ontario, ironically during a study of violence against women. Committee members had worked all day and gone as a group to dinner before retiring to their rooms, all booked in the same hotel.

Copps and her Conservative counterpart got off the elevator on the same floor, whereupon she said: “He literally jumped me and pushed me up against the wall and tried to start kissing me and fondling my breasts.”

“I did resolve it with use of my basketball skills by giving a knee in the place where it hurts. He never came near me again and that was the end of it.”

Copps said she never complained to anyone about the incident because she felt she’d dealt with the matter satisfactorily herself. She did write about it some years later in her first book on her experiences as a young, female politician in what was then an almost exclusively male preserve.

At the time, Copps was one of only six women in Ontario’s legislature.

Before entering the political realm, Copps did go to the police about being raped by a man she had been dating. The police advised her there was no point in pursuing the matter since it would be his word against hers and there was little likelihood of a conviction.

The police did, however, visit the man to let him know his behaviour was unacceptable and Copps got what she wanted, which was “to be protected from him.”

As an MP from 1993 to 2004, Copps said she was never sexually assaulted, although male colleagues often said inappropriate things to her, including having a Conservative MP call her a slut — in the House of Commons.

“When you’re a woman in a man’s world, that tends to come out more quickly than it would otherwise … I think that’s the nature of any workplace and you kind of have to find ways to manage it because there are going to be crude people everywhere.”

Today, Copps noted there are more women in politics and far less tolerance for sexual harassment or assault.

Kathleen Wynne, Ontario’s first female premier, said Monday that “it’s a good thing” that people like Copps are speaking up about their experiences.

“Then we need to make sure that we have a reaction that we can deal with those situations sensitively and appropriately,” Wynne said.

Copps approved of Trudeau’s decision to punt the two Liberals accused of inappropriate conduct, saying once an NDP MP complained directly to him, the Liberal leader had a duty to act.

“It’s not fair to suggest that he should be the recipient of the information and then do nothing about it.”

Nevertheless, she said the matter has exposed the fact that the Commons has no process for dealing with complaints by one MP against another or for ensuring an accused MP gets a fair hearing — unlike any other workplace.

Insiders do not expect any movement on the issue until Nov. 25, when the secretive, multi-party board of internal economy is next scheduled to meet. Liberals want a neutral, third party appointed to independently investigate the allegations.