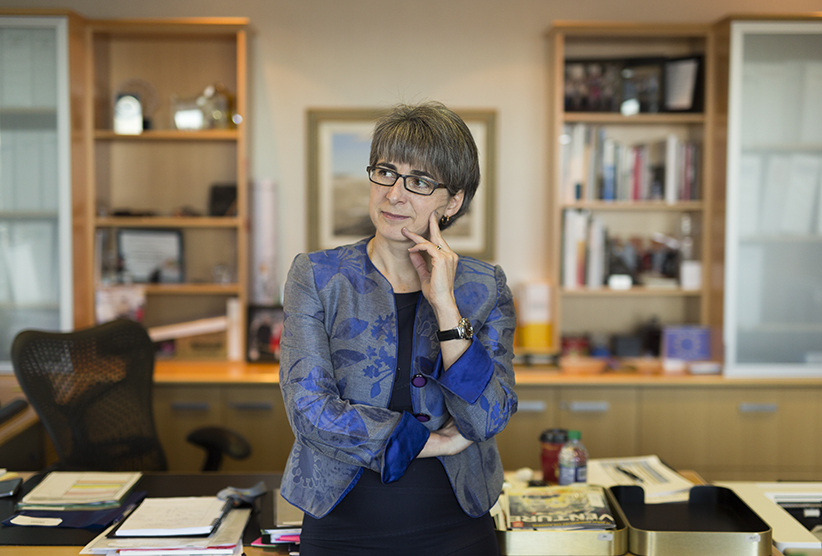 It was one of those rare, surprising moments in politics where pigs seemed to be flying in every direction. The Alberta government was announcing a carbon tax. Its oil sands regulations garnered praise from U.S. green groups that fought against the Keystone XL pipeline because of the oil sands’ unfettered growth. And standing alongside NDP Premier Rachel Notley when she announced this were not only members of Environmental Defence and the Pembina Institute, but also four executives from Canada’s largest oil companies who praised Alberta’s climate plan as historic. One of those oil sands leaders was Lorraine Mitchelmore, president of Shell Canada—one of the most vocal executives about improving her industry’s reputation through action. She will retire at year’s end.

Q: It’s been reported that this work started quite a while ago, with dinners between environmentalists and energy executives. Who was there?

A: I don’t want to say who was there. I want to say that it was some members of industry, and it was some members of the environmental groups, and it was really progressive members in both camps who were truly seeking to try and understand: What is the purpose? What are we trying to achieve? I think we all agree we all want to reduce emissions. It’s the “how.” We all start in anything like this with many different positions, with not a clear understanding of the other person’s position. Over the year we learned to understand that conflict was not going to achieve anything. What was striking on the environmentalist side was how much that we honestly did not believe that emissions would grow at a rate that they had believed.

Q: It took a change in two governments, it took years and years of the “dirty oil” tag, it took the Keystone pipeline rejection for this to finally crystallize. Why did it take that many years?

A: This was happening long before Keystone, so I wouldn’t put Keystone as the catalyst for this. Hydrocarbons are going to be around for decades. The demand is still going to double in the first part of this century. So our hydrocarbons are going to be needed, but it’s going to be at a reduced environmental footprint, and I think the whole industry realizes that. It’s just [that] technology takes longer. So why did it take so long? I think it’s a lot of conversations that have to be had, and I would look at [the announcement] as a real catalyst for change, where we have a nexus of government, civil society and industry coming together to really change the conversation. Before, we had many conversations. Were they purposeful? I’m not sure. Were they positioning? Probably.

Q: When you were sitting down, discussing with the group opposite [you], were there some walls or pretenses that had to come down?

Q: Would you have ever had expected in however many years you’ve been active on this that you would be happy with the same plan that made Al Gore happy?

A: [Laughs] I won’t comment on that, but what I will comment on is that five years ago, in 2011 when Shell celebrated its 100th anniversary, I came out with an op-ed in the paper then and I’ve been on this journey ever since I’ve been president at Shell, that I really advocated for a Canadian energy strategy. And one of the key components of that, what you really need, is a carbon price.

Over the years, I have worked very closely with a number of key environmentalists and our industry players, progressive energy players. I knew they actually wanted the same thing. So for me, to stand on that stage, with really my colleagues on all sides—it felt great after five years of advocating for something that I think is going to just position us so well as a country. I wasn’t going to retire until we did this. 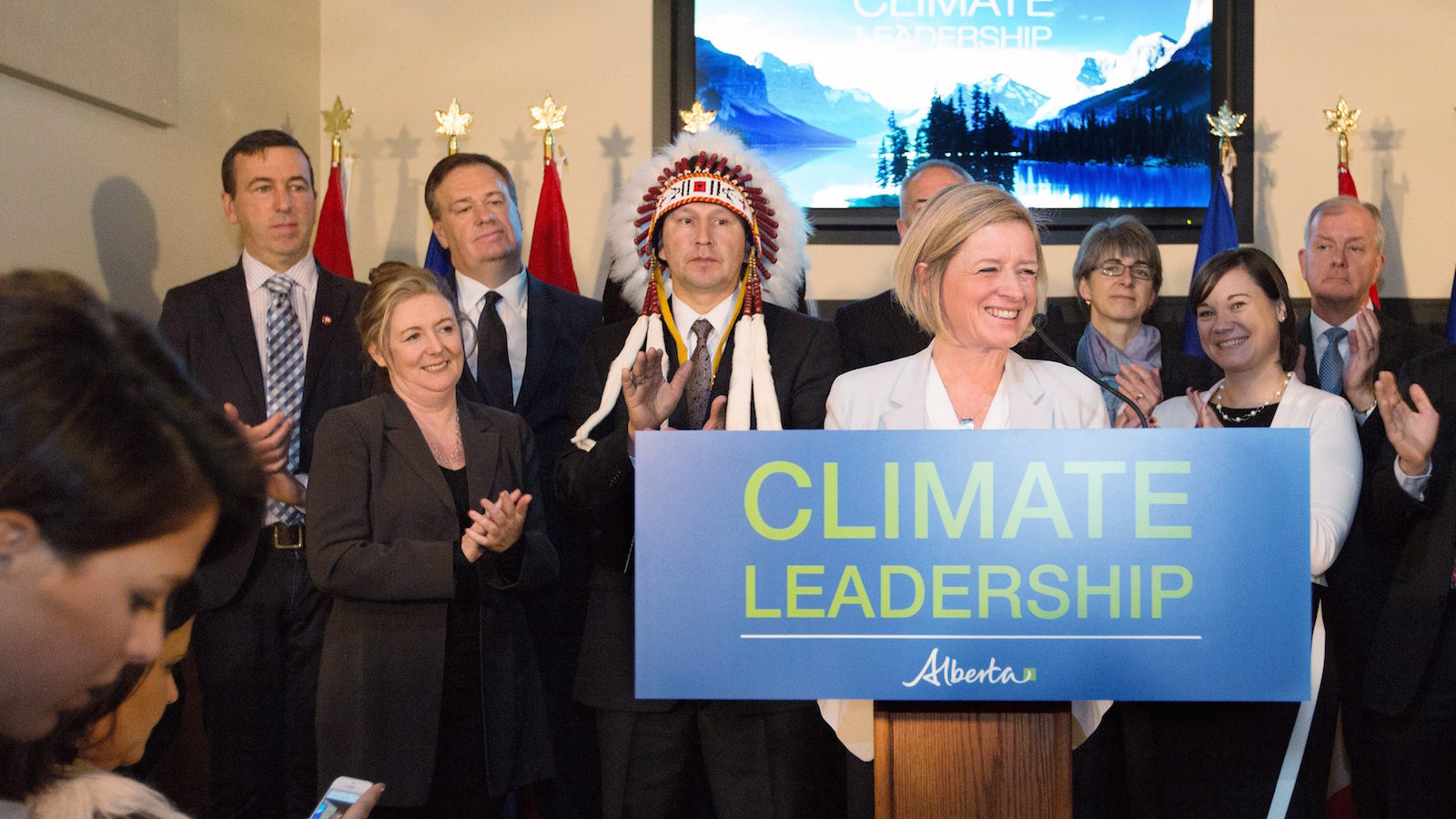 Premier Rachel Notley unveils Alberta’s climate strategy in Edmonton, Alberta, on Sunday, November 22, 2015. The new plan will include carbon tax and a cap on oilseeds emissions among other strategies. THE CANADIAN PRESS/Amber Bracken

Q: There were four executives up there. There were some players who weren’t there, or haven’t been as vocal: Imperial, Husky, Nexen. Why was there not broader buy-in, and what does it say that others weren’t sharing the stage with you?

A: Whenever you’ve got such a conflict like we have [had] for many years, it’s difficult to have all of industry working with that group of people. So I wouldn’t say industry wasn’t broadly on board: I would say we took a subset to see if we could make a breakthrough.

Q: It surprised people enough that some of the NDP critics were trying to figure out what this was. The Wildrose Party said, “They’re just trying to prevent a shutdown.” Ezra Levant said this must be Stockholm syndrome. What would have been the consequences in your mind of not being as vocal?

Q: A month before this, Shell called off, for now, its Carmon Creek project in northwestern Alberta, citing, in part, the lack of pipeline access. Premier Rachel Notley and you and several industry players say we hope this climate plan helps pave the way for those pipelines. What if it doesn’t? What if the green groups and other people who helped with this plan and that social licence say this will not do enough to bring us to the global climate targets, and we need more?

A: The energy demand is going to double [between 2000 and 2050]. We need to find that supply. I don’t think renewables will solve all of these problems. We need to have fossil fuels. So our job is to make sure we reduce emissions of these fossil fuels. When I look at stopping the oil sands, why don’t we turn it a different way, and think about: How can we compete globally so [our oil] is actually the crude oil of choice? If we reduce emissions, why wouldn’t we be allowed to compete globally for that demand?

Related: An economist on what we know and don’t know about Alberta’s climate plan

Q: How much is your company’s future in Alberta going to be shaped by this, vis-à-vis the oil prices?

A: This industry is cyclical, and we’re in another cycle right now. We will come out of this cycle. Supply and demand will match up again. I’ve been in this business for 30 years, and this is, I think, the fourth or fifth time we’ve gone through this. We’ve developed these oil sands through $20 oil up to $100 oil.

If I look at back in time, the margins stay pretty close to the same, because costs rise with price. So I think the industry will readjust on that side, on the cost structure side with price. I think now what we’re doing is ensuring that we not only compete economically, but we actually compete environmentally as well.

Q: One of the things that was announced but not recommended in economist Andrew Leach’s advisory panel report was this idea of a global emissions cap for the oil sands. I understand that was negotiated or discussed by NGOs and industry. It allows the oil sands to grow by some 30 or 40 per cent [though plans are for much greater production expansion in that sector]. Why is it at that level and not something lower?

A: It actually shows that we believe in technology, and we believe we can grow this at a reduced emissions intensity. It’s putting our money where our mouth is, basically, that we’ll be able to grow. It’s the same in any policy. What is the outcome you want? Alberta doesn’t want unlimited growth in emissions, because it’s got a target. So let’s put a policy in place that says you can grow if you reduce emissions. It’s pretty simple.

Q: The regime for oil sands includes subsidies that will reward the top-performing projects. Shell’s Peace River is one of the most carbon-intensive projects. How will you draw emissions down to the point where it is not a net payer?

A: Peace River is a very old project; it’s 50 years old. It will end up paying more, and it should, because it’s a lower-performing asset. I think that’s the beauty of this policy. You can’t forget that we are incentivized by the very nature of the fact that energy efficiency lowers GHG and it also lowers cost.

Q: You have dozens of gas stations here in Alberta and also in B.C., where they’ve already had their carbon tax. B.C. has seen about a 16 per cent drop in overall energy use and that’s less activity at the pumps. Alberta has a rap as a province where they love their cars and big trucks. Do you expect to see the same sort of slowdown at gas pumps here?

A: I see price always affects behaviour. Even in our industry, we’ve got half the prices now and you can see different behaviour happening in the way we structure our business. Every policy has to be designed with the outcome that you want. Any price will affect behaviour.

Q: Some people might furrow their brows at a company president who’s speaking the virtues of a tax that will lower use of the product she’s selling.

A: We have been espousing this for decades at Shell. It’s the right thing to do.