When comedy crosses the line in Quebec 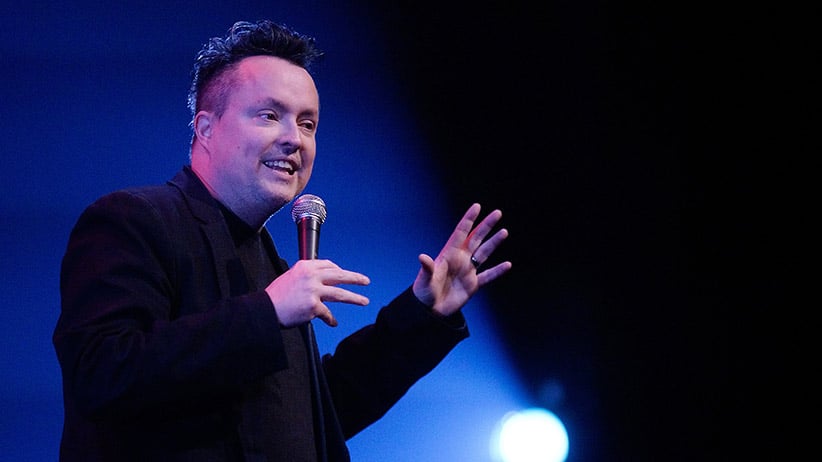 In 2009, Montreal comedian Mike Ward began performing a bit about Céline Dion in his stand-up routine. It began with him musing about the quality of the world-famous singer’s rumoured surgery. “Céline at 40 is super pretty,” he said. “At 11 she was a pony. My god she was ugly . . . Céline at 11 was disgusting.” So ugly, Ward then said, that even a notorious former talent manager, convicted of having sex with a minor in 2004, wouldn’t have tried anything with her. He ended with a laugh line known as a tag. “If I don’t have a lawsuit against me now, it’s not for a lack of trying,” Ward said.

It’s a harsh joke that crosses any number of lines. Stripped of Ward’s screechy drunk-witch delivery, it may also seem all the more cruel or unfunny. Humour is a wholly subjective form, though, and in Quebec, Ward’s Céline bit has been one of his most popular and enduring jokes. He began testing it out in clubs, and included it in a 2013 DVD of his live show, Mike Ward S’eXpose (“Mike Ward exposes himself”). The recording shows the audience firmly in his palm, laughing harder as the joke becomes more and more ungodly.

Ward estimates he’s done the Céline bit more than 250 times between 2009 and 2013, yet neither Dion nor her famously litigious husband, René Angélil, who died in January, sued him. Rather, it’s the bit immediately after that has landed Ward in the biggest trouble of his career.

In it, Ward essentially gave a similar treatment to Jérémy Gabriel, a singer who rose to fame at the age of eight when he sang the national anthem at a Montreal Canadiens game. “Everyone said he sucked, but I defended him,” Ward says. “They said he was terrible, but I was like, ‘He’s dying but he’s living a dream, leave him alone.’ ” The niceties end when Ward figures out Gabriel isn’t actually dying. “He’s unkillable! I saw him at the water park, and I tried to drown him, but I couldn’t. Then I went on the Internet to figure out what was wrong with him, and you know what it was? He’s ugly, goddammit!”

Here’s the rub. Gabriel was 12 years old when Ward started telling the joke. He also has Treacher Collins syndrome, which affects the development of facial features and typically causes hearing loss, among other ailments. His ability to sing, despite a severe hearing impediment, made him an instant star, and his audiences have included Pope Benedict XVI, Cardinal Marc Ouellet and, yes, Céline Dion. He has recorded an album and co-written a book about his life. 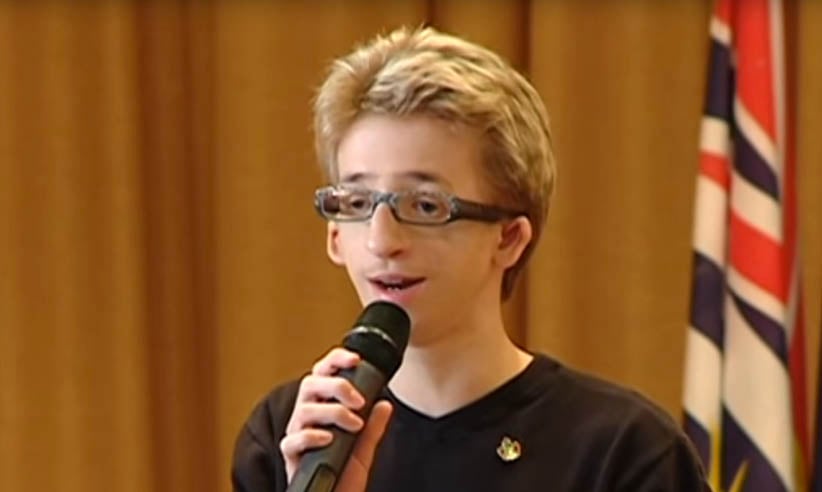 In response to the Ward bit, Gabriel’s parents filed a complaint with the Quebec human rights commission, which investigates purported transgressions against the province’s Charter of Human Rights and Freedoms. The commission deemed that there was enough evidence against Ward to bring the case in front of Quebec’s Human Rights Tribunal. The commission is now seeking $80,000 from Ward, in part because Gabriel was “hurt, vexed and humiliated” as a result of Ward’s jokes.

It’s the kind of drama that may be unfamiliar in Canada’s mainstream comedy scene, dominated as it is by breezy sketch comedy bits and light jabs against public figures. In 1988, comedy troupe the Royal Canadian Air Farce tittered at the Winter Olympics in Calgary, and the size of Brian Mulroney’s chin. That same year, Air Farce’s rough Quebec equivalent, Rock et Belles Oreilles, depicted Quebec premier Robert Bourassa as Adolf Hitler, marching unwitting anglophones to linguistic concentration camps. Comedian Yvon Deschamps’s rambling treatise on racism, language and belonging in working-class Montreal, first performed in the late ’60s, stoked collective, cathartic laughter in Quebec. Yet its title alone, “Nigger Black,” was enough to shock English Canada—and Anglo Quebec; in 1991, the Montreal Gazette deemed the bit “racist,” when in fact it is explicitly meant to be the opposite.

In Quebec, stepping over the line would seem to be part of the business. “English Canadians say their emotions, they don’t live them. Sometimes you want to hit an English Canadian, just to get an emotion,” comedian Guillaume Wagner says in one Just For Laughs show. “Hit them, or f–k them. Even then it doesn’t work. It’s like, ‘Oh, my god. Thank you for putting your penis in my vagina!’ ” Another comedian, Jean-François Mercier, sprinkles his intentionally buffoonish act with French-language obscenities. Until recently, he also had his own late-night TV show.

“Comedy is a very important medium in Quebec. After hockey, it’s comedy,” says comedian Eddy King, who performs in both English and French. “Many English comedians don’t like to offend anyone—they don’t want to look bad. If you came to Canada and only heard mainstream comedians, you’d think that racism and sexism don’t exist here.”

Few comics better encapsulate the difference between English and French comedy approaches than Ward. He is what comedian Charlie Murphy once called “a habitual line-stepper.” His targets have included talk show host Guy A. Lepage, musician Gregory Charles and a host of other luminaries who make up Quebec’s cloistered star system. Nor is Gabriel his first child target. He once used Cédrika Provencher, a nine-year-old whose disappearance in 2007 was heavily covered in the media, as the butt of a joke. His own mother, who died of lung cancer in 1998, fared only slightly better.

Though Gabriel and his family were troubled by the jokes at their expense, the audience response was as uproarious as with Ward’s treatment of Dion. The two-minute Gabriel bit has been viewed over 600,000 times on YouTube. A number of comedians have risen to Ward’s defence in the wake of the complaint. “Worst-case scenario, you can call this joke insensitive or mean. I don’t think it has any place whatsoever in a court of law,” said Michael Lifshitz, a comedian with congenital musculoskeletal abnormalities, said on CBC’s Radio Noon. (Quebec’s Human Rights Tribunal is in fact a court of law.)

Though he performs in both official languages, with similarly risqué takes, Ward’s English material is typically relegated to smaller clubs and the late-night corners of comedy festivals. In French, he sells out the 1,000-seat hall at Théâtre St. Denis. And he wants to continue to do so, which is why he is fighting the Gabriel family’s suit against him.

In person, Ward is a subdued counterpoint to his onstage persona, which is all gelled hair, big eyeballs and high-pitched squawks. Perhaps it’s due to the serious nature of the case. Ward has retained lawyer Julius Grey, who along with being a noted constitutionalist is among the more expensive lawyers in the province; he won a Supreme Court of Canada case regarding a Sikh student’s right to wear a kirpan to class. During the hearing, Grey portrayed Ward as a free-speech martyr, and warned about the dangerous precedent should the tribunal rule against him. Commission lawyer Marie Dominique, who represents Gabriel’s family, portrayed Ward as a bully who traffics in mean-spirited stereotypes.

The tribunal’s decision is expected in five months. Whatever the ruling, Ward is in a sense both martyr and bully. Again, what’s funny varies wildly, depending on the audience. For comedians of Ward’s ilk, the blessing and curse of the art form is that that audience is now far larger than the people who purchased tickets to his show. According to the Gabriels’ brief, the family only found out about Ward’s bon mots after the fact, following Ward’s appearance on a popular Quebec talk show. “The difference between the Céline and Jérémy bit was that with Céline, I was punching up. But with the kid, I was punching down. In the court of public opinion I already lost,” Ward says.

Through his agent, Gabriel declined an interview request, citing the pending tribunal decision. In the legal brief, Gabriel, who is now 19, said he was “mocked and intimidated” at school as a result of Ward’s humour, so much so that he considered dropping out of high school. The proposed penalty, which is set by the commission, would see $50,000 go to Gabriel and $30,000 to his parents.

Ward says he’s less concerned about the family’s financial claims than the principle at stake. “I would rather give $50,000 to Julius Grey than $5,000 to the Human Rights Tribunal,” Ward says. “If I lose, the [tribunal] will start going after comedians.”

Jérémy Gabriel himself publicly made light of the Ward debacle, when he appeared in a commercial for (the decidedly inoffensive) Quebec comedian Philippe Bond. “It’s the best show I’ve even seen!” Gabriel says, after Bond promises his show will be devoid of personal attacks.

There is little precedent for Ward’s case, though a 2011 decision by the B.C. Human Rights Tribunal compelled a comedian to pay $15,000 after he responded to heckling with a series of slurs against an audience member, though in that case there was also a physical altercation. Part of Ward’s shtick is that he can get laughs from words that seem perfectly abhorrent on the page. Think his treatment of Jérémy Gabriel is harsh? You should hear, not read, his bit on African orphans.