Should prison inmates be forced to wear jail uniforms?

A Newfoundland inmate raises the question about corrections-mandated clothing as it joins provinces like Ontario, B.C. and more 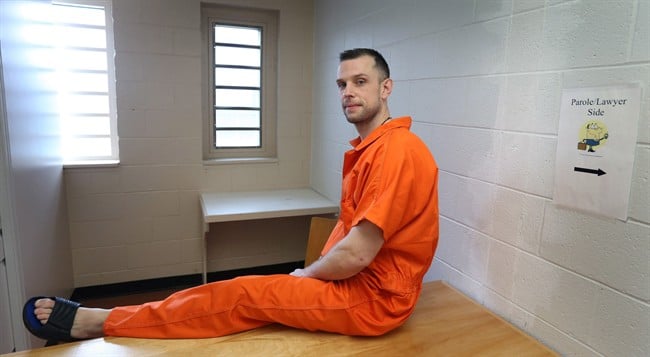 Inmate Kevin Roberts is shown at Her Majesty’s Penitentiary in St. John’s, N.L. on Tuesday, March 29, 2016. Inmates at the penitentiary started wearing standard-issue jumpsuits, shorts, T-shirts, underwear and sneakers this year in place of their own clothing in part to curb contraband and related bullying. (Paul Daly/CP)

“We’re here to rehabilitate people, right?” he said as he sat in a small interview room in Newfoundland and Labrador’s largest jail. “The clothing is not helping. Absolutely not.”

Inmates at the penitentiary started wearing standard-issue jumpsuits, shorts, T-shirts, underwear and sneakers this year in place of their own clothing in part to curb contraband and related bullying.

The province has joined several others including Ontario, B.C., Saskatchewan and Nova Scotia where inmates are clothed by corrections.

“It absolutely makes the institution a safer place for inmates and staff,” said Owen Brophy, superintendent of prisons for Newfoundland and Labrador.

“We’ve had trouble before with contraband drugs being smuggled inside the clothing, cutting apart seams, placing drugs into it and then sewing them up again, taking the soles out of sneakers and shoes and re-gluing them.”

Everything from needles to handcuff keys have come into the penitentiary with the help of inventive sewing, Brophy said.

“We had a huge problem with inmates bullying and assaulting other inmates, basically taking their high-end clothing such as sneakers, shirts and work-out clothes.”

Inmates can still buy running shoes through the jail’s canteen but other items are now provided using about $100,000 earmarked in last year’s provincial budget, he added. It’s a pilot project at Her Majesty’s Penitentiary that he’d like to see expanded to other correctional sites around the province.

Ottawa also issues clothing for inmates of federal jails — those serving sentences of two years or more — but takes a different approach.

“I kind of cringe to say ‘uniform,'” said Ghislain Sauve, director general of technical services and facilities for Correctional Service Canada. He oversees 43 institutions from B.C. to Nova Scotia, housing about 14,000 men and 650 women.

Male inmates across the country get a standard set of items. They include jeans, light green T-shirts, golf shirts and underwear that they’re responsible for washing.

Prison-issue clothes help staff distinguish inmates from volunteers, maintenance workers and other visitors, Sauve said in an interview. Federal inmates also make much of the clothing, as part of prison employment programs.

“We have standardization so we can tell who’s who, but we haven’t gone to the point of giving them a jumpsuit and all that. We still want people to wear clothes that are recognizable for them as clothes, as opposed to something that they would only wear in an institution.”

A key goal is to limit the extent to which inmates dissociate from the communities most of them will at some point re-enter, Sauve said.

“We want to ensure, to the degree that we can, that we help the offender rehabilitate and make his or her way back into society.”

Sauve said there is no standard clothing for the relatively small number of female federal offenders. Dress codes in women’s prisons are set by local wardens, he explained.

A growing body of research suggests that clothes do, in fact, affect how people think and feel. A study last year co-authored by Abraham Rutchick, a psychology professor at California State University, Northridge, found that formal clothes such as a business suit make the wearer feel powerful while broadening responses to cognitive tests.

“If you’re wearing a lab coat that you think is a doctor’s uniform, you act more like a doctor,” he said in an interview. “You’re more detail-oriented and attention-oriented than if you think that’s a painter’s coat.”

That said, Rutchick stressed it’s understandable that security trumps such considerations when it comes to prison wear.

Drew Wilby, executive director of corporate affairs for the Saskatchewan Ministry of Justice, said inmates weren’t happy when the province introduced grey tops and green pants in 2008 to replace outside clothes. As in Newfoundland, the move was to help limit contraband and gang intimidation, he said in an interview.

“In the initial stages, there was some concern raised by the inmates in terms of personal freedom and personal liberties,” he recalled. “The safety and security of the facility of course takes precedent.”

Roberts, a repeat offender whose drug habit and “addiction to money” landed him in jail for armed robbery and flight from police, agreed there has been less “muscling” for coveted items. But he said the change has increased tensions in other ways, cutting physical activity such as basketball games because the handout running shoes have little support or don’t fit well.

“I used to wear a $50 pair of jeans and a $90 shirt. I’m not bragging or anything, because there are guys that like to wear Bluenotes too and they’re comfortable with that. It’s just what I was comfortable with.”

Roberts believes bringing back street clothes would save the cash-strapped province money while also giving inmates back something vital.

“You can take away our freedom. But to take away our pride, our dignity, our self-respect with regards to our clothes, it’s like the one last thing that you have.”