Should you let your kids drink at home?

Some parents think it’s the safest option; experts aren’t so sure 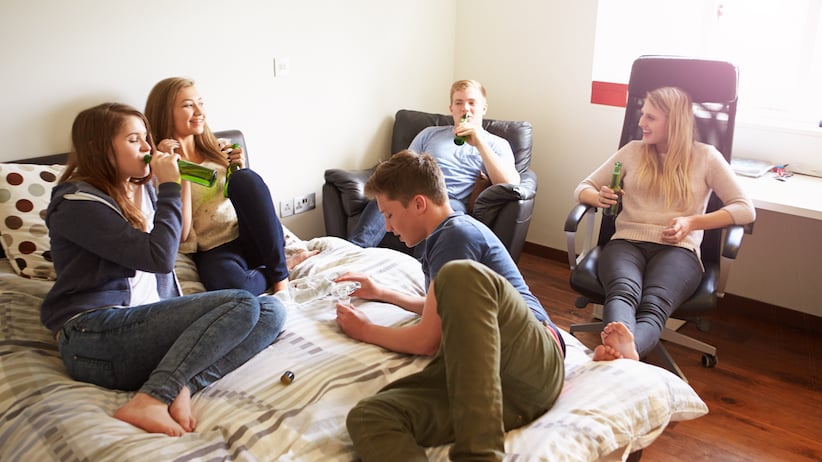 Chris Seger knew her son Sean would party hard the night of his graduation—and she knew she’d start worrying the moment the door clicked shut behind him. So the Calgary mom took matters into her own hands, inviting the entire class of 2007 from Sean’s small high school to her acreage west of the city for the post-convocation bash. There, with the help of a couple of other parents, she assembled an environment for teenage boozing that Elmer the Safety Elephant himself might have endorsed. “When the kids got here, they handed over their keys and we closed the gate behind them,” she recalls. “We had a barbecue. We gave them some fruit. We set out cases of water so they wouldn’t get dehydrated. We told them all that if at any point they didn’t feel comfortable, they were welcome to come into the house.”

Seger stopped short of actually supplying alcohol; about half the kids who attended had not yet reached Alberta’s legal drinking age of 18. Still, the 20 or so partygoers seemed to have a good time. Many brought liquor, and as the night wore on, the teens crashed in tents set up in the yard. As Seger made fried-egg sandwiches the next morning, a still-tipsy boy approached her to show off a pocketful of bottle caps—one for every beer he’d quaffed. “I think the kids just wanted to have that experience,” she says. “Our thought was, let’s just make sure they’re safe.”

The party was Seger’s answer to a question thousands of parents across the country will be asking themselves as graduation time nears: if you know your teenagers are going to drink, is it better to let them do so at home, under your watchful eye? Few share the Alberta mom’s sense of certainty. Caught in a blizzard of conflicting theories and social pressures, adults are spooked on the one hand by the spectre of their youngsters heading off to bush parties—or to some stranger’s place where the parents aren’t home (What if they climb into a car with a drunk driver? What if they over-drink and need medical help?). Yet the stigma attached to chaperoned boozing remains as powerful as ever. Neighbours frown; some complain, which can lead to police paying unwanted attention. Health care professionals warn about nudging young people toward alcohol before they’re ready to cope with its effects.

Even advocates of so-called “safe partying” stop short of endorsing what seems the surest safeguard of all. “Supervised drinking,” as it is sometimes called, may be reducing the risk of physical injury, says Candace Lind, a nursing professor at the University of Calgary. “But you’re also sending the message that it’s okay for them to drink.” Lind is no hard-liner: her version of safe partying for teenagers entails emergency contact numbers and rock-solid arrangements for sober transportation. In short, she too recognizes that teenagers are going to drink. Yet her ambivalence highlights the depth of the dilemma. If someone who has made a study of teens and drinking feels unqualified to pass judgment on the practice, what’s a parent supposed to think?

Since the temperance movement of the late 19th century, the nation’s youth have been at the centre of public policy tugs-of-war over alcohol—alternately cast as innocent lambs in need of protection and hedonists requiring control. But as attitudes toward liquor have softened, the emphasis has steadily shifted from stopping underage drinking to mitigating its toll—a toll that remains stubbornly high. Nearly one in four teenagers who die behind the wheel each year are over the legal alcohol limit, while fully 26 per cent of Ontario teens polled in a 2007 study said they’d been driven at least once in the last year by someone who had been drinking. One in 10 high school students, meanwhile, is likely to have unplanned sex while under the influence of alcohol, according to a recent federal government report, and experts almost universally cite liquor as a leading risk factor for sexual victimization of teenage girls.

This dismal ledger has changed little in the past couple of decades—a sad truth that is reinforced by a parade of tragedies every graduation season. Last June, an 18-year-old boy who attended a bush party near Regina was killed while trying to steal a lawn tractor from a nearby golf course; at about 3 a.m. he crashed into a chain-link fence. The incident made national headlines, yet four days later, in West Vancouver, a Grade 12 student was critically injured while drunkenly joyriding around a parking lot in an SUV during another impromptu celebration. Similar tales of tragedy unfold each year.

Small wonder, then, that some parents have begun questioning the orthodoxy behind zero tolerance. “If the statistics aren’t changing, then that tells me the status quo isn’t working,” says Tim Clarke, a 45-year-old graphic designer from Halifax with two teenaged kids. “I think if my 17-year-old came to me and said she’d like to have some friends over and have a few beers, I’d be inclined to consider it.” At the heart of this argument lies classic harm-reduction theory: if you can’t stop the sin, you might at least safeguard the sinner. But that’s been supplemented in recent years by the notion that parents can encourage responsible drinking by removing the aura of mystery surrounding booze—an old idea that has gained new life as today’s generation of parents embraces softer, more social forms of drinking. “Might forbidding even a taste of wine with a meal actually encourage secrecy and recklessness?” Eric Asimov, the New York Times wine critic and a parent of two teenaged boys, wondered last year in a widely emailed column. “Some experts think so.”

Actually, some experts go a good deal further. One 2004 survey by researchers at Wake Forest University in North Carolina found that teens who engage in some drinking with their parents were only one-third as likely to indulge in heavy drinking as those who don’t. (Heavy drinking was defined as five or more consecutive drinks in the two weeks before the kids participated in the survey.) Another oft-cited study, published in 1983 by Harvard psychiatry professor George Vaillant, found that men who grew up in families where alcohol was forbidden were seven times more likely to be alcoholics than those who came from families that served wine at meals.

Those numbers sound convincing, but they’re still not enough to persuade many clinicians to publicly endorse supervised drinking. Shervin Vakili, a University of Calgary psychologist who works at the Calgary Health Region’s addiction centre, points to a 2007 Swedish study that flatly contradicts the Wake Forest and Harvard research, concluding that permission to drink at home increases the chance kids will engage in binge-drinking. Vakili, who specializes in addictions and family conflicts, believes the “ripple effect” of parental endorsement is to encourage kids to experiment further. “It really confuses them to mix the message this way,” he says. “When kids reach adolescence they are going to engage in some rebellion. Your job as a parent is to rein that in. Your job isn’t to be their buddy and provide them with a drinking spot.”

To David Teplin, a clinical psychologist from Richmond Hill, Ont., whether you allow your teenagers to drink at home is a lot less important than the sort of conversations you have with them about alcohol. “This includes what constitutes responsible drinking, how alcohol affects the body, what constitutes impairment,” he says. Parents considering giving liquor to their teenagers must first consider a raft of variables, adds Teplin, who chairs the substance abuse section of the Canadian Psychological Association. These range from the mental capacity and maturity of the child to the history of drunkenness in the family. “If mama, papa and granddaddy drink a two-four every Friday night,” he points out, “their definition of responsible drinking may be to have 14 beers.”

Similar doubts prevail in mainstream Canadian society, which is nowhere near to ushering teenagers into the culture of drinking the way some European countries do. While most provinces allow adults to supply alcohol to their own kids in the privacy of their own homes, plenty of parents nevertheless opt for zero tolerance. Patty Wilson, a 45-year-old mother in Fredericton with two teenagers, has kept her house dry since her kids were born—even though she and her husband are not teetotallers. “It was just something that I didn’t want my kids to grow up with,” she says. “My son’s 19 now, but I still won’t let him and his friends drink in the house. I told him that’s what bars are for.” Wilson believes her inflexibility has paid off: both of her children seem to have got the message that it’s possible to enjoy life without first having a few belts. And while she doesn’t criticize parents who do host parties, she still doesn’t let her 16-year-old daughter attend them.

Others are more vocal. Alison McVeigh, a public school trustee in Langley, B.C., learned this the hard way after hosting a grad party for her son Marc and his friends two years ago, after which a 17-year-old boy who attended was shot and stabbed at another location. When accounts of the incident made the media—along with descriptions of the empties strewn on McVeigh’s lawn—her constituents hit the roof. “I know that [my daughter] has gone to parties and there’s been drinking,” one woman with a daughter in Grade 12 said during a raucous public meeting the following week. “But I think if you’re a trustee, you should just step down.”

McVeigh’s long record of civic service saw her through the crisis; she was re-elected to the board last year (she did not return calls from Maclean’s). Still, her experience highlights the pitfalls of trying to be the “cool” parent who lets the liquor flow under their roof. No matter how carefully you control the merriment, some kids are going to take full advantage of the chance to get loaded. Any lapse in control, meanwhile, can quickly unleash unintended consequences. Such was the case in Dauphin, Man., two months ago, when a couple held a party for their 18-year-old son. Eighteen is the legal drinking age in Manitoba, but younger people attended, and at some point a 15-year-old girl wandered outdoors into the icy Manitoba night. How much she’d been drinking is not yet clear, but she became disoriented, fell down and froze to death in a vacant lot. Police are now contemplating charges against the adults for supplying liquor to minors.

It was just that sort of scenario that Chris Seger, the Calgary mother, had in mind when she laid the ground rules for her party. The event was limited to grads of the school, Foothills Academy, and all the partygoers needed consent from their parents. She insisted that no one leave until morning, unless they were picked up by their folks. Seger had never hosted such a party before, so the success of the event came as something of a surprise. To keep a score of teenagers safe, while sending them home happy, was proof that it is possible to walk the line between accommodating your kids’ curiosity and indulging them. Then again, she wouldn’t want to do it often. It was a lot of work, she admits, and an enormous responsibility—testimony, you could say, that walking that line will never be easy.