Quebec election: Sit back and grin 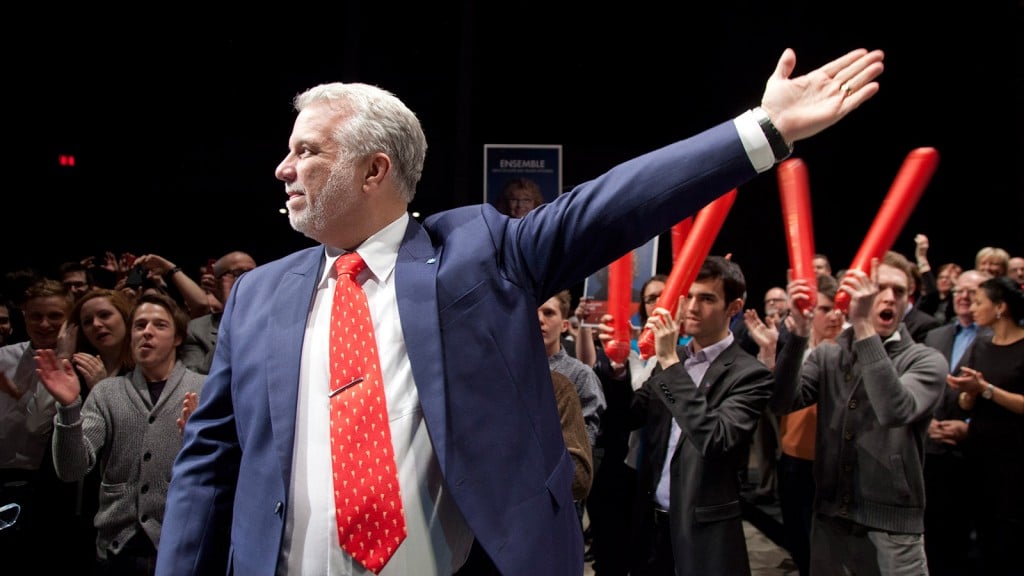 If there’s a home base for the Liberal Party of Quebec, it’s Montreal: multi-ethnic, cosmopolitan, heavy on anglophones and immigrants, a place where Quebec’s leading federalist party can always be assured of winning many seats even when the going gets rough. At least one big rally in Quebec’s metropolis is a fixture of every provincial Liberal campaign.

But the going has not been rough for Philippe Couillard this year. So on a recent Saturday night, 24 hours after he dominated the first televised leaders’ debate—and with about two weeks to go before election day April 7—the Liberal leader permitted himself a little variation on the routine. The Liberals usually hold their rallies downtown or a little west, in business-friendly precincts where Liberals usually win. But Couillard convened his troops at Usine C, a stylish black-box arts auditorium in an old industrial building in the overwhelmingly francophone east-end riding of Sainte-Marie-Saint-Jacques. The Parti Québécois has held the riding, without interruption, since it was created from parts of two other ridings in 1989. But Couillard has spent much of this campaign on his adversaries’ turf, so this is where he came to stand with 60 Liberal candidates behind him and 500 cheering supporters in front, to proclaim it is time for Quebec to turn Liberal again.

He’s been leaning into PQ territory like this all month long. He is abandoning the Montreal riding he won just four months ago in a by-election to run as a candidate in Roberval riding, in the Lac-St.-Jean area north of Quebec City, an area where this born Montrealer has never lived or worked, a riding the PQ has held for 16 of the past 20 years. Softspoken and urbane with a tidy grey beard, a neurosurgeon who entered politics for the first time in 2003 and who lasted barely five years before retiring from the National Assembly in 2008, Couillard does not cut a dashing figure. He offers none of his predecessor Jean Charest’s fiery oratory. But if a string of polls are to be believed, he has a good chance of leading the Liberals back to power, less than two years after Pauline Marois defeated Charest’s scandal-plagued government.

“Economy. Jobs. Education. Health. For our future, the future of our Quebec and our young people,” he said. “And we’re going to do it together!”

The crowd clapped its inflatable thundersticks together and hooted happily through plastic vuvuzelas. If quizzed on what Couillard had said five minutes after he finished talking, they might not have been able to offer much detail. There wasn’t a lot to retain.

But beyond the amiable generalities of the rest of his speech, Couillard made one thing perfectly clear: He will not hold a referendum on separating Quebec from the rest of Canada, and Pauline Marois will. “We have a homeland—it’s Quebec,” he said. “It’s the homeland of every Quebecer. And we have a country, Canada. We want it all! You won’t take any of it from us!”

The crowd roared, the thundersticks collided, the plastic horns hooted. Here was the essence of Couillard’s campaign appeal: that Liberals would take care of “les vraies affaires,” the real issues. It’s the slogan on his website and his campaign bus: “Ensemble on s’occupe des vraies affaires.” He says he got the line from ordinary Quebecers as he toured the province.

As campaign messages go, it’s thin gruel. What is Couillard’s signature policy proposal? He doesn’t have one. What would he do in his first 100 days as premier? It’s hard to say. He hasn’t had to fill in the blanks. He might have, if his main opponent, the incumbent PQ Premier Pauline Marois, had not spent most of this campaign running her party into the ground.

On March 9, the campaign’s fifth day, Marois stood beside the billionaire media baron Pierre Karl Péladeau at the old train station in St. Jerome to announce Péladeau was the party’s new star candidate. It should have been a triumphant moment. It didn’t feel triumphant for one minute. For a guy who was famous as a tough boss when he was CEO of Quebecor, Péladeau was visibly nervous. More than that. He was a wreck. At Quebecor he had entire divisions of staffers who knew, if they knew nothing else, they had better not upset the boss. Now he actually needed people to like him. It would require strengths he might not have. It weighed on him, you could see it. He thanked his estranged partner, Julie Snyder, who had given him the green light to run. It was a touching human moment but it didn’t exactly sweep the crowd to its feet. At the end, when he announced he wanted to make Quebec an independent country, he punctuated the statement with a little fist-pump. It was his best effort to give the moment a little life. The crowd of PQ activists burst into applause. Marois beamed. The union-busting billionaire’s smile widened a little, and he seemed, at last, to relax.

In fact, with that anemic little hand gesture, he had pushed the entire PQ campaign off a cliff. Many Quebec voters had apparently hoped they could somehow re-elect a separatist party without electing a bunch of separatists. Péladeau’s headline-grabbing arrival, along with that little fist pump, clarified things that were so obvious it’s hard to believe they needed clarifying. Turns out that voting for separatists gets you separatists. Yikes! Marois has tried to calm the skittish median voter by saying there will be no referendum “as long as Quebecers aren’t ready.” But of course, if she were premier, she would judge their readiness. She cannot bring herself to simply rule out a referendum. There is a black hole of uncertainty at the centre of her campaign. Quebecers have recoiled from the PQ, not en masse, but in sufficient numbers to send it into a public-opinion nose dive.

All of which makes Couillard’s life these days weirdly easy. He had planned for contingencies; he’s a brain surgeon, after all. Sources close to the Quebec Liberal campaign said he undertook an intensive candidate-recruiting process after he became Liberal leader a year ago to prepare for any issue that might dominate a campaign.

As a doctor and former health minister, Couillard risked being judged weak on economic issues. So he rounded up three prominent economists to run as Liberals: Laurentian Bank economist Carlos Leitao, Jacques Daoust from the provincial investment bank, and Martin Coiteux, a university instructor and Bank of Canada economist. A (slightly eggheaded) economic dream team to roll out in the event of a battle over budgeting. But there’s been no such battle.

Or maybe the campaign would be about health care. There Couillard had an advantage, of course, but he also had Yves Bolduc, a general practitioner and coroner who had replaced him as Charest’s health minister, and he recruited Gaétan Barrette, a colourful and outspoken radiologist who had clashed with Couillard on many occasions. A health care dream team. But there’s been no health care debate to speak of.

Or maybe the PQ would try to stir up unease over a possible return to the bad old days of the Charest government. But with these fresh recruits and a few others, Couillard could have run all kinds of ads showing only new faces (leaving the many old Charest faces who fill out his candidate roster discreetly offscreen). But the PQ has been listless in prosecuting the Charest record.

So Couillard has parked his best-laid plans and improvised a two-note campaign. The first is his emphasis on les vraies affaires. Let the PQ talk about referendums and the charter of values, which would outlaw prominent religious garb in the public service. The Liberals will, in the manner of Stephen Harper in 2011, make a great show of focusing on the economy.

The other pillar of Couillard’s campaign is the first word, so easy to overlook even though it’s the largest word on the side of his bus: ENSEMBLE. Together.

Under Marois, the PQ has devoted itself more or less full-time to identity politics. Its charter amounts to a long list of people who mustn’t be permitted to dress the way they’d like. Its preoccupation with secession makes senior ministers fret about how many anglophone university students might manage to vote. It has one candidate, a philosophy professor named Louise Mailloux, who has compared baptism and circumcision to rape and who believes kosher certification is a global Jewish plot to finance Israeli settlements in the West Bank. It has a higher education minister, Pierre Duchesne, who has publicly wondered why Quebec keeps a place like McGill University around, since so many of its graduates just leave the province anyway.

Whatever else one might say about all these policies and viewpoints, they certainly seem to take up a lot of the PQ’s energy and time. In his campaign videos, Couillard says the PQ “invents fake problems to hide realities.” For Liberals, “there is only one kind of Quebecer: first-class citizens, whatever their origin, who share Quebec identity and are as proud of it as any Quebecer is.”

There is an odd and paradoxical echo in this discourse—the promise of a future, suddenly tantalizingly close, in which interminable debates over right and wrong ways to be a Quebecer might end. Almost 20 years ago, Lucien Bouchard transformed the 1995 referendum campaign by promising voters that a Yes vote would lead to “la fin des chicanes,” the end of quarrels. That campaign didn’t end the way Bouchard wanted. A generation has grown up since then. But the hope that electrified Bouchard’s campaign persists, unrequited. The last few years have been brutal—corruption scandals, street protests, hefty new rulebooks that set sect against secular. Couillard is offering Quebecers la fin des chicanes. As such, he is campaigning on unfamiliar ground. He is taking his campaign into PQ territory, not just geographically but emotionally: He has seized, at least for now, the high ground of hope.