The look of B.C.'s next government is as uncertain as it was before votes were tallied, but here are some possible outcomes 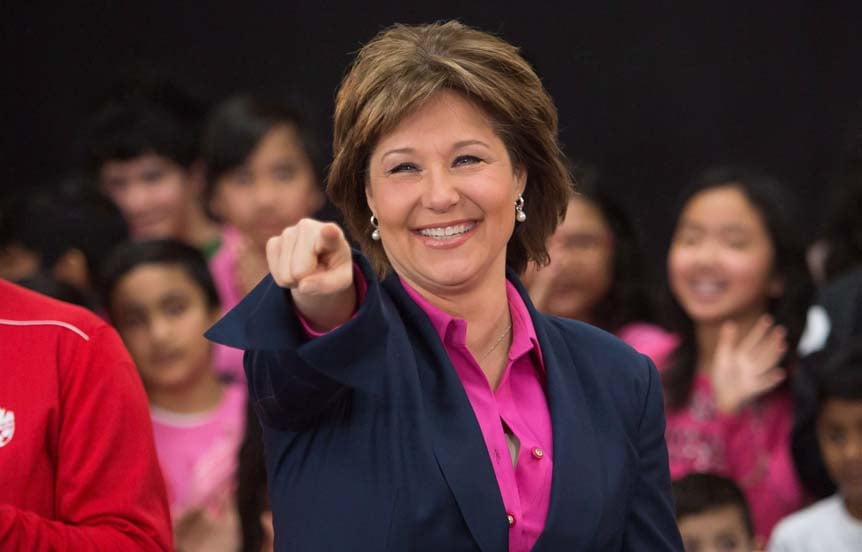 While others like Ontario Premier Kathleen Wynne gave Christy Clark kudos for a victory, Alberta Premier Rachel Notley eschewed any normal congratulations in favour of a hooray-for-everyone statement following the B.C. election results: “I want to congratulate Premier Christy Clark, John Horgan and Andrew Weaver on their campaigns in British Columbia. I look forward to working with them…”

Well, it is true they did all complete their campaigns and they all won their own seats, so back to the legislature in Victoria they go. It’s also true that any one of those three could wind up governing British Columbia, with the Liberals’ Clark or NDP’s Horgan serving as premier, and the newly empowered Green leader Weaver with the potential to become kingmaker and/or cabinet minister.

READ MORE: Nine voters who could have swung the B.C. election

“We have been presented with an opportunity by British Columbians to open a whole new dialogue in our province, in our legislature… tonight is the start of something very different,” Clark said after midnight Wednesday, in what wasn’t quite a victory speech.

That dialogue seems destined to take place mostly behind closed doors; voters can at best hope for ultimatums and cryptic hints to reach the public. With 43 Liberal, 41 NDP and three Green seats at current count, the look of British Columbia’s next government somehow seems as uncertain as it was before votes were tallied.

Here is a brief guide to the potential outcomes, guided by Richard Johnston, a University of British Columbia political scientist who holds the Canada Research Chair in Public Opinion, Elections, and Representation.

Speculating about the various permutations of B.C.’s first minority government since 1952 will be quickly mooted if Clark’s party picks up one more seat once all the votes are counted later this month. NDP edged the Liberals by only nine votes in Courtenay-Comox, making it highly possible that absentee ballots flip the result. With 176,000 absentee vote envelopes collected by Elections B.C. and not yet counted, several hundred at least would have been cast in that Vancouver Island riding. There are also chances (albeit lesser ones) of lead changes in two Lower Mainland seats: Maple Ridge-Mission, which the NDP won by 120, and Coquitlam-Burke Mountain, which went Liberal by a 170-vote margin. Elections B.C. waits until May 22 to tally absentee ballots in the final count, along with any recounts candidates request. (Judicial recounts could follow if a margin remains extremely close.) If the Liberals are confident they’ll wind up with 44 seats and the slimmest of majorities by month’s end, Clark has less motivation to bargain with the Greens.

Clark has more freedom to govern as she sees fit with a one-seat majority, but it wouldn’t be terribly comfortable. Somebody has to be legislature speaker, probably a Liberal. In Stephen Harper’s minority years as Prime Minister (2006-2011), Liberal MP Peter Milliken stayed on as Parliament’s chief referee, giving Harper more cushion on close votes; Johnston doubts Clark will be so lucky with a Green or NDP member. “The other side’s not going to cough up a speaker to her; that’s nuts,” he says. A Liberal speaker, likely Linda Reid, the current one, will face several tie votes. Convention holds the speaker must maintain the status quo—in some cases that could mean voting against government reforms, and in matters of confidence that would mean preventing the government from falling, Johnston says.

Clark will also have to give her MLAs regular vitamin B12 shots and strap them into their chairs so they don’t step down mid-term, risking a balance shift. The Clark government lost a seat last year to the NDP after one of her backbenchers resigned to run federally.

B.C.’s Lieutenant-Governor must grant the incumbent premier first crack at forming a government. In this case, Clark has strong moral foundation behind her claim to keep governing—she won a plurality of seats and the popular vote. Harper enjoyed this federally during his two minority terms last decade, and never felt the need to bring an opposition party formally onside. A leader who often thrived in brinkmanship, he continually found one opposition party or another to keep his government afloat. Recent minority premiers in Ontario and Quebec also muddled along this way for a couple years.

“If I were the Liberals I would give it a try, meet the house, maybe make some cosmetic gestures in directions of the Greens, dare them to bring us down,” Johnston says. What follows would be months of threats, games, tension and back-and-forth warnings about how British Columbians don’t want another election so soon after the last one—but the Clark Liberals would largely be able to pursue at least parts of their agenda without having to make the sort of deep compromises a formal pact may entail.

With the caveat that politics and hunger for power make strange bedfellows, Johnston sees this as an improbable scenario. Weaver and Clark have worked together at times over his last few years in legislature, but only to a point. “What I don’t think (Liberals) want to do is so severely compromise the brand as the sole credible alternative in the centre and right that they would make a deal that puts that brand as risk,” Johnston says. The Liberals brand themselves as the party of resource development, while Weaver’s party has vowed to oppose the Trans Mountain bitumen pipeline expansion and the Site C hydro dam. Clark could be willing to accept Weaver’s demanded end to corporate and union donations–and in so doing erase much of the stench around her party—and could allow an electoral reform commission and referendum, as her predecessor Gordon Campbell did in 2005 and 2009. Weaver may demand more than that.

There is a B.C. precedent: after 1941’s election gave no party a majority, the front-running Liberals formed a coalition with the third-place Conservatives party to block the left-wing CCF, and the Liberal-Conservatives won two additional terms.

NDP minority without a coalition:

When the B.C. legislature reconvenes, Horgan and Weaver could swiftly bring down a Clark government in a non-confidence vote, and Horgan would get a shot at forming a government. Some sort of formal agreement would likely be part of this, but rather than a coalition the two parties could strike a supply and confidence pact, Johnston says. The Greens would agree to support a Horgan government on the throne speech and budgets and other confidence votes, probably for a limited term like two years. This would let Weaver feel free to oppose the NDP on votes that wouldn’t fell a Premier Horgan.

While Weaver was prone to trash-talk Horgan as a hot-head during the campaign, their parties have much to agree on, such as eliminating business and labour cheque-cutting to parties and opposing energy projects.

In 1985 Ontario, a deal between the Liberals and New Democrats overtook the party with the most seats, the Tories. This was an accord, not a coalition, as no NDP members sat in cabinet. It lasted two years before the 1987 election, which handed the Liberals a majority.

There was almost a federal coalition in 2008, proposed by Liberal leader Stephane Dion and NDP’s Jack Layton shortly after that fall’s election, when they grew weary of Harper’s minority rule and his out-of-nowhere plan to end per-vote party subsidies. Dion was to become prime minister and six New Democrats were to join his cabinet. Harper thwarted the plan by proroguing Parliament, and the plan fizzled shortly thereafter.

If Weaver wants to be in cabinet, he’d likely feel more ideologically comfortable in a New Democrat cabinet. But he has favoured free votes for Green MLAs, and facing a government whip could pose a problem, Johnston notes.

Any NDP-led bid to oust Clark as premier would also give her the same potent moral argument Harper made when parties with less seats than him plotted to overthrow him, Johnston says. “Christy Clark will be in front of the media the next day saying ‘They have hijacked B.C. democracy.’” For Harper, this worked. The NDP-Liberal coalition, with support from the Bloc Quebecois, was unpopular even before the Conservative Prime Minister closed down Parliament. An NDP-Green coalition would also have 44 seats, facing the same speaker conundrum as a Liberal majority would, Johnston notes.

Nobody forms a government, and B.C. votes again:

The B.C. legislature’s next sitting date is Oct. 2 (unless it’s moved up), which gives the three parties nearly five months if they can sort out a stable–or shaky yet credible–plan to govern. If Clark can’t get the legislature’s confidence, she falls and the Lieutenant-Governor gives Horgan a shot. If he can’t either, as the Greens refuse to cut deals, the Queen’s representative would likely be advised to dissolve the legislature and a new election would be called.

In this improbable but technically possible scenario, voters would likely be spitting mad about an election in the same calendar year as the last one, and all parties would try to pin blame on the other. Greens would likely be the goat, not the best look for a party that has never come closer to the power levers than now, with three MLAs. Parties would prefer time to replenish their war chests as well (and catch their breath) before the next battle, making this even more unlikely to unfold.

But a precarious government may not last long. B.C.’s last minority government, elected in 1952 and led by W.A.C. Bennett of the Social Credit, fell in early 1953. Bennett then won six straight majorities and remained premier until 1972.