For some, skating on a synthetic surface is as bad as buying a fake Christmas tree. 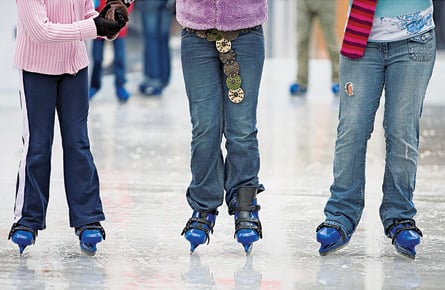 For some, skating on a synthetic surface is as bad as buying a fake Christmas tree. But running an arena is a costly enterprise, and so with a budget crunch putting several city-run rinks at risk—including eight in his ward—Winnipeg city councillor Gord Steeves wants the city to consider installing the more affordable fake stuff. A report on the benefits and drawbacks of synthetic ice, commissioned earlier this month by the protection and community services committee that Steeves chairs, is due in 90 days.

There is, not surprisingly, a bit of skepticism over making the switch. Thomas Steen, Steeves’s colleague on council and a former Winnipeg Jets forward, has skated on the surface and recently told local reporters that “it’s harder to turn or stop” on it, but he’s not opposed to the idea if the technology has improved. Georges Laraque, a former right-winger with the Montreal Canadiens and Canada’s representative for Super-Glide ice, argues that synthetic ice is “80 per cent like a real ice surface.” Laraque partnered with the Florida-based company following his retirement in 2009, when he noticed that maintenance costs were forcing some municipal arenas in Edmonton to close, leaving nowhere for kids to play hockey. Laraque, the deputy leader of the federal Green party, says that synthetic ice is a “green technology” and a cost-effective way to keep rinks open year-round. Plus, at $20 a square foot, he says, Super-Glide’s synthetic ice, made with a plastic polymer, is a cheaper alternative to the labour-intensive real thing.

For Steeves, it’s less about choosing fake over real ice, and more “a choice between synthetic ice and closing down these arenas.”