Blunt talk: Sniffing out the divisive smell of weed in Toronto

Sidarta Medina’s nose explores Toronto’s Christie Pits Park. It inhales a hint of vanilla soft serve, a trace of chlorine, and a waft of a clammy jogger. The nostrils flutter at the scent of a mango smoothie, a California roll with soy sauce, and green peppers on a warm slice of pizza. A twister of tobacco fumes enter his nose, but he’s searching for a different drug, for the earthy, bitter funk of marijuana.

With more than 100 pot dispensaries in the Greater Toronto Area, the city recently overtook Vancouver as the cannabis capital of Canada. While tobacco sales have plummeted since the 1990s, giving non-smokers years of nasal liberty, Ottawa’s promise to legalize marijuana means public smoke is back, and in communities across Canada parents and other residents complain about the stench of grow-ops or the smell of pot in the streets. To test the prevalence and pungency of the odour in public hubs downtown, Maclean’s enlisted Medina, an odour measurement expert.

The starting site, Christie Pits, is a greenspace in a traditionally NDP riding, where little leagues trot across baseball diamonds and couples lie braided together in the grass. On a Friday evening in July, the park is peppered with picnickers wearing tank tops, kids wearing bathing suits, and Medina, wearing a $6,000 olfactometry apparatus—a backpack strapped with a pylon-orange canister and a hissing scuba tank, feeding a respirator mask through tubes. “They are going to think we are the Ghostbusters,” he says.

MORE: It’s not legal yet. Inside Canada’s out-of-control marijuana business

Neither the pavilion nor playground emits whiffs of weed. Gravel paths, basketball courts, slacklining spot: all clear. Medina roams, mask off, until he finds a tree line. On the adjacent sidewalk, he halts. His nostrils flare. Plumes of smoke descend. Thirty metres upwind, a man and woman lean on tree trunks, passing a cigarette that is not tobacco.

Medina recalibrates his nose by breathing clean oxygen through his mask. The apparatus mixes the oxygen with a minuscule amount of outside air, in increasing intervals. Very little is needed before Medina detects terpenes, the odourous molecules in cannabis. Startled by what appears on his tablet, he redoes the test, only to confirm that, at 5:38 pm, the ambient smell measures 5,000 odour units per cubic meter, meaning it’s 5,000 times stronger than required for an average human nose to detect.

“I never imagined it,” he says. Working for a company called Scentroid, he regularly monitors odours at landfills, meat factories and sewage treatment plants. However Medina, who doesn’t smoke himself, has never before measured marijuana. “When we grab the sample from the wastewater treatment plant, it’s almost the same concentration,” he says. The potency is not dramatically lower than that of a rendering plant he tested, where slaughterhouse by-products get churned into grease, along with bone and meat meal. The fumes directly above the grease measured 6,500 odour units. The odour of an espresso machine, by contrast, measures 400 odour units while brewing, when tested one metre away, and Febreze (island fresh scent) scores 2,100 odour units when tested inside a ventilated washroom.

One odour unit, technically called a European Odor Unit, represents the intensity of stench for an average human nose to detect it, but not necessarily identify it. Conceptualized in 1999 by experts from 10 European countries, it’s now in standard use in most Western countries to track air quality and craft smells for the food and flavour industry. While criticized by some for being too subjective, it’s nevertheless accepted as the best system available for quantifying odour.

In Christie Pits, mother Shawna Agustin strolls by with her six-month-old daughter. “Every time we pass by here, we smell it,” she says. “I don’t want [her] to smell it.” Although children don’t remember other experiences until about age three, they can recall smells from the first two days of life. When traversing the smoke, Agustin walks faster.

Shaking maracas to Cuban rumba, two other park-goers report smelling weed weekly. “I don’t see anything wrong with it,” says a man who claims his name is “Tony Montana,” between puffs of a cigarette. “Some people really hate the smell of cigarettes, and the government sells cigarettes . . . How about the smell of cars, the gasoline?” Jose Lopez, 42, dissents: “The mothers smell it. How do they explain to their kids?” In the winter, Lopez complains that the odour follows him to libraries. “Human beings,” he says, “we need to smell the flowers.” 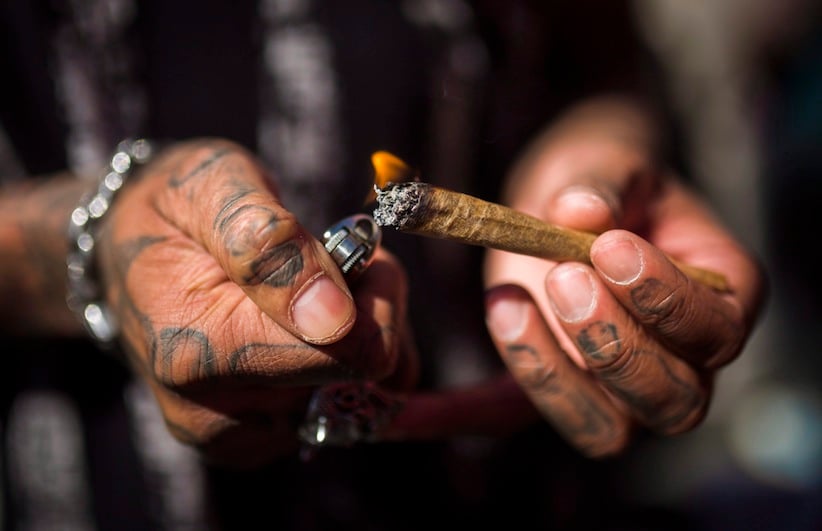 A man lights a marijuana joint during the “420 Toronto” rally in Toronto, Wednesday April 20, 2016. THE CANADIAN PRESS/Mark Blinch

Weed has become Toronto’s most potent and controversial smell. While European and American cities have odour bylaws—and some, odour hotlines—Torontonians who dislike the rank smell from any type of smoker on the sidewalk must simply hold their breath. “There’s nobody they can complain to because there’s nobody who deals with that issue,” says Mark Sraga, director of investigative services for the City of Toronto. The provincial government plans to amend the Smoke-Free Ontario Act to “crack down on public marijuana smoking,” but it hasn’t given a timeline.

Ontario is home to 18 of Canada’s 31 licensed medical marijuana operations. In Markham last year, parents reported that their elementary schoolchildren smelled like pot after a resident started a grow-op in his house across the street. The city shut down the operation based on a zoning violation (to which dispensaries are liable) that ensures if an establishment “does produce offensive or obnoxious odours,” as Sraga says “it’s separate from other sensitive land uses, such as residences, daycares, schools.”

It’s not that encountering marijuana smoke is dangerous. People left in an unventilated room full of smoke for an hour feel only mild intoxication, according to research from Johns Hopkins University. Turn a fan on, and they don’t get intoxicated at all (although they do get hungry). Second-hand tobacco smoke, by contrast, leads to premature death by heart disease of about 2,000 Canadians each year, and by lung disease for another 350, according to Health Canada reports in the mid-’90s.

Each odour has a detection threshold, which determines how easy it is to smell. Cinnamon, roasted coffee, cap guns and phonebooks have low detection thresholds, while lettuce has a higher threshold and is harder to detect. Marijuana has a much lower detection threshold than tobacco, so it smells harsher and travels further. Medina explains, “It makes your olfactory nerves excited.”

Or repulsed. Cannabis plants evolved to smell repugnant to mammals and other predators, and attractive to insects that help the plants reproduce. Complaints are therefore justified. However, each odour has a subjective pleasantness, called a hedonic tone, so a mammal that associates weed with music festivals or patio parties might instead smell it with the fondness as would a praying mantis. As a 23-year-old man in Trinity Bellwoods explains, “You’re walking down the street. You smell a hotdog stand. You smell some weed . . . It’s just part of summer.” 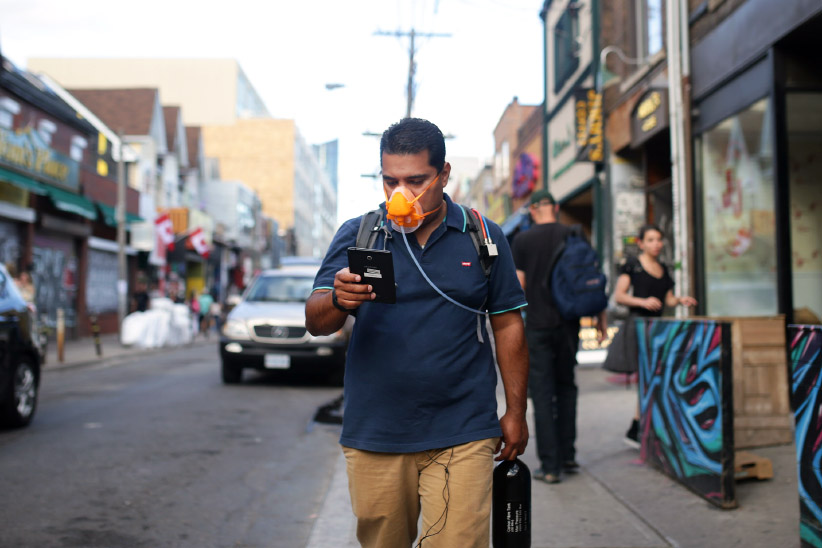 Raw fish, Jamaican meat patties, waffle cones, woodfire bagels—this is the olfactory cornucopia of Kensington Market. At Medina’s next stop, he tests a fish stall, donning his mask as flavours swim up his nose. (In this neighbourhood, bystanders assume his equipment is designed for spray painting.) The slimy fillets, in 28° C air, emit 2,000 odour units. Indeed, he’s about to find out that no other smell outside comes close to the 5,000 odour units of pot smoke.

Not even a cannabis dispensary, Canna Clinic, which exhibits jars of dried drugs and hosts people vaporizing out front, compares. Standing 6.5 m from the store, Medina measures a cannabis score of 2,300 odour units, suggesting the vaporizers produce less scent than marijuana cigarettes, likely because they heat the drug at lower temperatures. Marijuana scent doesn’t cling to walls or the air like tobacco scent does because the molecules aren’t soluble in water vapour. However, cannabis odour does linger on people’s skin and clothes because the molecules dissolve in oils.

Two doors down, a different dispensary hides its smell. Despite its array of flavours, featuring “shishkaberry,” “Blue God” and “Pink Kush,” Medina detects no odours. The place uses two carbon filters in the basement, along with odour-absorbing gels in the storefront, to appease the building’s landlord and 10 tenants. The gel kits are the size of mop buckets, full of shrivelled green gunk where marijuana molecules have dissolved. These “neutralizers” are also common in illegal grow-ops, along with “masquarants,” which are scented products like Febreze.

Still, an olfactory arms race is under way. As a street drug, marijuana has increased in potency. In 2013, the federal government warned that the content of THC (tetrahydrocannabinal, the intoxicant) had increased from three to 12 per cent since 1980 in some strands. As growers engineer plants with higher THC content, they have also increased the content of terpenes, strengthening the smell and taste. One 68-year-old man in Kensington Market, Michael Phoenix Green, laments, “Back in the 60s, it was a beautiful smell. Now it smells like a skunk with gastroenteritis.”

For all the complaints about Toronto’s weed odour, Medina finds no traces in some of the most likely pot spots—like Yonge–Dundas Square, the Times Square of Toronto, at 10 p.m. on a Friday night. Instead, the sniffing expert stays in his Ghostbuster gear (a bystander asks: “Are you guys from Statistics Canada?”) and lets his nose explore. Two metres from the open doors of a restaurant frying chicken he measures the smell at 2,300 odour units—less than half of what marijuana produced from 30 m away.

At a shisha café, in which customers smoke flavoured tobacco through vaporizer pipes, Medina conducts a final test in search of a smell as strong as the marijuana at Christie Pits Park, where residents jogged, kids played ball, and a mother and six-month-old strolled. Amid the lung-tingling haze of tobacco, which fogs the windows and carries tinges of strawberry mint and kiwi scents, Medina finds his match. The odour strength inside the shisha café measures exactly the same.