So long McLobster—why the infamous sandwich is gone

Even though the past few years have seen a surge in the supply of lobster, rising demand has driven up prices. Will that continue? 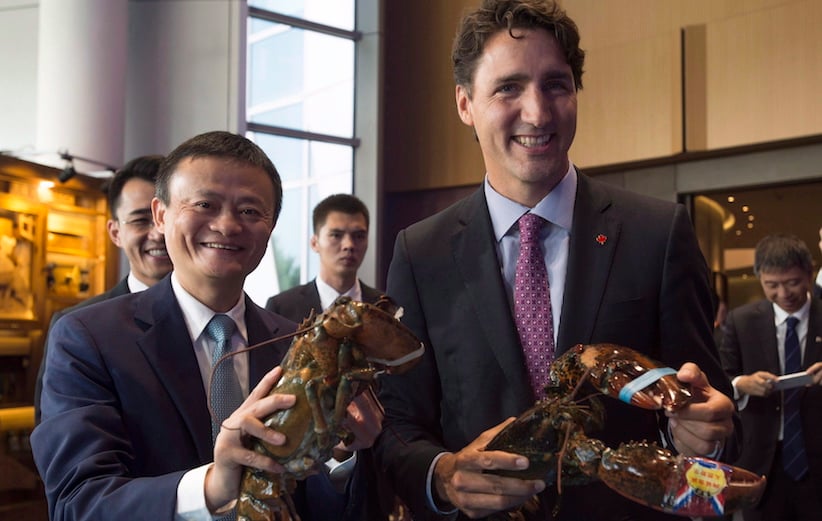 They were once called cockroaches of the sea, but in recent years, Canadian lobsters have been in high demand. And the price for the hard-shelled creature is hitting all-time highs. In fact, the price increase has been so steep that McDonald’s announced recently it won’t sell the McLobster sandwich in Canada’s Maritime provinces this summer. “Unfortunately, the increased price of lobster per pound means we are currently unable to offer this menu item at a reasonable price for our guests,” said Kirsten Hunter, a spokesperson with the company.

Here’s a look at the numbers behind the decision:

More lobsters to go around

The Maritime provinces—the former home of the McLobster—catch the majority of Canada’s lobster. Nova Scotia produces the highest amount of any province per year. In 2015, the province’s fisherman pulled 90,875 tonnes of lobster out of the water, according to Fisheries and Oceans Canada.

In the past five years, Canada’s total catch has increased by around 35 per cent.

There are a couple reasons for the general increase in lobster landings, according to Geoff Irvine, the executive director of The Lobster Council of Canada. Lobster main predators have decreased (namely cod and other groundfish), which means more lobsters grow big enough to catch. A warming ocean has made it easier for lobsters to survive. 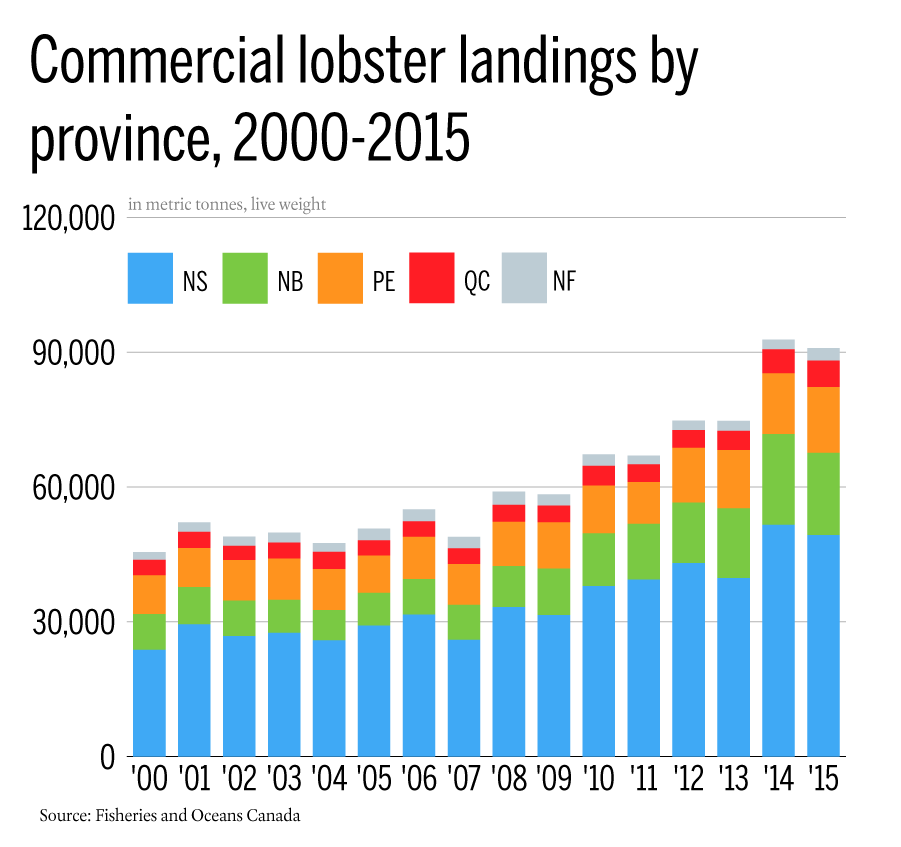 Of course, normally an increase in supply would put downward pressure on prices, as buyers don’t have to compete as hard to get their hands on lobsters. So far that hasn’t been the case.

Prices can jump around based on a variety of factors and the strength of the season, according to Irvine. This year, for instance, lobster landings have been hampered by difficult weather conditions, says Peter Hall, chief economist with Export Development Canada, which has contributed to higher prices. But in the past several years, harvesters and producers alike have seen a continuous increase in shore and market prices even as the supply rose. In fact, between 2010 and 2015, the yearly value of Canadian lobsters has more than doubled, compared to a 35 per cent increase in landings in the same time period. 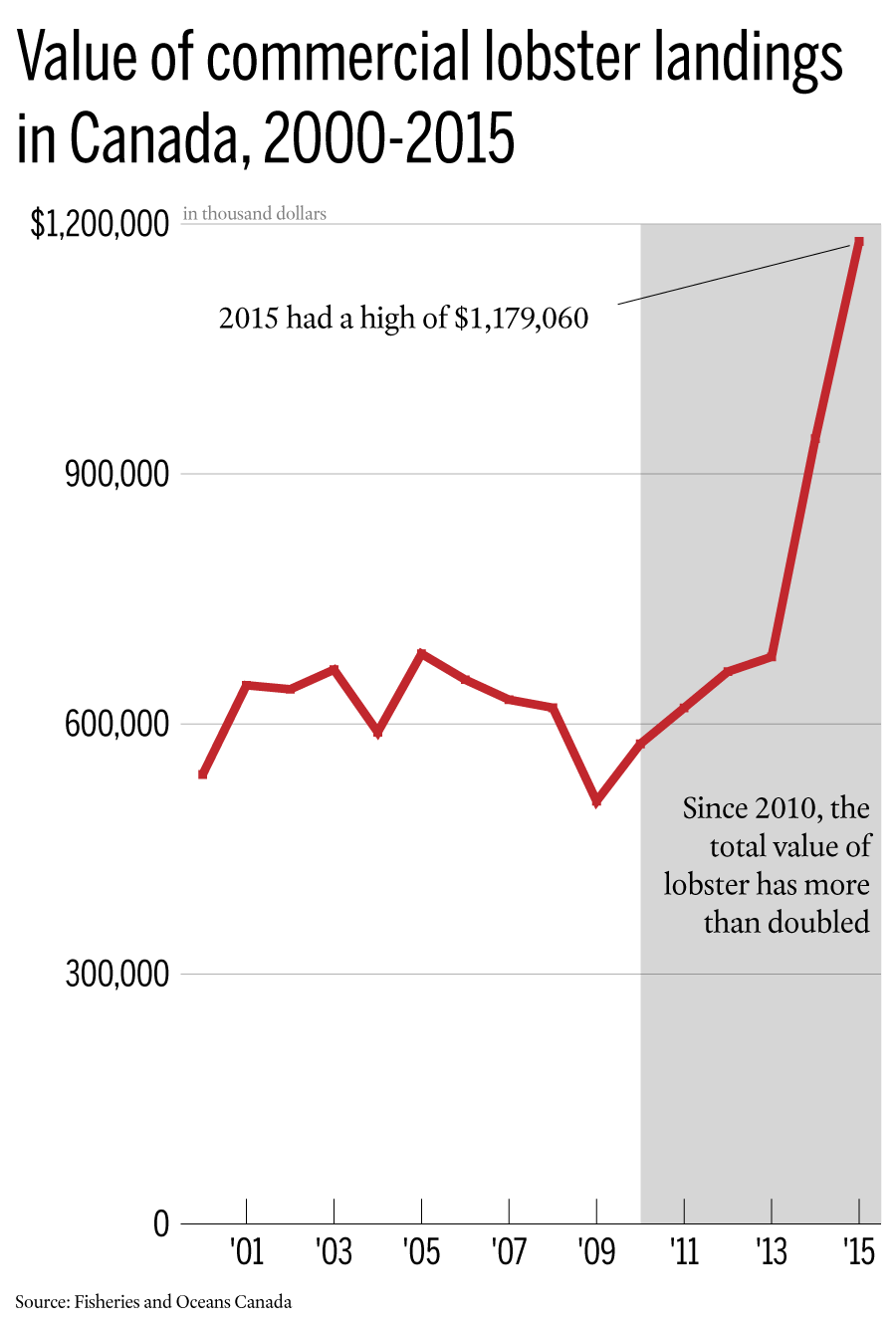 Despite the larger lobster catch, supply hasn’t kept pace with demand, and shrewd marketing is partly behind that rising demand.

After prices plummeted a few years ago, producers were left with a heft of lobster to sell, so they started marketing the product differently. That helped to change the way people used and ate lobster. Restaurants and food producers, accustomed to inexpensive lobster, started using them in new and creative ways. Lobster poutine is now ubiquitous. Lobster donuts are a thing. There are lobster flavoured chips, lobster burritos, and lobster mac and cheese, to name a few. One brewery in Maine is even making a lobster beer.

North American lobsters have also started to gain prominence in other countries.

Exports to Asian countries, most notably in China, have skyrocketed over the past several years. China is now the second-largest buyer of Canadian lobster (behind the United States). 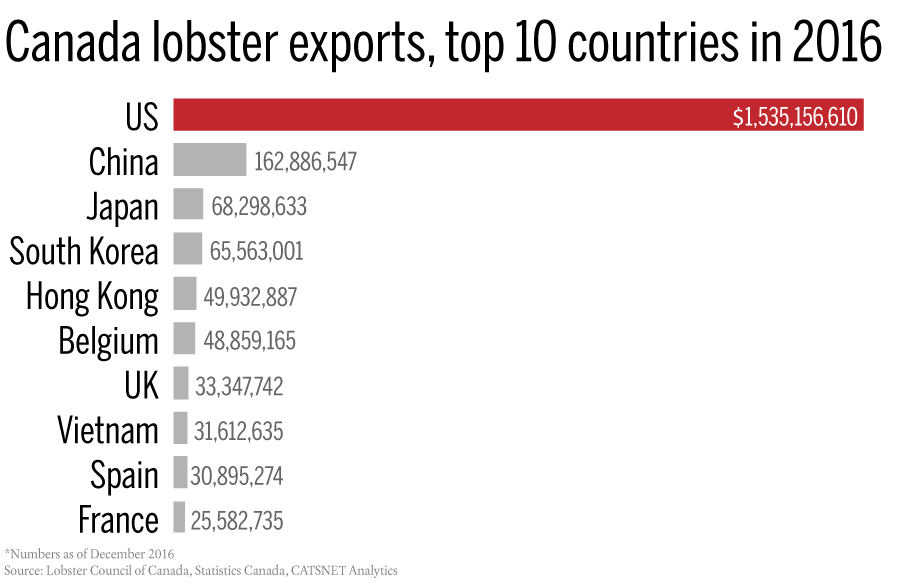 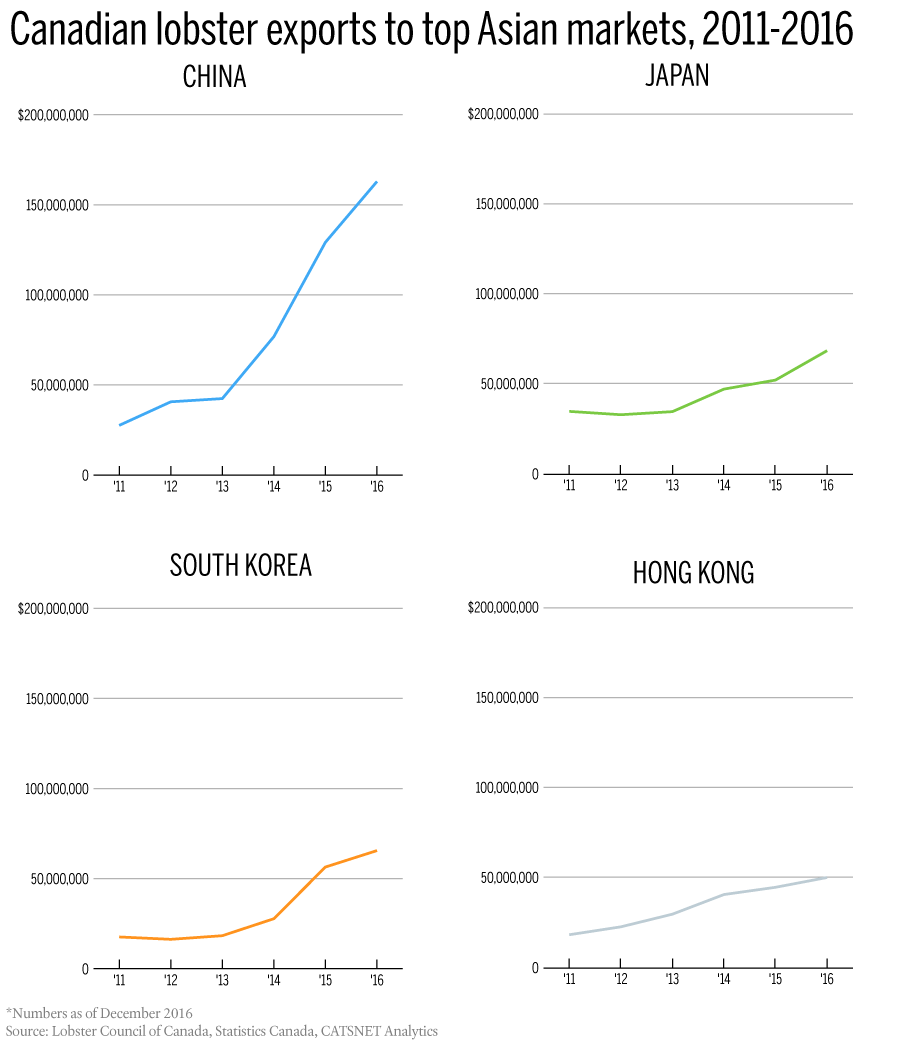 The weaker Canadian dollar has also given Canada a particular advantage, especially when it comes to the Chinese market, according to Simon Somogyi, an associate professor of agri-food value chain management at Dalhousie University.

“When it comes to the Canadian and the U.S., we’re competing very much on price,” he said, referencing the Chinese market. “The low Canadian dollar has helped a lot. If that increases, that’s going to be a problem.”

While the online lobster sales are relatively new, it has great potential for the Canadian lobster market, said Somogyi. The buyers tend to be young, highly educated professionals without children who live in China’s largest cities and are looking for snacks and imported foods.

The market is becoming so popular that Prime Minister Justin Trudeau held a Canadian lobster in a photo shoot with Alibaba chairman Jack Ma at the company’s headquarters in Hangzhou in September. The company, considered China’s Amazon equivalent, is now selling Canadian lobsters online.

China also reduced tariffs from 15 per cent to 10 per cent for live lobsters starting in 2017, which also supports more consumption in the country, according to Hall of EDC.

WATCH: What it feels like to go lobster fishing in P.E.I.

Halifax’s airport recently spent around $5 million to add a new cargo area to help speed up seafood exports from the province and accommodate the increase in demand.

Chinese seafood companies are also starting to take root on the east coast. In 2014, China-based Zoneco bought a lobster processing facility in rural Nova Scotia and, before a fire wiped out the facility in November 2016, it was shipping about 35,000 pounds of lobster to China a week.

However, there’s a lot of competition in the Chinese market now and the North American lobster demand might start to plateau, according to Somogyi. Plus, the Chinese economy isn’t growing as fast as before and a government crackdown on corruption means people have less discretionary income, he said.

The Comprehensive Economic and Trade Agreement would give Canada another advantage over the U.S. market and is already stoking fears in the Maine lobster industry. The agreement is set to eliminate tariffs on live and cooked lobsters from Canada to the European Union.