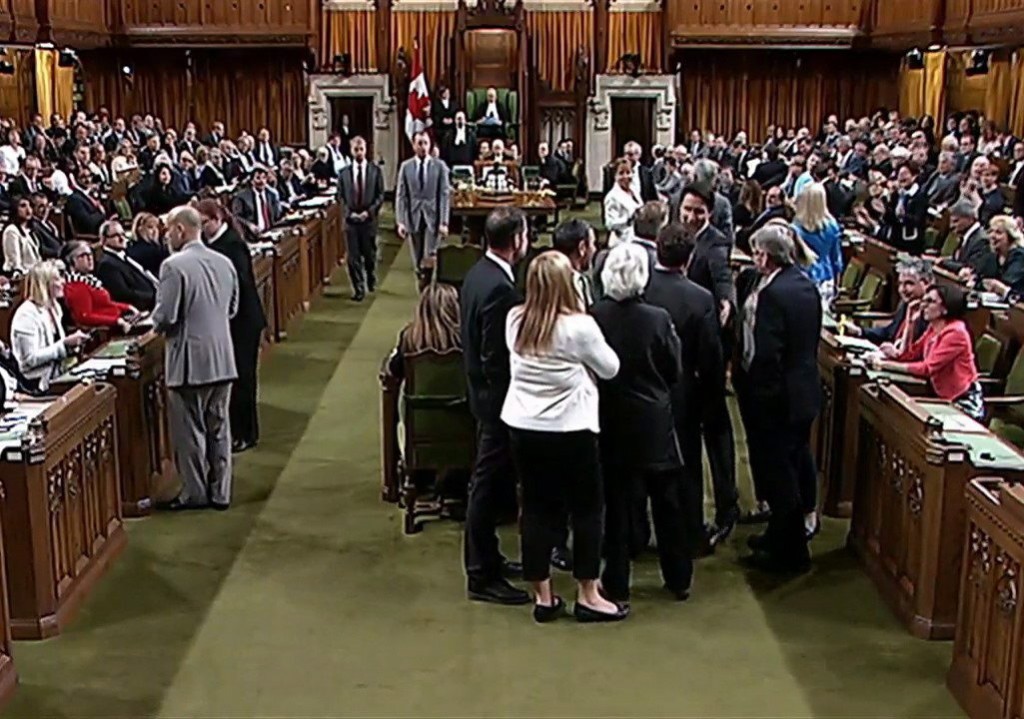 Canadian Prime Minister Justin Trudeau, face towards the camera left of centre of the frame, is shown near Opposition whip Gordon Brown in the House of Commons in Ottawa on Wednesday May 18, 2016. Footage from the Commons television feed shows Trudeau wading into a clutch of MPs, mostly New Democrats, and pulling Opposition whip Gordon Brown through the crowd in order to get a vote started. THE CANADIAN PRESS/HO-House of Commons

OTTAWA – Just some of what was said in the uproar that seized the House of Commons on Wednesday after Prime Minister Justin Trudeau elbowed NDP MP Ruth Ellen Brosseau in the chest during a brief scuffle with MPs.

“I was standing in the centre talking to some colleagues. I was elbowed in the chest by the prime minister and then I had to leave. It was very overwhelming and so I left the chamber to go and sit in the lobby. I missed the vote because of this.”
—Brosseau, MP for the Quebec riding of Berthier-Maskinonge

“I want to take the opportunity, now that the member is OK to return to the House right now, to be able to express directly to her my apologies for my behaviour and my actions, unreservedly.”
—Prime Minister Justin Trudeau

“I apologize for that unreservedly and I look for opportunities to make amends directly to the member and to any members who feel negatively impacted by this exchange and intervention because I take responsibility.”
–Trudeau

“I saw the prime minister – I would use the word ‘charge’ across the floor with intent and shove people, with the intent of moving the whip down the aisle, an intentional action by the prime minister which is unacceptable in the House of Commons. … As part of doing that he knocked one of my colleagues into the desk.”
–NDP MP Randall Garrison

“It was most unwise of the prime minister to attempt to move along the vote … but the second contact with my friend, the member for Berthier-Maskinonge, which is certainly the one that was the most emotional for the member involved, was clearly, from my perspective … unintentional.”
–Green party Leader Elizabeth May

“I have to say that I saw the prime minister approaching and following the honourable member, trying to reach her and saying how very sorry he was. He had not seen her behind him. That is the truth. Now you can like it or not like it.”
–May

“What I witnessed was the Prime Minister striding across and coming to the group that was gathered and blocking the way of the opposition House leader. As he strode across, the group moved apart and he reached through and moved the House leader through. At the point that he did, he did bump into another member. I believe there was no intent to harm anyone or to actually bump into any one.”
–Liberal MP Deb Schulte

“I am ashamed, as somebody who sits in this House, to have been witness to the person who holds the highest position in our country, the highest elected position, to have done such an act in this House.”
–NDP MP Niki Ashton