NCC pitches a new plan for victims of communism memorial

The NCC is revising the design of a controversial monument. John Geddes explains why it's unlikely to sway those who find the idea unthinkable 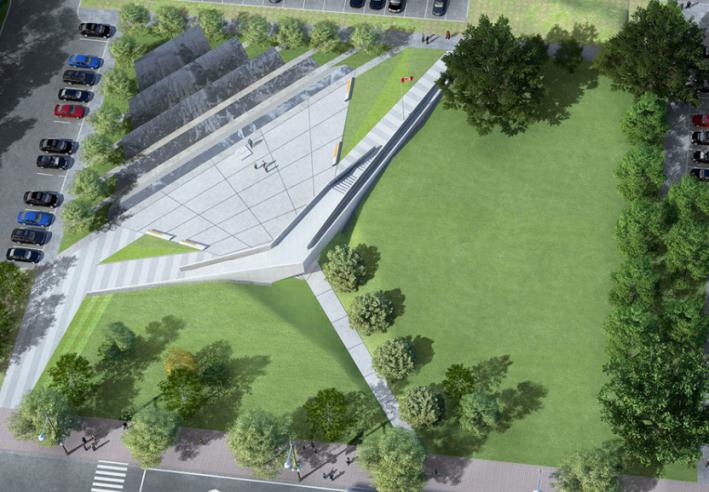 The revised plans to the concept of the Memorial to the Victims of Communism.

Outside of read-aloud storytime in the children’s book section of a good library, it’s rare to hear such a soothing tone of voice as Steve Willis‘s, the National Capital Commission’s executive director of capital planning, used today to present to the NCC’s board a revised design for the government’s proposed victims-of-communism memorial.

His presentation to the NCC’s open board meeting had been anxiously awaited by the memorial’s many opponents, who object to its massive scale and imposing design and, especially, to plunking the monument down on the site chosen for it by the Conservatives—a rare patch of vacant space near Parliament Hill, right next to the Supreme Court of Canada.

Willis took pains today to describe how the revised design would cover only 37 per cent of that prime piece of real estate, much reduced from the 60 per cent the original plan would have taken up. And he stressed that the scaled-down version wouldn’t be the aggressive concrete mass illustrated, to the alarm of so many, in previous design drawings.

Instead, Wills said, the more muted monument would “nest within the existing landscape burm”—a grassy rise on the site. Compared to the assertive original, the adapted monument will be “nestled much farther back” from Wellington Street. It will be “less dominant.” At night, Willis added, instead of the red lighting envisioned by its designers, they had agreed to substitute “much more gentle white lighting,” of a sort that “doesn’t detract from the architecture in the balance of the area.” And there will be lots of “grasses and ornamental shrubberies,” not to mention “native Canadian maples,” to break up the view.

I dare anyone to object in any way to the maples. As for the rest, it seems more sellable, at least, than the polarizing design it replaces. Still, opposition will not melt away. Timing is crucial. With the fall election coming up, there seems to be no way the Conservatives can complete enough work on the monument to make it all that difficult, should they lose the election, for a new government to halt the project.

In fact, the NCC board appeared pointedly interested in the notion of moving it. After all, the site originally designated for the thing was across Wellington Street and a bit west of the Supreme Court of Canada. Other possible locations have been proposed—none so prominent as the current site, but still within the ceremonial heart of the capital. 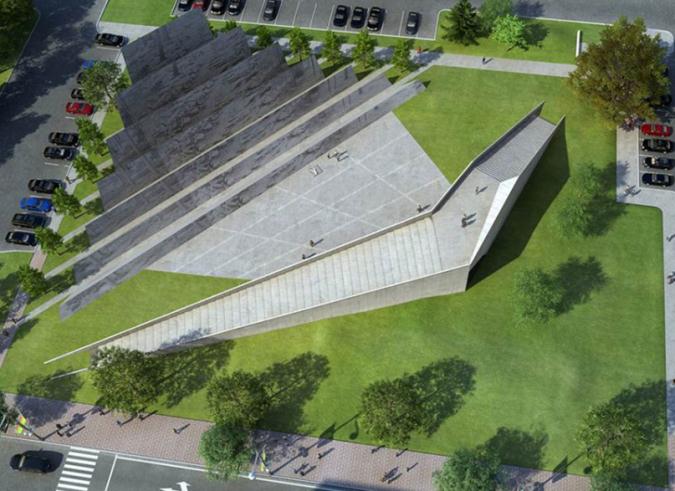 The initial plans for the monument.

It was worth listening when NCC board member Norman Hotson spoke up near the end of the discussion of the new plan. As an architect and a respected urban design expert, and a founding member of the Vancouver’s DIALOG design studio, Hotson is the board member whose voice you’d most want to hear regarding this controversy. “I’m very pleased to see the reduction in scale that has been so well delivered today,” he said. “I just wish it would go a step further.”

Well, perhaps more than just a step. He rejected the notion of the monument—apparently, no matter how gently nestled into the landscape, regardless of how softly lit by night, being built where the government wants to put it. “There must be a building built on this site someday,” Hotson said. “It is just such a part of the composition of Parliament Hill.”

As for the decision to put the monument there in the first place, Hotson said: “It feels a little bit like it’s been plopped into a convenient location where there happened to be a bunch of open land, and that’s not the way to plan something that’s both very important as a monument, but also in a way that preserves a site that should have a building on it someday.”

Further work to revise the monument’s design is under way. The NCC board is likely to convene a special meeting to consider it later this summer. But, no matter how reassuringly the revisions are described, nothing is likely to change the minds of the many designers and architects, such as Hotson, who find the proposal unworkable.