The countess, wife of the Prince Edward, will be accompanied by Gov. Gen. David Johnston

REGINA — The fire-damaged city of Fort McMurray in northern Alberta is getting a visit from Sophie, the Countess of Wessex, on Friday.

The countess, wife of the Queen’s youngest son, Prince Edward, is to be accompanied by Gov. Gen. David Johnston, who will present a commendation for outstanding service to those involved in emergency relief efforts.

The announcement out of Ottawa came as Edward and Sophie were visiting Manitoba and Saskatchewan on Wednesday.

They touched down in Regina in the afternoon, where Edward inspected troops from Moose Jaw’s Saskatchewan Dragoons.

Sophie received a bouquet of flowers from five-year-old Aida Weaver, who said afterwards that she wasn’t at all nervous to meet the royal couple “because it was fun.”

Edward then gave a humorous speech at a gala in Regina to mark the 50th anniversary of the Globe Theatre, of which he is the royal patron.

The Earl joked that previous speakers had already thanked so many people that he was left with little to say.

“To be honest there isn’t a single person I can think of thanking _ unless there’s a theatre cat, of course, I don’t know,” he said to laughs from a crowd that included Saskatchewan Premier Brad Wall, federal Public Safety Minister Ralph Goodale and Assembly of First Nations national Chief Perry Bellegarde.

Edward did go on to credit the directors, production teams, writers and volunteers at the theatre. 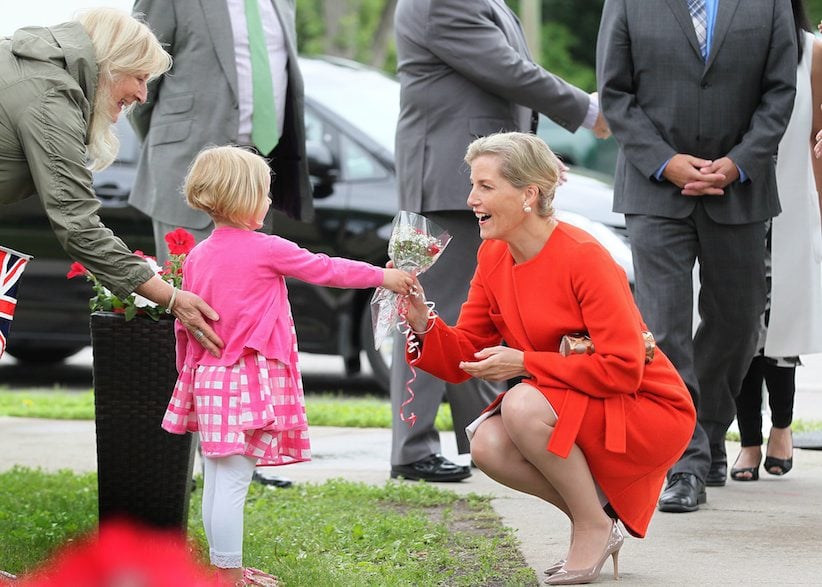 “It is extraordinary, but it would not happen without you. None of this magic would have been possible without you and so you’re all to give yourselves a very large pat on the back and say ‘Well done.’ ”

Earlier Wednesday, there were smiles, handshakes and even a couple of jokes as Edward and Sophie visited Winnipeg.

The Earl and Countess of Wessex toured an aviation museum and looked at vintage airplanes. They appeared to take particular interest in an experimental flying saucer, funded by the United States air force in the 1950s, that was discontinued due to stability problems.

The Queen’s youngest son later handed out certificates to dozens of recipients of the Duke of Edinburgh International Award, founded by and named after Edward’s father.

To receive the award, young adults participate in a leadership program that includes a wilderness portion called the Adventurous Journey.

Edward joked that when he took part in the program as a young man, he had second thoughts.

“I’m sure there were probably moments when you were doing it, you were wondering why you were doing it. And if it was anything like mine, it was probably halfway through the Adventurous Journey. However, it is a fantastic feeling when you get to the end.”

Edward also noted a survey that said 75 per cent of program participants gained an appreciation of the outdoors.

On Thursday, Edward is to receive a private tour of the RCMP training academy in Regina, while Sophie visits the RCMP Heritage Centre. The couple also plan to visit Government House in Regina and take part in a public walkabout.

Sophie will then head to Edmonton and Fort McMurray, while Edward has more private meetings in Regina before going to Calgary.

The governor general said in a news release that he and Sophie are looking forward to meeting first responders, volunteers and residents affected by the Fort McMurray fire.

Almost 90,000 people had to flee their homes when flames whipped by high winds raced through the city May 3.

“They all have shown tremendous courage and resilience throughout this devastating disaster,” the governor general said in the release.

“Our visit to Fort McMurray will allow us to show our ongoing support and to recognize so many great Canadians for their outstanding work.”

Five years ago, newlyweds Prince William and his wife, Kate, lifted spirits when they visited the town of Slave Lake, Alta., after another vicious blaze destroyed one-tenth of that community.