Sorry, have we met? 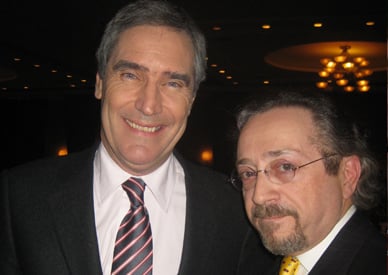 Last week’s Maclean’s story detailing strategist and organizer Beryl Wajsman’s return to the Liberal Party of Canada has erupted in Ottawa. Wajsman, whose name appeared on a list of ten prominent Liberals “banned” from the party following the sponsorship scandal in 2005, has since returned to the Liberal fold, primarily as an organizer for Michael Ignatieff advisor Alfred Apps.

Conservative Public Works Minister Christian Paradis brought up Wajsman’s return in the House of Commons yesterday, and followed up with a press release saying the Liberal Party “has clearly not learned its lesson from the Sponsorship Scandal.”

Paradis alleges that Wajsman was heavily involved in the scandal in 2005, even though Wajsman was never accused of any impropriety or crime. Yesterday, through his lawyer, he fired back at Paradis. “You made remarks alleging [Wajsman’s] involvement in the sponsorship scandal. This constitutes defamatory libel. We demand that you immediately apologize and retract these statements,” wrote Montreal lawyer Julius Grey. “There is no evidence that Beryl is anything but honest,” Grey told Maclean’s. “There is only so much a citizen can take of having mud thrown at him.”

Reached for comment, Wajsman said he is pursuing Paradis and the Conservative Party in order to right his reputation, something he says he didn’t do in 2005. “Maybe I should have gone after them back then,” he says, referring to former Prime Minister Paul Martin and Liberal Quebec lieutenant Jean Lapierre, who were responsible for banning him. (The ban never actually occurred, as it was illegal under the Liberal Party’s constitution at the time.) “But now, I’m going to finish this. It’s enough. I’m a leader, not fodder for people’s careers,” he says, of Christian Paradis.

Confronted with the news outside the House of Commons, Ignatieff downplayed Wajsman’s involvement with the Liberals. “Listen, there are people who think he wrote speeches for me. To my knowledge I haven’t had contact with Mr. Wajsman and I don’t read his speeches, that’s for sure.” However, as the picture above indicates, the two met at a Liberal function in December. The photo appeared in the print version of Wajsman’s newspaper, The Metropolitain, as well as on the website of the Institute for Public Affairs of Montreal, a think tank of which Wajsman is president.

Alfred Apps, who is also running for the President of the Liberal Party of Canada, says he isn’t surprised that Ignatieff couldn’t remember Wajsman immediatly. “There are dozens of people who have contributed to Michael’s policy development and speeches, and Beryl has been one of them. Has he been a speechwriter for Michael? No. Has he written speeches for Michael? No.”

Apps says Wajsman has played a consultative role behind certain Liberal policies–for which Apps makes no apologies. “I think there’s an effort here on the part of the Tories to slam people with guilt by association. Beryl is one of the militants that is helping with the party, and his help is welcomed.” The presumptive next Liberal President–he is currently running unopposed–suggests the so-called “banned list” on which Wajsman appeared was less about meted out justice than it was a vestige of the old, bitter feud between Paul Martin and Jean Chrétien. “That list was created before the Gomery Commission had made any of its findings,” Apps said.