Stop hating Sir John A. (and other history lessons)

Canada is suffering from a rampant myopic urge to erase the entirety of its history. Why it’s time to stop the attacks on our past. 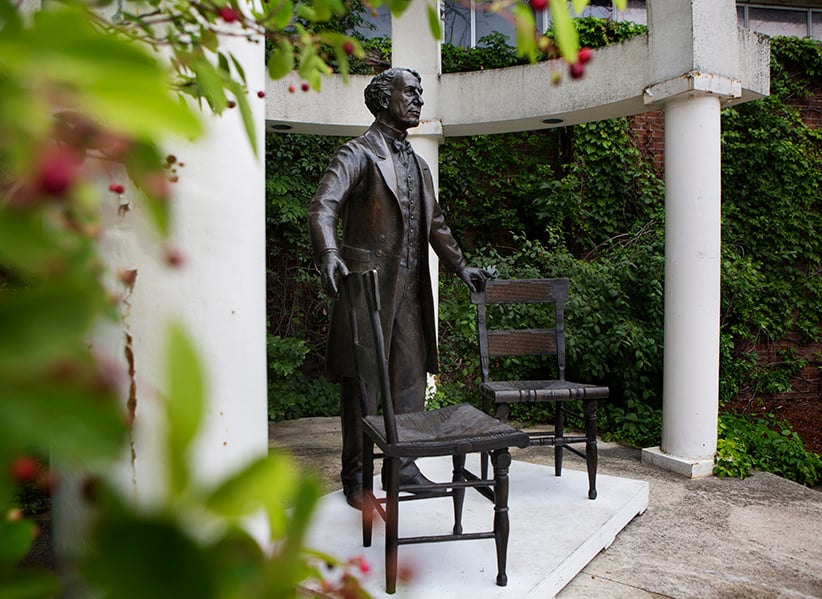 Sir John A. Macdonald is no longer homeless. And soon he won’t be lonely either.

A life-sized statue of Canada’s first prime minister that bounced around southwestern Ontario like an unloved hobo before finding a home in a little-known national historic site is about to get some company. As part of this year’s Canada Day 150 celebrations, two new bronze prime ministers will be added to a burgeoning statue park celebrating Canada’s political leaders in Baden, Ont.; another will follow on Remembrance Day.

The statue announcement offers a welcome opportunity to celebrate the stories of Canada’s political leaders. And a chance to push back against relentless demands that we turn our backs on our own history whenever it conflicts with delicate 21st century sensibilities.

The tale of how Sir John A. came to Baden is a depressing reminder of the hostility often directed at Canadian history. In 2013 a local group of benefactors offered to install statues commemorating all 22 of Canada’s past prime ministers in a large urban park in downtown Kitchener. While this unique tourist attraction was to be provided free to taxpayers, nearby residents were aghast at sharing their beloved green space with, as one complainant put it, the “corrupt white dead men” who’ve served as prime minister.

After a considerable public outcry, Kitchener promptly withdrew its support. When it came time to unveil the first, now-homeless statue of Macdonald, the only available locale was a hockey rink. He later spent time in a doorway on Kitchener’s main drag. Such neglect seems a shame since the statue, by sculptor Ruth Abernethy, is a clever and engaging piece of art; titled “A Canadian Conversation,” Sir John A stands at ground level offering viewers a seat at one of two empty chairs, signifying his role bringing English and French Canada together via Confederation.

The following year Wilfrid Laurier University in neighbouring Waterloo offered to host the statues, and the itinerate Sir John A. was promptly installed on campus. Almost as quickly came another backlash. Macdonald’s presence was “a visual embodiment of colonialism and an affront to Indigenous students,” claimed a petition popular with students and faculty. University administration commissioned a report that declared the statue plan an impediment to the school’s goals of “inclusivity and diversity.” Canada’s founding leader got the boot once more.

It wasn’t until last year that Macdonald finally found a permanent home in the bucolic community of Baden (population 5,000) on the grounds of Castle Kilbride, an elegant 19th century Italianate villa and national historic site. This week, what is now called the Prime Ministers Statue and Educational Resource Project, announced the imminent arrival of the three further statues. Their identities will be revealed the month prior to Canada Day, but project co-ordinator Jim Rodger hints they’ll be among the legends of Canadian politics. (In other words, don’t hold your breath for a Kim Campbell or Sir John Abbott.)

Rodger, a retired local high school principal, says the long and often difficult journey to Baden was “a surprise and a disappointment” for the group and its funders. “We certainly didn’t expect such push-back against the idea.” He points out each $90,000 statue will come with a sizeable educational component meant to foster debate and fill in the historical record. “It has never been our intention to put these figures up on pedestals, either stylistically or symbolically,” he adds. “No one is saying they were saints, we want people to talk about them, their accomplishments and deficiencies, and the context of their time.”

Such an effort at historical accuracy and contextual understanding seems a welcome counterpoint to the rampant myopic urge to erase the entirety of Canada’s history. Demands that historical figures be judged by the standards of the present – as evidenced by the repeated animosity shown the statue plan − threaten to denude our country of its entire past.

Canada has certainly committed its share of mistakes over its 150 years. But where we’ve erred, we’ve apologized. And the trajectory has been unquestionably upwards. Canadian history should be considered a process, and the result today is a country that stands as a model for the rest of the world in terms of tolerance and diversity.

Simply declaring all historical figures unfit for 21st century consumption ignores the crucial role they all played in that chain of events that yielded modern Canada. Rather than holding them to the impossible (and ever-changing) standards of today, the only fair way to consider the historical contribution of our past leaders is to weigh their most significant accomplishments in the context of their own times. “I don’t think you could ever find someone from the past who will measure up to today’s standards,” says Rodger, speaking from experience.

It’s something to keep in mind given the latest urge to rid ourselves of our past: renaming the famous Langevin Block in Ottawa.

A sturdy sandstone edifice across the street from the Parliament Building and home to the Prime Minister’s Office, the 128-year old landmark is named for Sir Hector-Louis Langevin, a long-time Quebec member of Macdonald’s cabinets and a central figure in Confederation. He was also the creator of Canada’s now-reviled residential school system.

Last month Indigenous leaders, including several MPs as well as Assembly of First Nations National Chief Perry Bellegarde demanded the Trudeau government remove Langevin’s name from the building. “One … [of] the key architects of the devastating Indian residential school system include prominent leaders of the past such as Hector Langevin,” Bellegarde said in a letter to Public Services Minister Judy Foote, making the case for Langevin’s removal.

As for incriminating evidence, the Truth and Reconciliation Commission’s final report gives prominence to Langevin’s role in the attempted assimilation of native culture. “If you wish to educate the [native] children, you must separate them from their parents,” he told the House of Commons in 1883. “If you leave them in the family they may know how to read and write but they still remain savages.” Is this sufficient to strike Langevin from Ottawa’s sandstone pantheon?

While Langevin attracts the ire of Indigenous leaders for his creation of the residential school system, it’s wrong to consider this his principal legacy. Langevin was honoured with his name on a building because he was a key member of Macdonald’s government and an accomplished minister of public works during Canada’s early years. The authoritative entry on Langevin in the Dictionary of Canadian Biography dwells at length on his role as a federalist figure in fractious pre- and post-Confederation Quebec. It never once mentions residential schools.

As for context, Langevin’s views on assimilation and ‘savages’ may grate on today’s ears, but his belief in the superiority of white culture simply reflects the wisdom of the day. If he stood out, it was for being overly generous towards the native community. In response to Langevin’s residential school plan, federal Liberal leader Edward Blake, for example, argued the planned federal expenditure of $150 per child was “extraordinarily large,” and proposed instead that the “squaws … [and] bucks” be housed in “the simplest manner.”

Langevin also planned to give every native residential school graduate a free homestead. This was not a plan created out of open hostility towards natives; the goal, however misconstrued or poorly implemented, was to improve their lives. Surely intent matters.

Like the rest of Canada’s leaders, Langevin was no saint. He was implicated in the Pacific Scandal and suffered several other political humiliations. But he was an important voice for federalism in Canada’s early life. He offered many years of service to this country. And, for his time, he demonstrated an enlightened regard for native living standards. As such, he deserves his place in Ottawa, just as our prime ministers, flawed as they may be, have earned their spot in Baden.

History is the record of what happened. It’s not what we wish should have happened.