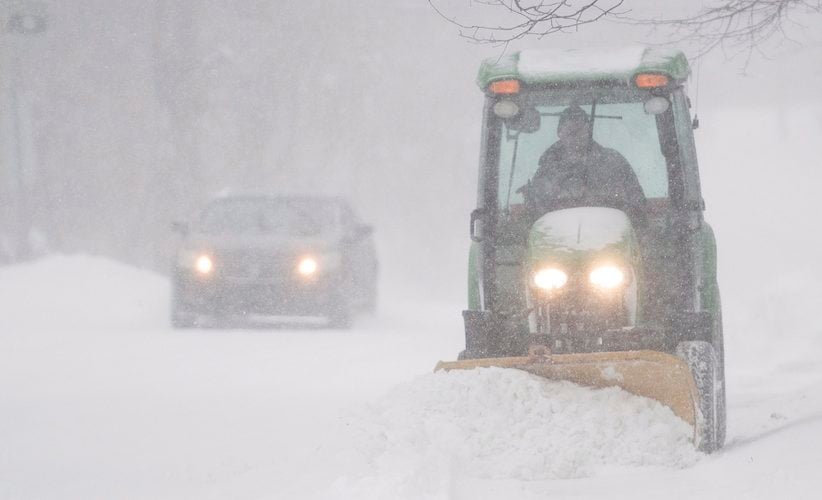 A snow plow clears a street in the town of Hudson, west of Montreal, Tuesday, December 29, 2015 during the first major storm of winter. (Graham Hughes, The Canadian Press)

TORONTO — A powerful storm system which dealt southern Ontario its first real blast of winter this season moved into southern Quebec on Tuesday, with meteorologists expecting it to hit Atlantic Canada later in the day.

The system moved into Canada from the U.S., where it had spawned deadly tornadoes in Texas over the weekend, and brought heavy snow, ice and blustery winds Monday to several other states, causing the cancellation of more than 2,800 flights nationwide.

“This particular messy mix of precipitation, the snow, ice pellets, freezing rain, rain, really is the first taste of winter for a lot of southern Ontario,” said Geoff Coulson, a warning preparedness meteorologist with Environment Canada. “This is a large scale system.”

Snow gave way to rain in many areas, including the Toronto region, by Tuesday morning.

The conditions made for a slow commute as motorists dealt with slick roads and slushy sidewalks. Ontario Provincial Police said they had responded to more than 300 collisions since the storm began.

While southwestern Ontario was expected to see periods of rain for the rest of the day, freezing rain warning remained in effect for areas north and northeast of Toronto.

Meanwhile, in eastern and central Ontario, including the Ottawa valley, North Bay and the Sudbury areas, colder temperatures meant heavy snow was in the forecast, said Coulson.

The storm system was also making its way into southern Quebec, where a number of winter storm warnings were in effect.

“They anticipate this to be mostly a snowfall event, where some areas of southern Quebec could see between 30 to 40 centimetres before the system finally weakens off and pulls out overnight,” said Coulson. “A similar situation in the Maritimes, this system will also affect them during the course of the day.”

A snowfall warning was in effect for Halifax, while a winter storm watch was in place for Fredericton.

The storm system has lead to numerous flight cancellations and delays.