Cromwell, 63, was named to the Supreme Court in 2008, after serving 11 years on the Nova Scotia Court of Appeal 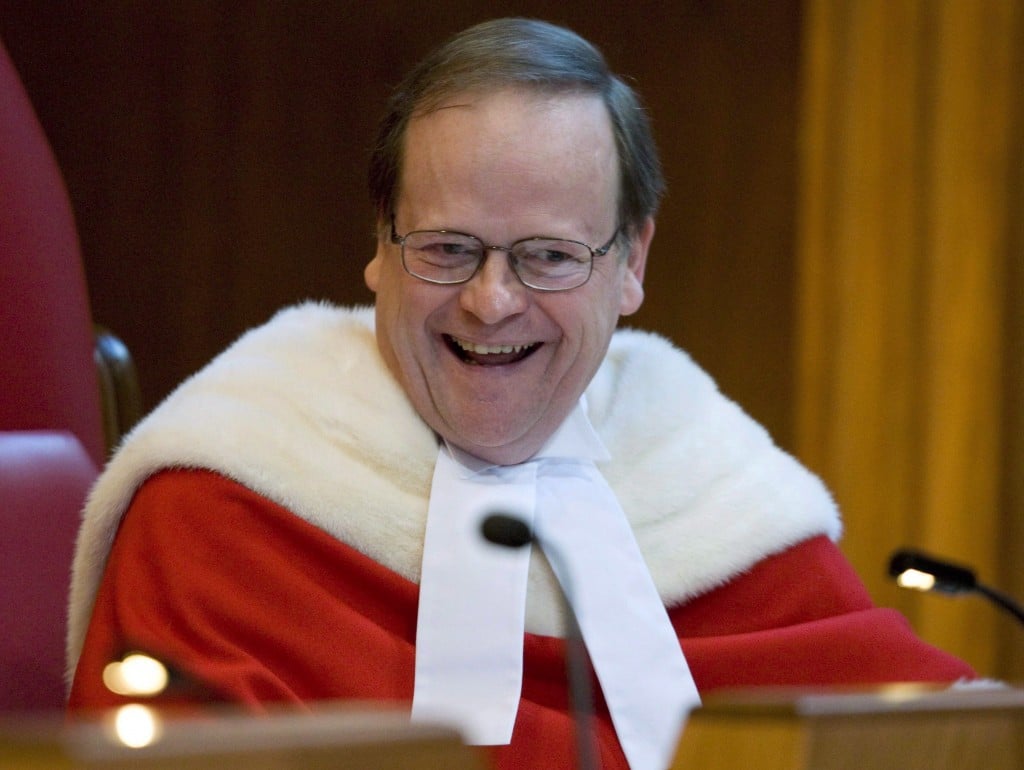 Justice Thomas Cromwell laughs as he listens to speakers during a ceremony officially welcoming him to the Supreme Court of Canada in Ottawa, Monday, Feb. 16, 2009. Cromwell is retiring Sept. 1, setting the stage for Prime Minister Justin Trudeau’s first appointment to the high court. THE CANADIAN PRESS/Adrian Wyld

Cromwell, 63, was named to the Supreme Court in 2008, after serving 11 years on the Nova Scotia Court of Appeal.

“Outside the court, Justice Cromwell’s tireless efforts to increase access to justice will continue to benefit Canadians long after his retirement from the bench,” McLachlin said. “We will miss him greatly.”

Cromwell, born in Kingston, Ont., said that as his time as a judge draws to a close, he believes more firmly than ever that an independent and effective judiciary is a cornerstone of democracy.

“Being a judge is both a great privilege and an onerous responsibility,” he said. “I will always be grateful for the opportunity that I have been given to serve Canada in this capacity.”

Before joining the Nova Scotia appeal court, Cromwell worked from 1992 to 1995 as executive legal officer to then-Supreme Court chief justice Antonio Lamer. His duties included briefing the media on the intricacies of rulings.

Cromwell could be involved with the Supreme Court until early next year. Under the rules, a departing judge may – for up to six months after retiring – take part in judgments on cases that they have heard.

“My impression has been that Justice Cromwell very much enjoyed his work at the Supreme Court, and that is why I am somewhat surprised at this announcement,” said Prof. Philip Girard of York University’s Osgoode Hall Law School, who once taught alongside Cromwell at Dalhousie University in Halifax.

“He was known as a centrist, but that label probably stuck for want of a better one. He was actually difficult to pigeonhole on any left-right, activist-deference kind of spectrum,” Girard said.

“The theme that comes through most strongly in his judgments is an unwavering loyalty to the law itself, and to its impartial interpretation and application, always done with a strong dose of common sense.”

The reasoning in his decision while on the Nova Scotia Court of Appeal in the Marshall / Bernard case, which involved aboriginals cutting timber on Crown land, was overturned by the Supreme Court of Canada, Girard noted. However, 10 years later, it was applied by the Supreme Court – of which he was now a member – in the British Columbia Tsilhqot’in case, as the court made the first declaration of aboriginal title in favour of an indigenous group.

“It will probably be seen in the future as one of his most significant contributions to Canadian law,” Girard said.

The court will begin to look different under Trudeau, said Prof. Jamie Cameron, who also teaches at Osgoode Hall.

“I just think that this is a prime minister who is more mindful of diversity considerations,” Cameron said. “One of the more interesting questions will actually be what this government is going to do with the appointment process.”

During the election campaign, the Liberals criticized Harper for disrespecting and degrading the process, and promised to work with the House of Commons to ensure appointing Supreme Court justices is “transparent, inclusive, and accountable to Canadians.”

The Liberals said the process would involve proper consultation with authorities throughout the legal profession, including the provinces, provincial law societies, provincial appellate and superior courts, and the chief justice.

The party also said all appointees to the high court would be functionally bilingual.