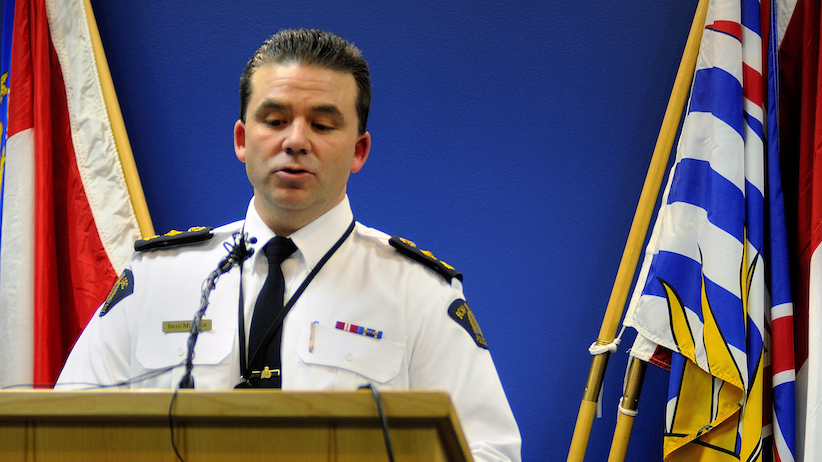 RCMP Superintendent Brad Mueller speaks during a news conference in Kamloops, B.C. Wednesday December 3, 2014. A 36-year-old man has been arrested in the shooting of a Mountie who stopped a vehicle this morning. (Dave Eagles/Kamloops This Week/CP)

VICTORIA – A 36-year-old man who is known to police has been arrested by members of an emergency-response team in Kamloops, B.C., just hours after an RCMP officer was shot and critically wounded.

RCMP Supt. Brad Mueller said Wednesday that police helicopters and dogs were also involved in the search for the suspect who allegedly shot Cpl. Jean Michaud earlier in the day in the city located in the province’s Interior.

Michaud, who is a member with 13 years’ experience and the father of two young children, remains in critical but stable condition, he said.

“The events are, you know, a sobering reminder of the dangers that police officers face every day while they are serving and protecting their respective communities, and I can’t tell you the impact that an incident (like this) has on our policing community,” Mueller said.

He couldn’t reveal the name of the suspect who has not yet been charged.

The police watchdog confirmed in a statement emailed early in the evening that it will be investigating because it has “confirmation of a serious injury to the affected person.”

Hours earlier, at about 2:45 a.m., the officer had pulled over a vehicle in a residential area of the city. He was shot by a suspect who was inside a white, four-door Chrysler Intrepid while another officer who had come as a backup for Michaud exchanged gunfire.

Police launched an intensive search, blocked off the area and evacuated some residents for what they said were public safety reasons. The shooting also prompted false media alerts that arrests had been made.

“The doctors were very happy with how he responded with the surgery,” he said.

Mueller said Michaud was wearing a bullet-proof vest and driving a marked police cruiser as he approached a vehicle as part of an ongoing investigation.

“I can say that our officer was fired upon as he approached the suspect vehicle and the backup officer who was also in attendance returned fire towards that vehicle,” he said.

Dennis Maruschy, who lives a block and a half from the shooting scene, said he was awakened by the sound of gunfire.

Kamloops Mayor Peter Milobar said he was shocked to hear the news.

“I guess you always hope that you live in a community where something like this wouldn’t happen,” he said.

“I think that the RCMP are all very well aware of the risk they are assuming and the fact that they’re still willing to put themselves out there for us on a day-in and day-out basis is beyond commendable.”

Mueller said there are a lot of solemn faces at the RCMP detachment.

“People who don’t wear the uniform and don’t put their lives in danger every day don’t have a true understanding of what you go through in those types of situations.

“I can assure you there’s great support and great concern for the officers involved. I’ve asked them to take care of themselves and get the support they require from their family and friends, and our organization will also be providing support.” (The Canadian Press, Kamloops This Week, CFJC)