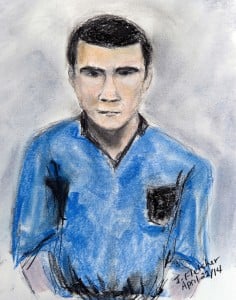 A sketch of Matthew de Grood as he appeared in a Calgary court on Tuesday April 22, 2014. (Janice Fletcher/CP)

Matthew de Grood is charged with first-degree murder after four men and a woman were stabbed to death at a house party that was being held last month to mark the end of the university school year.

De Grood, 22 and the son of a senior Calgary police officer, had been ordered to undergo a 30-day assessment to determine whether he was mentally fit to stand trial.

He appeared in court briefly by video link Thursday and a judge was told de Grood understands what is happening.

Outside court, de Grood’s lawyer, Allan Fay, said the finding has nothing to do with guilt or innocence.

“You have to keep in mind that being fit to stand trial only means that he understands the process and can instruct counsel,” Fay said. “You can still be very profoundly mentally ill and be fit to stand trial.”

The case is due back in court July 22. Fay needs time to go through thousands of pages of evidence disclosure he has received from the Crown.

Police have not said what they think motivated the attack.

They have said de Grood was invited to the party April 15 and mingled with guests before violence broke out.