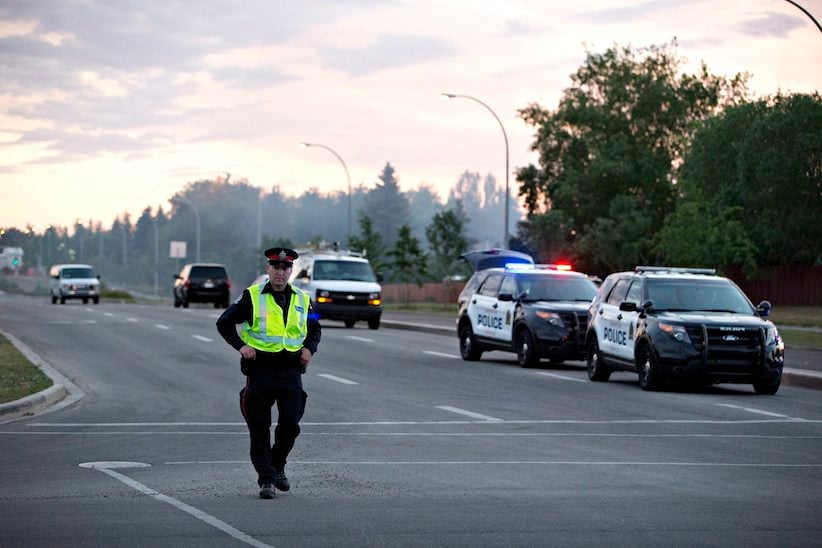 Police surround the scene where two officers were shot in Edmonton on June 8, 2015. (Jason Franson, The Canadian Press)

EDMONTON —  The suspect in a shooting that killed an Edmonton police officer and wounded another had been the focus of a lengthy hate crimes investigation.

“The online hatred and bullying of an Edmonton family had become extreme and the family members were increasingly worried about their personal safety, at which time the Edmonton Police Service became involved,” Knecht said at a Tuesday news conference

Knecht identified the suspect as Norman Walter Raddatz, 42, who was known to police, although he did not have an extensive criminal record.

Officers had gone to the man’s home in west Edmonton on Monday night to arrest him and that’s when gunfire broke out. It does not appear that officers returned fire.

Const. Daniel Woodall, a 35-year-old, eight-year veteran who worked on the hate crimes unit, was killed, and 38-year-old Sgt. Jason Harley was shot in the lower back.

Knecht said Harley’s body armour saved him and he was treated and released from hospital.

“He is doing well considering the magnitude of the event.”

Woodall was also wearing body armour, “but it was not engaged in this event. Sadly, he died on scene due to a catastrophic wound.”

Knecht said 53 bullets were found in the house and garage across the street from the shooting.

“Some of the bullets passed right through the house, which speaks to the power of the weapon being used. We believe a large-bore rifle was being used.”

The house the officers went to in order to arrest Raddatz burned to the ground Monday night and it’s believed he was inside. Police said at the time they were not looking for a suspect.

Knecht said an autopsy would be performed Tuesday.