Suspect in Moncton surrenders to RCMP

Justin Bourque was unarmed when he was arrested just after midnight

MONCTON, N.B. – A senior RCMP officer in New Brunswick says a man suspected in the shooting deaths of three Mounties and the wounding of two others in Moncton was unarmed at the time of his arrest early Friday.

The nerve-wracking manhunt came to an end at 12:10 a.m. after police apprehended Justin Bourque, who was wanted for one of the worst mass shootings in the RCMP’s history.

The harrowing search for Bourque lasted nearly 30 hours, causing a large swath of northwestern Moncton to be locked down with residents asked to remain inside their homes.

Supt. Marlene Snowman said Bourque was unarmed when he was arrested without incident but police did find weapons near the wooded residential area where he was found.

Snowman had to pause to gather her composure as she thanked residents for keeping their outdoor lights on, which she says helped police in their night-time search.

“It has been a very challenging 30 hours or more for the officers who worked around the clock to get this done,” she told a news conference.

Assistant Commissioner Roger Brown, the Mounties’ commanding officer in the province, says it will take time for the department to heal as he released the names of the officers who were killed and injured.

He said Larche, who worked in Miramichi before he joined the detachment in the Moncton area, was a highway patrol and general duty officer who received a commander’s commendation six years ago for saving the life of an unconscious baby in Moncton.

Larche had been a member of the RCMP for 12 years.

Brown said Ross joined the RCMP from Ottawa after graduation in July 2007 and was posted to the detachment based in Moncton as a general duty police officer.

Linda Ross, the aunt of Ross, told The Canadian Press on Friday that her nephew leaves behind his wife Rachel and an 18-month-old son. She said Rachel has another baby due in September.

“Dave has been married for four years and he was perfectly happy, he had found his soul mate,” Ross said in a telephone interview from Victoriaville.

“He was really happy, really passionate about his work and he was an excellent person.” 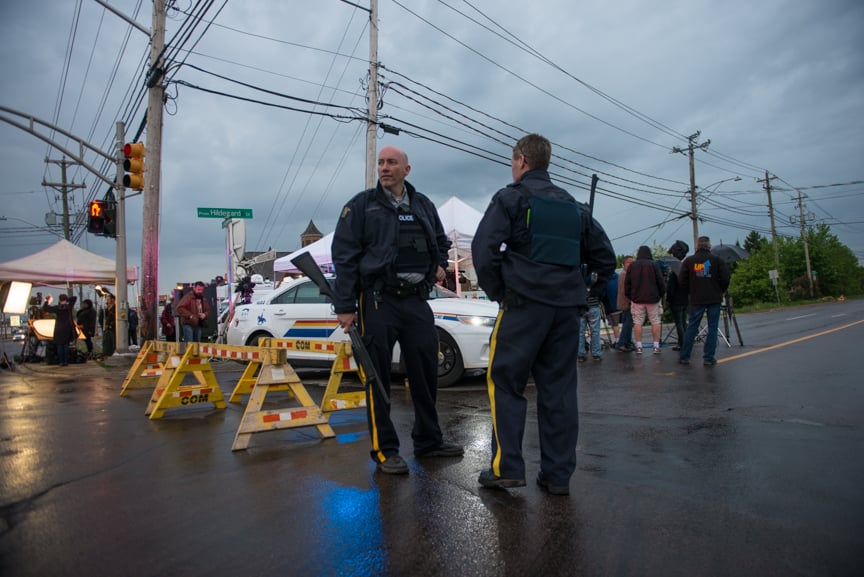 Armed police and the media at a roadblock along Mountain Road in Moncton.

“Fortunately, most people will never have to experience what our officers have gone through in the past couple of days,” he said. “Their resilience is truly remarkable.”

Brown said members of the RCMP will rally around the families of the fallen and the injured officers as the city also deals with the aftermath of the shootings.

“This is not something that anybody wants to live through. We all know that. The only way that we’re going to get through this is together,” he said.

“This is the start of a very long road for all of us.”

Brown said almost 300 officers were involved in the search for Bourque.

A woman who watched members of a tactical unit arrest the Moncton man in the frontyard of her home said the experience was scary.

“They started yelling, ‘Come out with your hands up!’ and they had their guns loaded,” said Michelle Thibodeau, 21.

“About five minutes later, Justin surrendered himself and he said, ‘I’m done,’ and then they arrested him and brought him to my frontyard where they had him sprawled on the ground.”

Linda Peacock, who lives a few doors down from where the arrest was made, said she was relieved the suspect had been apprehended.

“It’s very upsetting to know that he was so close to my home,” Peacock said. “I’m very glad they got him.”

Bourque, 24, was the subject of an exhaustive manhunt after the shootings Wednesday evening in the northwest area of the city.

Moncton, a city of about 69,000, had been at a virtual standstill up until the arrest, with buses pulled off the roads, government buildings shut down and schools closed as the RCMP scoured the streets for a heavily armed man.

Shortly after Bourque’s arrest, people were allowed outside their houses and roads that had been blockaded for more than a day were reopened.

Colin Slaunwhite, 24, said his mother was frantic because he had not been able to return home until Friday morning after playing hockey Wednesday.

“Relief. A whole bag full of emotions,” Slaunwhite said after he learned he could return home.

“It is going to take a while for the adrenalin to completely run out and everybody tries to comprehend what happened.”

Police including tactical officers began their manhunt Wednesday at around 7:30 p.m. when they responded to a call about a man walking along a road with what was believed to be a gun.

After the call, shots were fired and officers called for backup.

The RCMP said police officers from across the country were brought in to help arrest the suspect.

At one point, Bourque was seen Thursday morning but officers were unable to arrest him after he went into a wooded area, the RCMP said.

The RCMP said Thursday that of the two wounded officers, one was released from hospital and the other had injuries that were not considered life-threatening.

People laid flowers in a makeshift memorial on the doorsteps of the local Codiac RCMP detachment. One of the bouquets was wrapped in a ribbon reading, “Fallen heroes.”

Cpl. Danny Falls said while RCMP members were pleased to bring a measure of relief to residents, the force was contending with mixed emotions.

“There obviously have been long days and we suffered significant loss,” Falls said. “It will take some time to heal from that.”

Bourque was not known to police and investigators were trying to piece together his background. He was wearing military camouflage and carrying two rifles in a picture of him released by police on Twitter on Wednesday night.