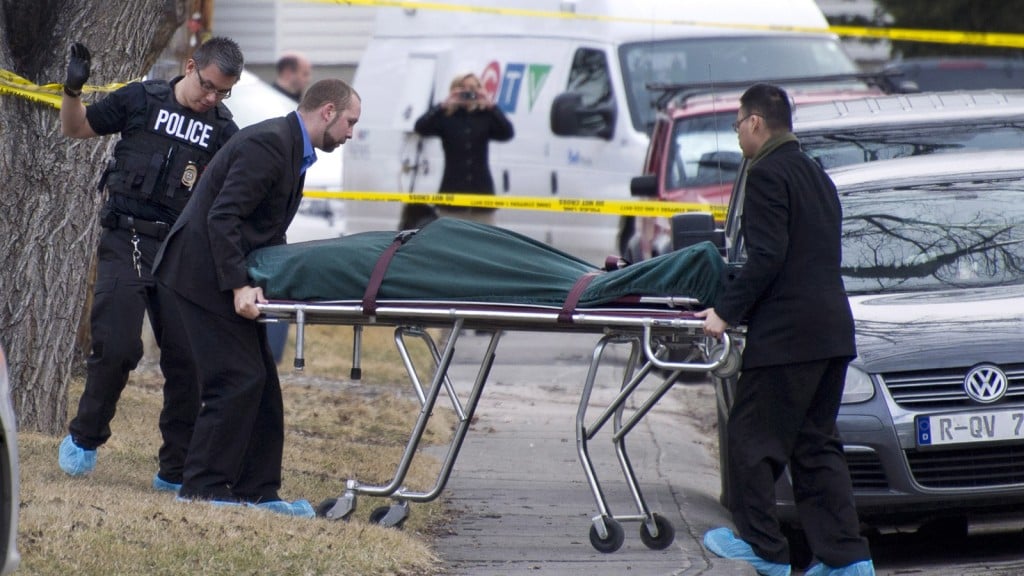 Police remove a body from the scene of a multiple fatal stabbing in northwest Calgary, Alberta on Tuesday, April 15, 2014. Police say five people are dead after a stabbing at a house party. THE CANADIAN PRESS/Larry MacDougal

CALGARY — A man accused of stabbing five young people to death at a house party is to undergo a psychiatric assessment to determine whether he can be found criminally responsible if convicted.

Matthew de Grood, 22, was charged in April with first-degree murder in the slayings at a celebration near the University of Calgary campus to mark the end of the school year.

He appeared in court Tuesday, in person, for the first time since his arrest. His other appearances had been through the court’s closed-circuit television.

Defence lawyer Allan Fay said although his client had already been declared fit to stand trial, the new assessment will provide more details about his state of mind.

“It’s to determine whether, in the opinion of a psychiatrist, at the time of the offences, whether my client was criminally responsible,” Fay said outside court. “In other words, he had the necessary intent or … he lacked it due to mental disease.

“Suffice it to say that he continues to be treated for mental illness.”

Fay said de Grood continues to be certified under the Mental Health Act by a psychiatrist at the Southern Alberta Forensic Psychiatric Centre, “which means in their opinion his mental situation is such that they require him to remain in a secure treatment facility.”

The Crown asked for the assessment.

“The first reason is he’s been committed under the Mental Health Act,” said prosecutor Neil Wiberg.

“The second reason is the report from the psychiatrist on fitness to stand trial recommended that a report be done on criminal responsibility.”

Wiberg said it’s possible that a hearing about criminally responsibility will be held later, but that depends on the defence put forward by de Grood’s lawyer.

Family members had no comment as they left the courthouse.

Wiberg said the Crown has been keeping them up-to-date.

“Obviously it’s very difficult for them. They suffered a tragic loss.”

A preliminary hearing has been scheduled to begin March 2.

A psychiatric review has already determined that de Grood is fit to stand trial because he understands the charges against him and is able to communicate with his lawyer.

The accused, the son of a senior Calgary police officer, has been in psychiatric care since his arrest.

Police have not said what they think motivated the attack, but say de Grood was invited to the party April 15 and mingled with guests before violence broke out.

Fay said his client is anxious about what lies ahead.

“As he is treated further, I think he becomes more lucid and the impact of what he’s facing really comes home to him.”