EDMONTON – Edmonton’s mayor said violent attacks overnight in the city that saw a police officer stabbed and several pedestrians run down with a cube van were the work of a “lone wolf.”

Don Iveson said a 30-year-old male suspect was in custody and being interviewed by police Sunday morning.

“To the best of our knowledge, this was a lone wolf attack,” he said as he urged calm. “It is vital now that we not succumb to hatred, that we not be intimidated by violence and that we respond with the loving strength of this whole community … We will not be divided.

“Terrorism is about creating panic and about sowing divide and about disrupting people’s lives. We can succumb to that or we can rise above it.”

All government and law enforcement agencies are working together on the case, he said.

Prime Minister Justin Trudeau condemned the violent events overnight ­as a “terrorist attack” and a “senseless act of violence.”

“Early reports indicate that this is another example of the hate that we must remain ever vigilant against,” Trudeau said in a statement, lauding first responders and police officers. 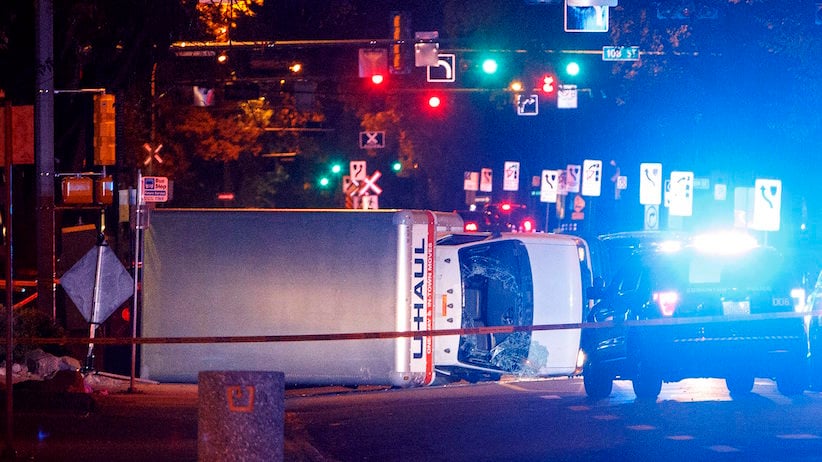 Police investigate the scene after a cube van ran into pedestrians and later flipped over while being pursued by police, in Edmonton Alta, on Saturday September 30, 2017. THE CANADIAN PRESS/Jason Franson

“We cannot — and will not — let violent extremism take root in our communities. We know that Canada’s strength comes from our diversity, and we will not be cowed by those who seek to divide us or promote fear.”

Edmonton Police Chief Rod Knecht said a police officer was taken to hospital and treated for non life-threatening injuries. Four people were injured by the van, but the extent of their injuries was not immediately known.

It all began Saturday night outside the Edmonton Eskimos CFL football game at Commonwealth Stadium where it was military appreciation night.

Canada’s chief of defence staff, Gen. Jonathan Vance, conducted the pregame coin flip and two CF-18 fighter jets did a fly-past before kickoff. More than 800 Boy Scouts were expected at the game and many were planning to camp out on the field afterward.

While the Eskimos were battling the Winnipeg Blue Bombers inside the stadium, outside a white Chevy Malibu approached a traffic control post at a high speed.

Edmonton police released grainy footage of a car ramming a crowd control barricade with a uniformed officer standing beside it. The footage shows the officer being tossed about five metres into the air as the car slams into the front of a parked police cruiser.

The video shows two people walking by with their dogs rushing towards the officer on the ground but they run off when the driver gets out of the car, runs over and appears to starts stabbing the officer. 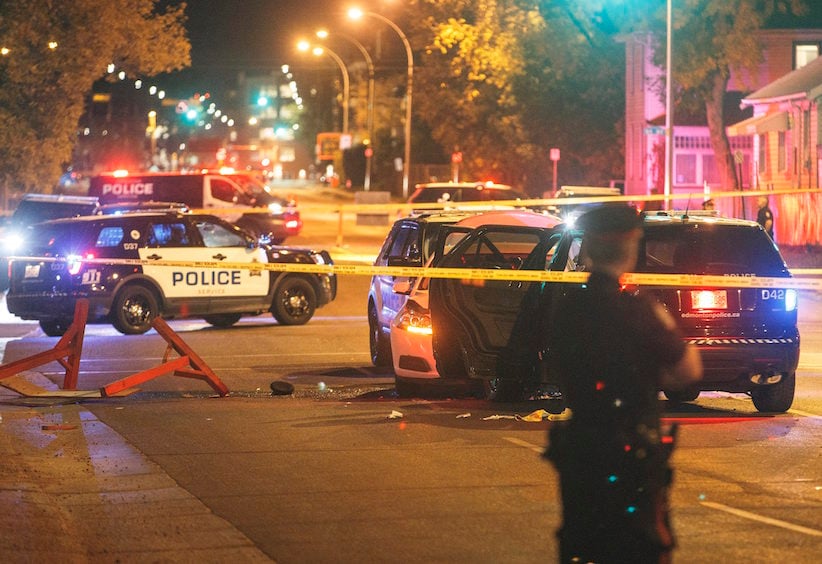 Police investigate the scene where a car crashed into a roadblock in Edmonton Alta, on Saturday September 30, 2017. THE CANADIAN PRESS/Jason Franson

The police officer appears to wrestle with the driver on the ground and, at one point, it appears the officer is on top of the driver. Footage shows them both getting to their feet and the driver runs across the street while the officer slowly follows behind him into traffic.

Police launched a manhunt for the suspect.

Knecht said an Islamic State flag was found in the front seat of the car and was seized as evidence.

A few hours later, while fans filed out of the game and were re-routed around the crime scene, a U-Haul cube van was stopped at a checkstop north of downtown.

When the driver was asked for his licence, Knecht said the name on the identification was close to that of the registered owner of white Malibu.

When confronted, Knecht said the U-Haul sped off toward downtown with police cars in pursuit.

The van intentionally swerved at pedestrians in crosswalks, Knecht said.

“It is believed at this time that these two incidents are related,” Knecht said. “These incidents are being investigated as acts of terrorism.”

The name of the suspect was not released. Knecht said he was known to police, but there was no warning for the attack.

“It’s left us shocked at the indiscriminate cruelty and angry that someone might target their hatred at places where we gather with our families and friends,” she said in a statement Sunday, praising first responders for their work.

“Hatred has no place in Alberta. It’s not who we are. We are in this together and together we are stronger than any form of hate.”

In a tweet Sunday, Public Safety Minister Ralph Goodale said “Canada will not be intimidated by terrorist violence.”

“At this time, the national terrorism threat level for Canada remains at ‘medium’ where it has stood since the fall of 2014,” his spokesman Scott Bardsley wrote, adding Canadians should report any suspicious activity.

Another police press conference is scheduled for 3 p.m. Edmonton time.

Austin Elgie, manager of The Pint bar just west of the downtown core, saw the van zoom by with police giving chase.

The van “peeled” into an alley where people were smoking, he said.

“There were like 10 cop cars following him … It was crazy. It just came around the corner, ripping. I thought at first he was pulling over for the cops coming by, but he was clearly the one they were chasing.”

Elgie said the van hit a man who was a bar customer.

“I have a registered nurse on my bar team and I grabbed her and had her look after the guy until the ambulance came.

“He was breathing and we got him in the ambulance and he was still breathing.”

The chase came to an end outside the Matrix Hotel, only a few blocks from the bar, when the van rolled on its side.

Natalie Pon tweeted that she was at a wedding at the hotel when the crash happened.

“They’re keeping us away from windrows/the lobby,” she said.

Pon posted pictures of the U-Haul on its side with a large hole in the windshield.

Witnesses told local media they saw the suspect being pulled from the vehicle through the broken windshield and then placed in handcuffs.

— with files from Andy Blatchford in Ottawa