Sylvia Tyson moved to New York with a plywood guitar

Sylvia Tyson’s first guitar came from an Eaton’s catalogue. It was a cheap wafer of an instrument, painted with a cowboy lassoing a steer. “I think it was made of plywood,” she says.

Her town of Chatham, Ont., didn’t have a guitar teacher, but she discovered chords and octaves at church. She sang in the choir from the age of 12, conducted by her mother. Phyllis Fricker was a classically trained organist who played in coffee houses amid raising four children. At home, she kept an upright piano in the basement, where she would play through Chopin’s waltzes. “You could hear it through the floor,” Sylvia recalls. Her father, William Fricker, sold Eaton appliances by trade and played folk music by ear. Talent flowed through the family, and when Sylvia cleaned dinner dishes with her older sister, Sonia, she says, “we used to sing together in harmony.”

By the time the Fricker sisters were singing the Everly Brothers, Sylvia was listening to her own radio each night in her bedroom. The family also had a television, and they would watch Pat ’n’ Johnnie, a popular Detroit talk show of questionable quality. “When they didn’t have anything to say, the cameras would focus on the fish tank,” says Sylvia. Meanwhile, the highlight of school was literature class, particularly reading the Brontë sisters and equally mature subject matter. “I hated Nancy Drew,” says Sylvia. “I was not a juvenile reader.” In Grade 13, she dropped out of school to work as a salesclerk for a jeweller.

FROM THE ARCHIVES: “There’s always a market for nice songs, nicely sung,” a 1965 Maclean’s profile of Ian and Sylvia

Luckily, Sylvia didn’t drop out of choir, and chapel singing became a transferable skill. She played at coffee houses in Chatham, where she met the employer of Ian Tyson, who was working at a glass factory. The man connected the two musicians by phone, and Ian invited Sylvia to Toronto. “I just wanted to have a look around,” she says. Ian asked her to sing with him at Toronto’s First Floor Club. “They didn’t boo me,” is all she remembers of the gig. The trip led her—in the fall of 1959, at age 19—to pack one suitcase and her cowboy guitar and move to the city. Her parents shrugged. As she says, “their view was if it didn’t work out, I could always come home and get married.”

Sylvia never moved home, but she did marry. After playing as a duo in Toronto, she and Ian moved to New York’s Lower East Side, where Sylvia lived by herself in apartment with five flights of stairs, no elevator and a tub in the kitchen. The couple married in 1964, and they began writing music, encouraged by peers like Bob Dylan. “He was just this kid who was basically sleeping on people’s couches,” says Sylvia. “If he could write songs, we could write songs.”

Ian and Sylvia caught the eye of Dylan’s manager, Alan Grossman, who helped them release their first album of traditional and spiritual songs and perform at the Newport Folk Festival in 1963. When Ian wrote Four Strong Winds, the couple solidified their place as part of the 1960s folk revival. The first hit Sylvia wrote, You Were On My Mind, was not about anyone in particular. Rather, she considers herself a storyteller, Charlotte Brontë with rhythm. “That song’s been very good to me,” she says.

Although Ian and Sylvia shared a manager with Dylan and later Janis Joplin, Sylvia remained straight-edge. She never smoked, and she didn’t drink alcohol until she was in her 30s. “Why drink alcohol when you could drink soft drinks or water?” she says. She didn’t obsess over fame. “It was very organic,” she says. “You played your music and hoped people liked it. Nobody seemed more extraordinary than anyone else.” 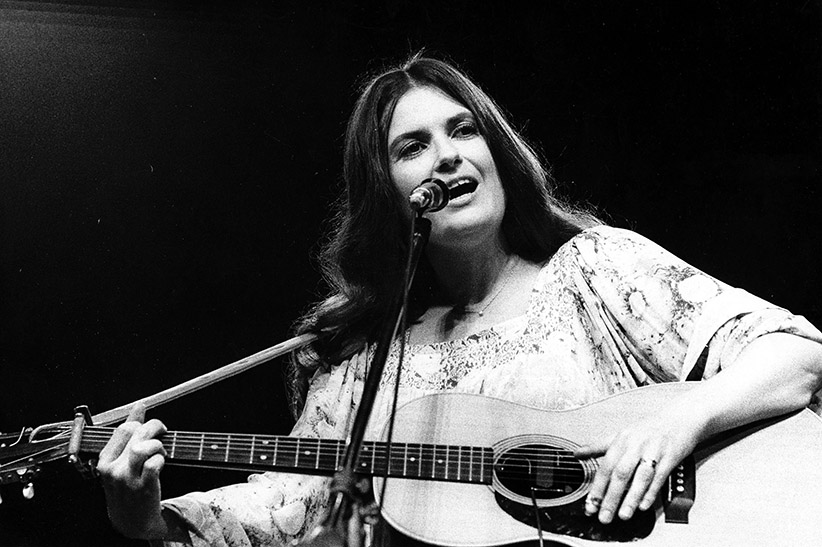 Tyson, performing in 1976, considers herself a storyteller—Charlotte Bronte with rhythm. (Doug Griffin/CP)

The Tysons toured the States and Canada, as well as England when Sylvia was six months pregnant with their son, Clay. “I don’t think we’d ever thought we’d made it,” she says. “I always thought we could go further.”

With the recession of folk music in the 1970s, Ian and Sylvia reinvented themselves as country musicians. They named their new band Great Speckled Bird after a Roy Acuff song, “carry you to Heaven on the wings of a great speckled bird.” Tyson also has a special affinity for birds. “I’ve always been rather interested in crows,” she says. “Not that they’re cute. They’re actually quite nasty. They’re like the bikers of birds, but they’re clever.”

Fans mostly accepted the switch to country, although audience members occasionally walked out when they saw steel guitars on stage. In 1975, Ian and Sylvia broke up—both the marriage and the band; but they have since appeared on stage together. In 1993, Sylvia formed a group called Quartette, and she was awarded the Order of Canada a year later. She has published novels and is working on a murder mystery, pursuing her love for literature. She prefers not to tour. “The romance of the road is gone for me,” she says.

When giving advice to upcoming musicians, she tells them, “believe in your own stuff.” From her own body of “stuff,” she doesn’t have a favourite song. “All your songs are like your kids,” she says. “You don’t really play favourites. When it’s finished you send it out in the world.” — Meagan Campbell