Syrian refugees arrive in Montreal: 'My future is starting now' 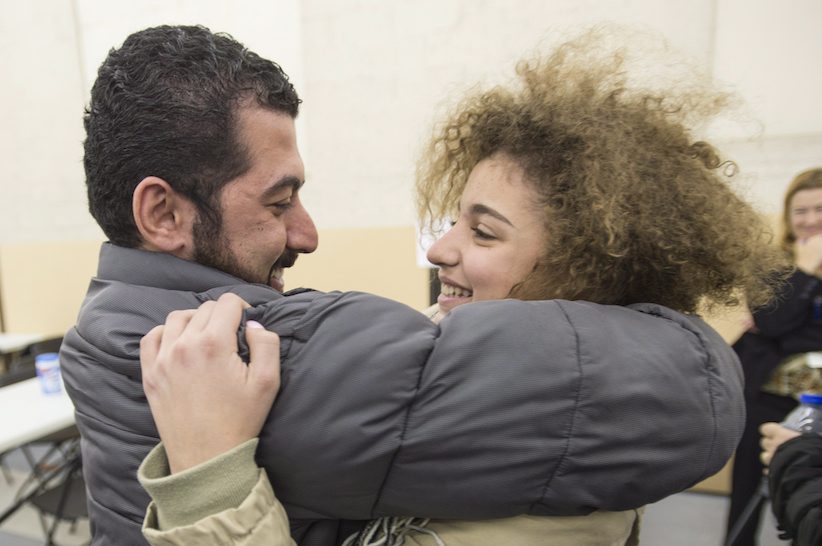 Newly arrived Syrian refugee Laila Beylouneh, right, is hugged her uncle Anas Fransis as they are reunited at a welcome centre, in Montreal, on Dec. 12, 2015. (Paul Chiasson, The Canadian Press)

MONTREAL — The arrival of a second federal government planeload of Syrian refugees in Montreal Saturday night was “a real Christmas present” for one Syrian man who was reunited with family he hasn’t seen in eight years.

Anas Fransis and his mother were at the welcome centre near the airport to welcome Francis’ uncle and his wife, their two teenage daughters and Fransis’ grandmother, who were among the 161 privately sponsored refugees to make the trip from Beirut to Canada aboard a government aircraft.

Fransis ran out to greet them, twirling his cousins and embracing the adults. His grandmother, Laila Saeed, was the last one through the door, her face wet with tears.

His 13-year-old cousin Laila Beylouneh was excited for her family’s new start.

“My future is starting now,” she told reporters in English. “I wish all my dreams will come true.”

Quebec Premier Philippe Couillard was on hand with Federal Immigration Minister John McCallum and Montreal Mayor Denis Coderre to greet the refugees, who landed around 8 p.m. Saturday evening. Numerous other federal and provincial cabinet ministers were also in attendance.

Speaking to volunteers ahead of time, Couillard said he was taking a special interest in the proceedings because he and his wife will be sponsoring a refugee family who are set to arrive in early 2016. He said he was proud of Quebec and Canada’s efforts to welcome the newcomers.

“It makes me extremely proud that we are able as a people to return a horrible situation like these people are fleeing, and to show them the face of freedom, the face of welcome, and the face of brotherhood,” he said.

The arrival comes less than 48 hours after a government aircraft brought 163 refugees to Toronto on Thursday.

More than 400 refugees have arrived by commercial flights since the federal Liberals took power last month, but these have been the first to be brought by government aircraft.

Related reading: The long road from Syria to Peterborough

Upon arrival at Montreal’s Pierre Elliott Trudeau Airport, border services agents confirmed the refugees’ identities and issued them interim health program certificates. By the time they were transported to the centre they were officially permanent residents of Canada.

Jerais Der Kaspar, of Aleppo, Syria, arrived on the plane with his wife, Emelda Margarian, and their three children, ages 10, 11, and 17. Wearing a new blue-and-tan winter coat that Couillard and his wife helped him try on, he said he was looking forward to a new life in Canada after fleeing the bombings in Syria.

“Canada is the best country, and I wish to be in the best,” he said in English. “This is a good beginning.”

All but one of the 161 refugees on Saturday’s flight were expected to stay in Quebec, which has set aside $29 million until the end of 2016 to settle over 7,000 refugees. One refugee was continuing on to P.E.I.

All were sponsored by private groups, many of whom filed the necessary paperwork months ago in order to bring in some of the estimated 4.3 million Syrians displaced by the ongoing civil war in that country.

The federal government plans to bring 25,000 Syrians to Canada by the end of February.