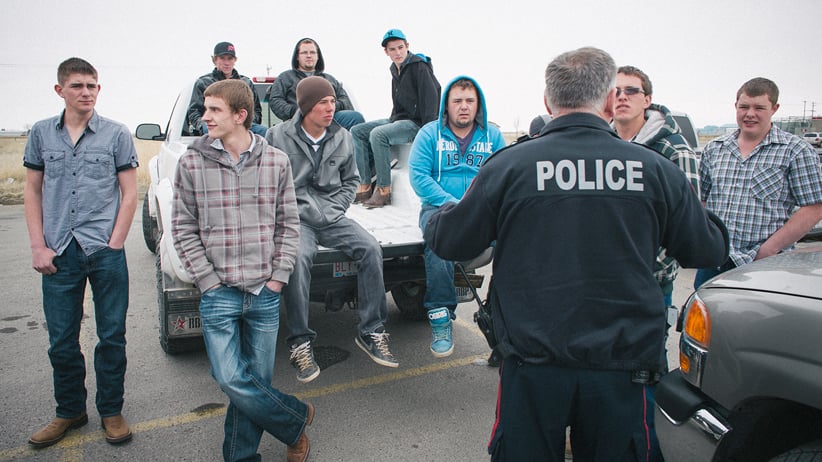 It’s one o’clock on a damp Sunday afternoon in Taber, Alta., three weeks after the town council enacted a bylaw that imposes a curfew, fines for swearing and yelling in public, and gives police powers to break up groups of three or more people. Like every other Sunday here, pickup trucks begin pulling into the Wal-Mart parking lot. Ten guys in jeans and ball caps, aged 15 to 21, hop out and crack open their extra-large coffees from the Tim Hortons on the other side of the lot; some light cigarettes.

Many of them have come from the morning service at the Reinland Mennonite church. Young Mennonites from all over—some have travelled for more than three hours—have gathered here every week for as long as they can remember. Alternating between English and Low German, they talk about cars and watch videos on their phones. After six days spent working on farms and in factories, it’s time to relax.

A few minutes later, a Taber police car pulls up. The officer gets out and walks toward the group. “Are you boys swearing?” he asks, looking them up and down. “We got a call from a woman who says you were swearing at her.” “No, sir,” they mumble. “Any of you been drinking? Any liquor in the vehicles?” he asks, peering into the back windows of their trucks. “Are we going to get a ticket?” one asks. “No,” replies the officer, “as long as you’re not drinking or swearing at people.” He looks at the last vehicle and drives away.

They expected this. The officer will drive by a couple of more times throughout the day, they say. “I’m used to it,” says 18-year-old Isaak Froese, who attends the local Mennonite school. “But it definitely doesn’t feel good.”

Last week, the town of Taber­—known as Canada’s corn capital­—and its 8,100 residents were thrust into international headlines because of their new “community standards” bylaw. Social media erupted with anger and confusion, with thousands of posts gleefully comparing Taber to Footloose (the movie about a rural town that bans dancing to crack down on unruly teens). But what outsiders failed to mention, and what everyone here talks about in hushed tones, is the town’s open secret: what they see as the Mennonite problem.

Many who live in Taber describe the Mennonites as rude and destructive. Local business and restaurant owners, who wished to remain anonymous, said they have to kick out groups of Mennonite kids on a regular basis for fighting, shouting and throwing things at other customers. “Nobody will even say the word. I couldn’t tell you how many police, politicians and public leaders I’ve seen do a little knowing smile and wink when it comes to issues of young Mennonites racing their trucks around town . . . drinking and driving, littering and harassing local residents,” wrote reporter J.W. Schnarr in his March 11 column about the bylaw in the Taber Times.

One resident, Richard Alberta, says he recently saw a group of Mennonite teens shooting paintball guns at stores and cars, burning picnic tables and fighting at the town campground. He wishes the bylaw had come sooner. “The bylaw is a Mennonite law,” he says. “If it targets and controls them better, I have nothing against that.”

Another resident, Jayden Dorchester, says the new bylaw makes sense because of the Mennonite kids who hang around the parking lots in big groups. “They can just be bad kids. They break into vehicles . . . chew tobacco and they’ll spit at people,” he says. “They [the cops] never seemed to be able to break them up, for some reason, so now they can actually go in and do something.”

There are an estimated 20,000 to 30,000 Low German Mennonites living in southern Alberta. Descendants from 16th-century Anabaptist denominations in central Europe­ (which also included Hutterites and the Amish­), Mennonites from Low German-speaking colonies from the Russian Empire—near modern-day Ukraine—fled religious persecution in the 1870s to Manitoba and Saskatchewan. From there, thousands of them left for Mexico and parts of South America in the 1920s to avoid provincial education laws mandating their children attend public school. Most continued their work in farming and food processing after they moved. In the ’80s, thousands started immigrating back to Alberta to escape economic hardship and drug-related violence.

John Hiebert, the bishop of Taber’s Reinland Mennonite church, says around half his congregation have lived in the area for generations, while the other half are newcomers from Mexico, who still travel back to Mexico a few times a year for work and to visit relatives. Hiebert, who was born and raised in the Mennonite community in Chihuahua, Mexico, says it can be a major culture shock for families starting a new life in Canada, especially when it comes to relations with law enforcement. “In Mexico, if you get pulled over by the police, you could pay them off and be free to go—no consequences,” he says. “The attitudes are different down there, and these kids bring that with them here. That’s why some of them have such a hard time obeying authority.”

Discussions about a new bylaw started in 2014, a year after the Taber Police Force received 70 complaints from residents about disturbing goings-on around town, mostly involving Mennonites. Insp. Graham Abela says most of the complaints were about “used condoms, urine and other bodily ﬂuids” found the day after “large gatherings” took place in parking lots around town. “We needed some more tools in our toolbox to deal with these groups,” including Mennonites and non-Mennonites, he says. “It’s very few people actually that cause the trouble, which gives everyone a black eye.” Town council will review the bylaw again in six months.

In areas that include Taber, the literacy rate among Mennonites of all ages remains low as many parents prefer to home-school their children or send them to Mennonite church schools, which are rarely taught in English. But there has been significant improvement lately, says George Epp, liaison for Mennonites at the regional school board and coordinator for newcomers at the Mennonite Central Committee, which helps more than 3,000 Mennonite families a year with employment and social services. When Epp first started his work 13 years ago, there were only 80 Mennonite children enrolled in the local school board. Today, there are more than 1,200. Epp says it’s not the bylaw itself that’s bad for the community, but the hateful ways people have responded to it. “We still have a long way to go in Taber,” he says. “This bylaw is another bump in the road to creating a more tolerant society, and I’m looking forward to it blowing over. Then, we can get back to trying to get people here to care more.”

Young Mennonites agree that some of them cause trouble, but they also resent being blamed and judged for the actions of a few. “We know everyone thinks Mennonites are bad people, that they ruin stuff. I don’t disagree,” says Johnny Wiebe, 20, who attends the Reinland Mennonite church and works in manufacturing. “Some drink, litter, rev engines and drive recklessly. But usually, we’re on the receiving end.” Wiebe says he has had rocks thrown at his car and was beaten up by non-Mennonites last summer. “They often tell me to go back to Mexico, and call me a ‘f–king greasy Mennonite.’ ”

Back at the parking lot, Pete Red, 21, stands outside Tim Hortons with a coffee, and crosses paths with non-Mennonite Taber local Kim Foster and her two sons. Her husband, Danny, is close behind. Foster shouts for her husband to hurry up; she claims Red just swore at her and the kids. 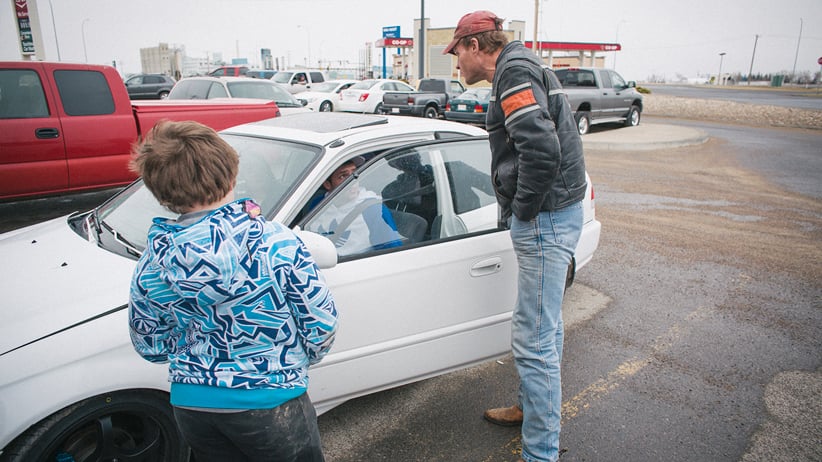 Just then, the same police officer returns, and Foster bolts toward him: “That kid back there, he swore at me and my kids! He called them faggots and told them to f–k off!” she screams into the car window, pointing at Red as he drives out of the parking lot. The officer goes after him. Foster smiles and watches as Red gets pulled over. “Now the police are going to take care of him and the rest of them,” she says, “because that’s the law now.” Her husband nods his head. “These are the Mennonites,” he says. “We’re trying to get in here, do what we need to do, and these guys come here and run Canada.” He says he hopes the police will use the bylaw to control the Mennonites who gather here.

Red drives back to Tim Hortons and says the officer gave him a verbal warning against swearing, not a ticket. He says he didn’t swear at Foster or her kids, but that he defended himself after she told him to get out and go back to his own country. “I told her that I’m from this f–king country, and that’s when she ran to the cops,” he says. “And I know the cop that just pulled me over, he’s a good one. I don’t think the police will actually write tickets to us. I think they know this whole thing is stupid.”