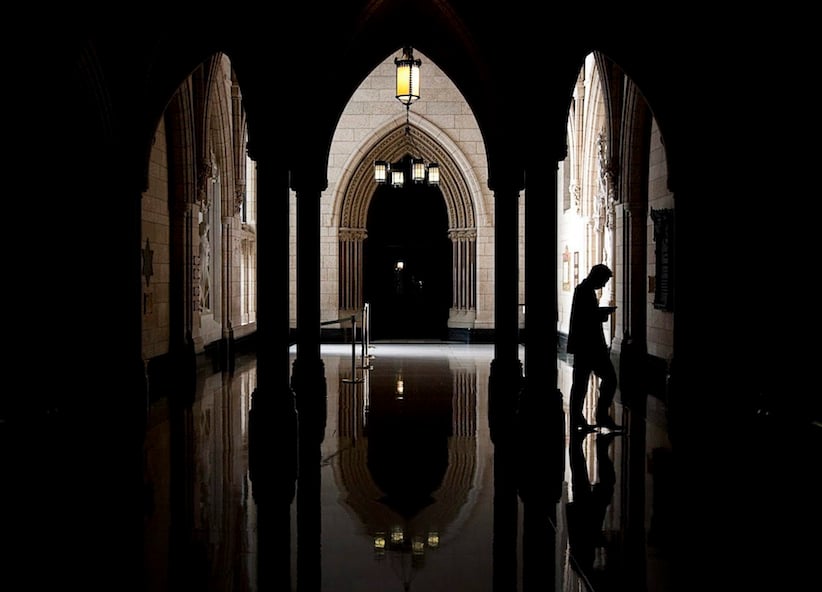 A person walks through the halls of the centre block on Parliament Hill in Ottawa on Wednesday Sept. 22, 2010. (Sean Kilpatrick/CP)

OTTAWA – A new analysis by one of Canada’s biggest banks says the federal government is on track to run $150 billion in budget deficits over the next five years.

The TD Bank report, released Tuesday, also estimates Ottawa’s current fiscal path means it will take more than a decade to bring the budget back into balance — unless the government raises taxes or cuts spending.

The bank says it produced the numbers after re-calculating Ottawa’s predicted shortfalls to account for the Liberal government’s electoral spending vows and TD’s below-consensus outlook for economic growth.

“A key takeaway from our analysis is that absent additional revenues or adjustments to spending relative to the status quo, the federal deficit is poised to remain stubbornly elevated over the medium term.”

The Liberals are projecting a shortfall of at least $18.4 billion next year — a deficit that’s widely expected to climb closer to $30 billion in the March 22 budget.

Ottawa’s recent fiscal projection didn’t factor in billions in Liberal spending commitments — a sizable chunk of which is expected to go towards infrastructure projects in hopes of jump-starting a struggling economy.

During last year’s election campaign, the Liberals vowed to cap annual deficits at $10 billion and to balance the books in four years, a pledge they have been backing away from while citing the sliding economy.

In releasing a fiscal update last week, Finance Minister Bill Morneau insisted the government’s starting point was “much further back” than the Liberals thought.

Morneau’s calculations, primarily based on the estimates of private-sector forecasters, included an additional $6 billion per year for economic prudence that the government argued was necessary to account for risk.

The government’s update showed the fiscal outlook for the next two years, while the TD report Tuesday broadened the projection period to five years.

The authors say the study also factors in the positive growth benefits from stimulus spending.

The analysis also warned that another key Liberal election promise is at risk: lowering Canada’s debt-to-GDP ratio from about 31 per cent to 27 per cent over four years. The ratio, also known as the debt burden, represents a government’s capacity to repay debt.

“This underscores the need for a credible long-term anchor on spending and revenue that helps keep the budget on a sustainable track in a low-growth world,” the report said.

After the TD report’s release, a spokesman for Morneau said the Liberals would stick to their promise to shrink the debt-to-GDP ratio, even as they make investments billed as leading to long-term growth.

“Canada has the lowest debt-to-GDP ratio in the G7, and there has never been a better time to invest,” Daniel Lauzon wrote in an email.

“We will maintain this ratio on a downward track throughout our mandate.”