Salim Alaradi, a Canadian of Libyan origin, was on vacation in the U.A.E. when he was arrested in August 2014 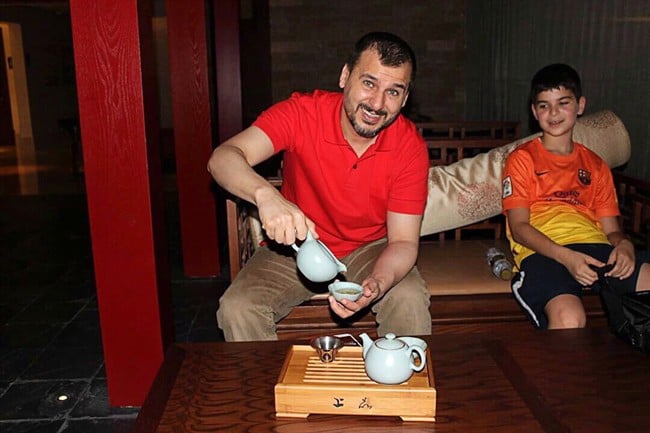 Canadian Salim Alaradi and his son, Mohamed Alaradi are shown on a family vacation in the United Arab Emirates in a 2013 family handout photo.

An Ontario teen is calling on the new Liberal government to secure the release of her father, who has been languishing in a United Arab Emirates prison without charge for more than a year.

Marwa Alaradi has written to Prime Minister Justin Trudeau and every MP on Parliament Hill asking for Canada to intervene in her family’s ordeal.

“We want them to negotiate with the U.A.E., to understand what’s going on,” she told The Canadian Press in an interview. “I showed them that I need help.”

Salim Alaradi, a 46-year-old Canadian of Libyan origin who was running a business in Dubai, was abruptly detained without explanation in August last year.

His daughter now hopes an intervention from the federal government may help set her father free.

“My father has been going through injustice for more than a year now,” she said. “It’s not a case of a criminal, my father did nothing wrong, he was a normal person.”

Alaradi was born in Libya and immigrated to Canada from the U.A.E. in 1998, living in Vancouver with his family. He decided to return to the U.A.E. in 2007 to run a home appliance business with his brother.

He and his family were on vacation in the U.A.E. when he was arrested. For two months his family didn’t know if he was dead or alive. They then found out he was being held at an Abu Dhabi prison, though they have never been told why.

The family’s communication with Alaradi has been limited and they have expressed concerns that he is being mistreated behind bars.

Amnesty International has noted that Alaradi was among 10 men of Libyan origin reportedly detained in the U.A.E. at the same time.

A development this month, however, is being seen as a sign of progress.

Alaradi was recently seen by a state-assigned lawyer and his file was transferred to the prosecutor general’s office, marking what the family believes is the first sign of legal advancement in his case, his daughter said.

“We know from this lawyer that my father has no accusations,” she said. “He said the file was closed and transferred to the prosecutor general’s office. They’re going to decide whether they’re going to release my father…we feel like this is a positive transition.”

Canadian consular staff were also able to visit Alaradi in prison last week, his daughter said. They told his family his health was deteriorating and that Alaradi was refusing some meals as part of a protest launched by other detainees.

“They said my father has lost weight and his health is getting worse,” Alaradi’s daughter said, adding that consular staff had also tried to get Alaradi a new pair of shoes but were barred from doing so by prison officials.

The visit is thought to be just the fourth time consular staff have been able to see Alaradi since his detention began last year, his daughter said.

A spokeswoman with the department of foreign affairs confirmed the visit, and said consular services were being provided to Alaradi and his family.