A decade ago, Maclean's labelled North Central 'Canada's worst neighbourhood'. It remains a source of controversy and neglect.

Take a deep breath, Regina. This might sting a little.

Ten years ago, I wrote a mean story about you. And I’m not in the least bit sorry.

The piece was on North Central, a 153-block area on the edge of downtown that stood separate in almost every possible way from the rest of the city: Largely Indigenous, impoverished, plagued by drugs and crime with many of its 10,000 residents marginalized and their problems ignored. We called it Canada’s Worst Neighbourhood.

It was a nasty label, but entirely justified. I had toured ramshackle houses where IV drug users had left their bloodstains on the ceilings and torn out and sold the copper plumbing in order to find the money to get high. Residents told me how they were afraid to venture out at night because of the gangs and violence. There was the local park where the city had removed the playground equipment because too many mothers were leaving their kids there in the wee hours while they smoked crack or turned tricks. Rates of suicide, diabetes, heart disease, HIV and mental illness were all many times greater than in the nice parts of Regina. North Central accounted for a quarter of all police calls. And girls as young as 11 or 12 were regularly working its stroll.

You don’t expect the Chamber of Commerce to give you an award for pointing out stuff like that to a national audience, but I have to admit, I was taken aback by the vitriolic reaction. The then mayor, Pat Fiacco, called me a “chickens–t.” The Leader Post ran stories about “the controversy” for almost three weeks straight. A local radio station started a campaign to collect copies of the issue and shred it in a wood-chipper, vowing to mail the remains back to us. (They never arrived.) The gist of the complaints was that I had done Regina a disservice by simply focusing on “the negatives.” Although one suspects that mentioning the lovely floral displays in Wascana Park alongside my descriptions of “Puttin’ Out Houses”—homes doubling as makeshift brothels with the furniture pushed against the walls and floors littered with used condoms and drug paraphernalia—wouldn’t have mollified the critics. As it was, no one disputed any of the facts or statistics in the article.

I did feel badly for people in North Central who had freely shared their opinions and were then forced to recant under community pressure. I talked with my bosses about going back and doing a follow-up piece, but we feared it might inflame passions rather than cool them. When one of my colleagues went for a second look, mayor Fiacco offered to take him on a tour of ongoing improvements in the neighbourhood and then led him into an ambush meeting with hand-picked residents, the chief of police, two federal MPs, a city councillor and a gaggle of reporters. He absorbed a couple of hours of political posturing and theatrical abuse on my behalf.

Some good did come out of it all. The mayor convened a summit meeting with First Nations leaders about Indigenous concerns, and promised to develop a comprehensive plan. Ottawa and the province suddenly found $2.2 million to kick in for low-income housing. And the city council approved Regina’s first urban reserve in North Central—a First Nation-owned gas bar and convenience store that provided employment and income. My wife bought me a sweatshirt with the Saskatchewan Wheat Pool logo on the front. When I wore it, people would stop me on the street in Toronto and want to talk about the Roughriders.

MORE: Read the original story from 2007

The strange thing, however, was that the story never really went away. For years, I’d get emails, voicemails and Facebook postings either praising or lambasting the piece. Someone put it on a reading list at the University of Regina journalism school, and every spring I’d get interview requests from students working on papers. The city’s media marked the first anniversary of its publication. Then the fifth. And (oddly) the eighth. Last week, the Leader Post ran a big spread to mark its first double-digit birthday. “Ten years on, North Central remembers fallout from Maclean’s magazine visit,” was the headline, as if Jan. 15, 2005 somehow remains a day that lives in local infamy.

The latest piece, by Brian Fitzpatrick and Kerry Benjoe, is well done, mixing quotes from the original story with reaction from residents and community leaders. A number of people are still angry with me. The new mayor, Michael Fougere, calls my story a “drive-by” that “generalized some negatives of our city.” It’s criticism that’s at least more polite than his predecessor’s, if not better informed.

But what really caught my attention were the statistics cited by the Leader Post. The neighbourhood has been the scene of 10 of the city’s 17 murders over the past two years. Gun crime is up substantially. So is meth use. And at least five major gangs and two biker clubs are active in North Central. Overall, an area that is home to 4.5 per cent of Regina’s population continues to account for 17 per cent of its crime.

A deeper dive on the web is even more depressing. The Regina Police Service maintains a Community Crime Map, which tracks offences by nature, number and location. In the 47 sub-categories where police laid charges over the past year, North Central ranks No. 1 in 32 of them, including arson, assault, attempted murder, residential break and enters, sexual assault, and violence/threats. And it’s in the top five for all but four; it’s a perpetual bright red splotch on the cops’ visual “heat map,” even as crime has dropped across the city. (In Maclean’s 2016 survey of Canada’s most dangerous cities, Regina ranked eighth out of 100 communities—first in aggravated assault, seventh in homicide, 22nd in firearm use, and 25th in sexual assault as figured per 100,000 population.)

Census data—the perhaps less reliable results of the Tories’ voluntary 2011 national household survey—show that 34 per cent of families in North Central are “lone parent,” versus 19 per cent in the rest of Regina. Forty-five per cent of residents reported income of less than $20,000 a year, compared to 30 per cent in other neighbourhoods, and 34 per cent are classified as “low income” versus 13 per cent overall. Fifty-six per cent of people in North Central are renters, and 22 per cent report that their dwellings need “major repairs.” And in a neighbourhood with the cheapest rents in town, 52.8 per cent report that they spend more than 30 per cent of their income on shelter.

Food bank use continues to gallop in the city, with some 9,000 clients a month. The Regina Food Bank received 98,857 requests for service last year, and reports a 78 per cent increase in users since 2008. Unemployment sits at 7.4 per cent, more than a point above the rest of the province—although the rate among First Nations people is 19.6 per cent.

Intravenous drug use, and all its associated ills, also remains a problem. The rate of HIV infection in Saskatchewan is twice the national average and has remained stubbornly high since 2009, the year Brad Wall’s government decided to scale back the provincial needle exchange program.

There is some positive news, though. Police in Regina have made progress; auto thefts and assaults halved over the last decade, and  break and enters were down by more than two-thirds since 2005. Attendance at the city’s public high schools has increased by 80,000 hours over the last school year; seven in 10 students are now graduating on time. And as this week’s Leader Post story noted, there have been some significant investments in North Central recently, including $41 million for a soon-to-be-opened community centre and $48 million for two new schools. That is, however, still a fair bit less than the city and province have invested in the $278-million football stadium—$73 million and $80 million, respectively—that will become the Riders’ home this summer. The new Mosaic Stadium is located in North Central—just like the former Taylor Field.

The problems that bedevil North Central are the same ones that challenge lots of communities, especially in Western Canada. Many are the legacy of the reserve system and residential schools, complicated by transient populations and gaps in government mandates. If they were easy—or cheap—to fix, someone would have dealt with them long ago.

Still, you have to wonder what role attitude plays. 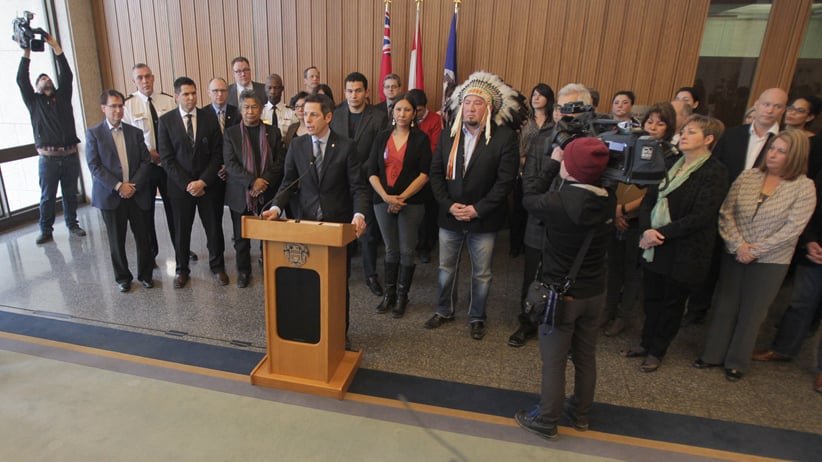 Derek Nepinak, Grand Chief of the Assembly of Manitoba Chiefs, and Winnipeg’s Mayor, Brian Bowman (speaking) were among the attendees at a media conference at City Hall in Winnipeg today. A Canadian magazine declared that Winnipeg is Canada’s most racist city. Thursday, January 22, 2015. (Chris Procaylo/Winnipeg Sun/QMI Agency)

At the beginning of 2015, my colleague Nancy Macdonald wrote a searing article about her hometown, labelling Winnipeg as the most racist place in Canada. After reading it, I warned her that she’d be an unwelcome visitor for a good long while.

The day after the story appeared online, Mayor Brian Bowman called an early morning press conference at City Hall. Flanked by activists and Indigenous leaders, he gave an heartfelt response to the charge. “We do have racism in Winnipeg … You can’t run away from facts,” he said, his voice cracking with emotion. “Ignorance, hatred, intolerance, racism exists everywhere. Winnipeg has a responsibility right now to turn this ship around and change the way we all relate: Aboriginal and non-Aboriginal, Canadians alike, from coast to coast to coast.”

Ovide Mercredi, a former national chief of the Assembly of First Nations, thanked Maclean’s for the story, and challenged us to follow up with pieces on individuals and communities that were successfully battling against the problem of racism.

Winnipeg’s still far from perfect, of course. But the coverage a year later showed that Bowman and the other leaders who gathered that day had been busy trying to live up to their vow, tackling the issues head on, rather than shooting the messenger.

Perhaps that’s the kind of anniversary that’s really worth marking.