'I want to be a comedian'

“Knock knock,” Maaz Hassan says to his dad, Ali, as he fidgets on a couch in the living room of their west Toronto home.

Ali erupts in a fit of laughter before belting, “That’s a good one!”

It’s one in Maaz’s impressive catalogue of knock-knock jokes. “I want to be a comedian,” he explains.

“Bad choice, buddy,” his dad shoots back—a classic case of do-as-I-say-not-as-I-do. Ali is a stand-up comic, actor and former funny man on CBC’s George Stroumboulopoulos Tonight. Maaz is, in addition to being Ali’s third of four children, a great source of stage material. Five years ago, Ali went from single and childless to married with three kids in the course of 18 months. (His wife had two children from a previous marriage.) His comedy career was never the same.

FROM THE ARCHIVES: In the 1993 article “Wise Guys,” Lorne Michaels weighs in on the state of Canadian comedy.

“I originally got scared into doing cleaner comedy,” he says, telling the story of the day his stepdaughter asked how to spell his last name. When he asked why, she told him she was looking him up online. “At that time, I didn’t know what of mine would be on YouTube,” Ali recalls, “but I knew it couldn’t be great.”

Eschewing crude humour for family-friendly laughs wasn’t a tough transition, though. “The stuff that was coming out of these kids’ mouths on a regular basis, I was like, ‘I have to take this to stage,’” Ali says. “I just basically sit back and listen and the comedy writes itself. It’s almost cheating.”

Maaz features prominently in Ali’s comedy routine. “From his crib, he would just yell: ‘Bobo! Bobo!’ ” Ali explains. “There wasn’t even a reason. People would be like, ‘Is that cultural?’ No, it’s just disrespectful!” 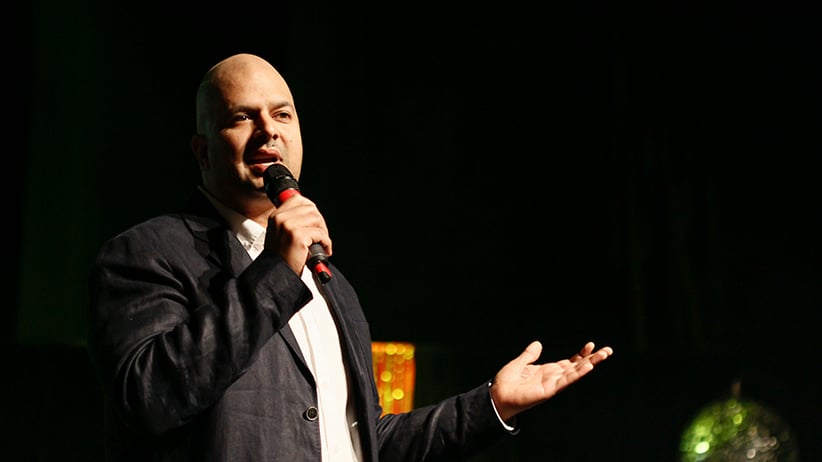 Comedian Hassan moved toward cleaner material when he got married and became a father of three. (Sergio Mendoza/Ali Hassan)

Maaz began developing a funny bone of his own around the time he first watched Nacho Libre, the 2006 comedy that casts Jack Black as a Mexican priest-cum-luchador. “That was the first movie he actually watched from start to finish,” Ali says. “He was mesmerized.” Script references, and wrestling stunts, have been a staple in the household ever since. It reminds Ali of Kato, the servant from The Pink Panther trained to keep Inspector Clouseau on his toes. “That’s basically what I felt like every time I came home,” he quips. “I’d hear, ‘Ahhh!’ And he’d come barrelling into my groin.”

Maaz started school last year, and Ali intends to keep him there for as long as he can. Maaz’s grandparents are insistent that he make it to university one day. “Then, after that,” Ali says, “if he still wants to be a comedian, what can we do?” — Luc Rinaldi