The park and the Lions Club are permanently off limits, leaving residents to wonder how they get out of this mess 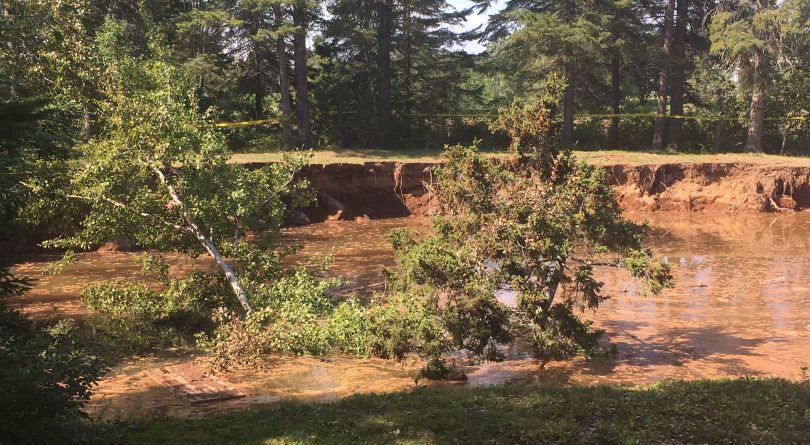 The Oxford sinkhole, as seen one year ago. It has since rendered the local Lions Club unusable. (CP/Rob Roberts)

The Town of Oxford, N.S., got the bad news ahead of its biggest celebration of the year.

The town, which bills itself as the “Wild Blueberry Capital of Canada,” heard it has permanently lost the use of an entire park, along with a heavily used service club venue, to its now–infamous sinkhole. The news left a pall on the town amid the annual Wild Blueberry Harvest Festival where revellers can pick berries, sample jams and fork into desserts while the usual run of tourists take selfies with Oxley, the giant blueberry man at the entrance to town.

“That’s a big loss,” said long-time Oxford resident Eric Mosher about losing the Lions Club building and park where he learned to swim in the adjacent lake as a kid. “It’s where people had their 60th wedding anniversary, their 90th birthday party or wedding receptions.”

The sinkhole, which has come to be its own tourist attraction, began eating up trees and swallowing dump truck-sized chunks of land last summer. It morphed into a swimming pool-sized brown pit that a recent geophysical report showed now threatens to munch into the town’s main thoroughfare.

RELATED: 12 shocking sinkholes (both big and small) from around the world

“Whether it will happen or not, whether it’s something that’s going to happen next week, next year, next century, we really don’t know,” said Rachel Jones, Town of Oxford’s chief administrative officer, referring to the risk of more sinkholes opening up. “Now that we have a benchmark of what the geology is and what the conditions are, we’ll monitor it. If we start noticing changes then we’ll know to look deeper and start talking about other types of contingencies as it relates to public infrastructure and public safety.”

The final geophysical report looked at seismic data and precise dynamics of the sinkhole to determine its risk and how big it might grow. It showed the long-term risk to the Lions Club is high. The ground is unstable around the sinkhole and may jeopardize Highway 321, the main road into the town.

“There is a high risk of potential sinkholes developing over time and impacting critical infrastructure adjacent to the site,” Dan Parker, geoscience lead for Atlantic Canada, wrote in his report.

A plethora of water-soluble gypsum and salt in the soil in and around Cumberland County is responsible for the sinkhole disaster, a vivid illustration of the enigmatic geology of this area of northern Nova Scotia.

Residents of the town are concerned, especially after their property assessments plummeted in the last year, said Jones, adding that the sinkhole was a contributing factor. Still, she noted, the remainder of the town is situated on a different type of bedrock. “It’s not like we’re going to disappear into one large sinkhole and cease to exist,” she said. “Overall, this type of news has an impact. We just pull it together and trudge forward.”

Like most small towns, Oxford has lost more than it’s gained in recent years, and the sinkhole has dealt another blow.

The land where it formed belongs to the Lions Club. It was the site of a popular park, playground and recreational facility for the town’s 1,190 residents. Now the building is worth just $500, and the club has lost its ability to raise funds through renting out the centre and holding its own events. The Lions are now trying to figure out their next step, which could include relocating the building with the town’s help.

The earliest signs of the sinkhole appeared last summer during a wedding reception at the Lions Club. It started as a hole about the size of a porta potty and within weeks, expanded to huge crater that now measures 30 metres by 40 metres.

Carloads of curious onlookers began turning up in town, clogging roadways and causing fender benders as pedestrians darted across the road for a gander. It was such an attraction (and danger) that the town erected a permanent chain link fence along the edge of the property with a no trespassing sign to keep people out.

The added tourism was about the only silver lining. For Mosher, who owns a gift shop that sells blueberry mugs, preserves and snow globes featuring Oxley, the sinkhole has brought more business. “I get bus tours with people wondering if there were tours of it,” he said. “I had my best year in the 45-year history of the business.”