The Alberta NDP vs. budget reality

What happens when the NDP’s plans to transform Alberta run up against ugly budget realities? 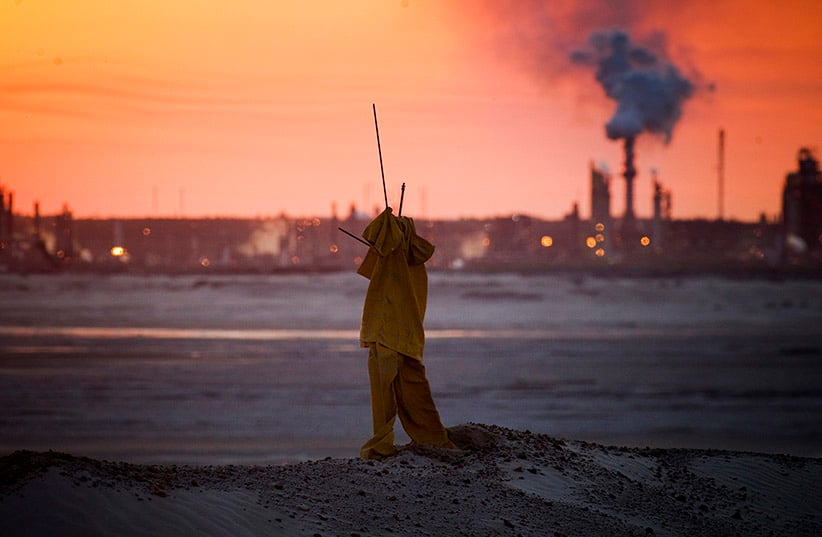 A scarecrow near the Syncrude Canada Ltd. upgrader plant of the company’s mine in the Athabasca Oil Sands near Fort McMurray, Alberta.  (Ben Nelms/Bloomberg/Getty Images)

Last month, Alberta Premier Rachel Notley and her team drew 600 people to a $250-a-head fundraiser in Calgary, a city where “dozens” used to be a respectable turnout for her party’s events. The crowd was dotted with business lobbyists—read: former Tory government aides—who wished more elected members wore name tags. They played an increasingly popular game at Alberta functions: is that a government MLA, or just some guy in an ill-fitting suit?

Notley’s speech drew healthy applause, even if she seemed unconvinced she deserved it all. “Our party, the New Democratic Party of Alberta, has taken on an enormous responsibility in stepping up to government in these times, and you know what? I think so far we’re not doing that bad a job,” the premier said. Cue the claps and hoots. “Okay. It’s arguable I might have asked for that applause just a little bit,” she added.

There’s reason for Notley to feel unworthy of such acclaim. In fact, she downgraded her assessment to “not bad” from the “pretty good” her speechwriter had scripted. Her government in October dropped a $6.1-billion budget deficit, and the first full-year NDP fiscal plan in spring may not be any prettier. That’s predominantly thanks to the ugliest oil price rout in a generation, which also prompted tens of thousands of Alberta layoffs and likely more throughout 2016. It’s hard to blame the recession on the NDP’s would-have-done-them-anyway moves like hiking corporate taxes, reviewing oil and gas royalties and the massive overhaul of emissions rules. It’s easier to say that a combination of them hasn’t helped with business confidence in the young government.

The NDP’s own reformist agenda will add to pressures in 2016. It will enact changes recommended by a barrage of reviews on energy royalties, the mental health system, agencies and boards, payday loans and more. The government has pledged to, somehow, implement the United Nations Declaration on Indigenous Rights, and budgeted $4 million for it—that’s mostly just to facilitate discussions with First Nations and Metis on how to accomplish this potentially sprawling task.

Having announced the climate policy shakeup, Notley must design this carbon tax and offsetting rebates, along with ways to wean Alberta off coal power by 2030 without Ontario-style price shocks. She’ll need careful, ongoing maintenance of the tentative new alliance of environmentalists and some energy executives—and, gosh, wouldn’t a new pipeline to somewhere be nice?

Ambitious social justice agendas never come cheap, which will make budgeting the New Democrats’ biggest headache and vulnerability. As oil prices continued to slump, they had to slash former premier Jim Prentice’s revenue forecast while proudly reversing his ending cuts. Unless oil prices leap back to a year-long average of US$61 per barrel (it’s currently below $40) to square with the NDP’s budget figures, the government will have to learn how budgetary scissors work. While Alberta’s almost 40-year-old Heritage Fund remains intact, a contingency account started in 2003 as a budget buffer will run empty next fiscal year. For every dollar the oil price falls short of what the government hoped, $170 million more melts from Alberta coffers.

Notley and her finance minister, Joe Ceci, keep using the word “prudent” in speeches but haven’t shown signs they know how to use it in action. Not when they depict the right-wing Wildrose Party’s approach in these binary terms: “But unlike those friends of ours in the official Opposition, we also know you can’t make the price of oil go up by laying off teachers and nurses,” Notley said at that November fundraiser. The hopeful budget already commits Ceci to trim $550 million from “lower priority programs,” and even that may prove stressful for the NDP.

It took Standard and Poor’s credit rating downgrade in December to prompt a shift in tone. Along with end of the province’s triple-A rating after 14 years came the agency’s warning of more cuts to come if conditions don’t improve and the government continues to show “inability” to control spending. Days later, Ceci said his cabinet will discuss removing some spending promises from spring’s budget, and said it’s a “dire” situation. “Lots of things have to be on the table because of the financial challenges that we have,” the finance minister told reporters.

New Democrats won May’s surprise majority by sweeping the Edmonton area and making inroads in Calgary and the rural north. A badly bungled farm bill, however, hurt them dearly in the countryside, and continued economic pain may wound the leader further in Calgary.

Notley has until spring 2019 before voters must judge whether she’s done a “pretty good” or “not bad” job, or worse. It’s become exceedingly hard lately to place bets on Alberta politics; 3½ years ago, Tory premier Alison Redford had just won a stunner over the Wildrose’s Danielle Smith, and now both are in political exile. It’s even harder to predict what shape the opposition will take, as Wildrose bids to consolidate Alberta’s right wing, while the third-place PCs head into 2016 deep in debt and with no clear plans for its leadership contest or anybody leaping to pursue that once-shiny prize. The year ahead will help clarify whether Alberta can still bleed Notley orange, or if it’s simply bleeding.