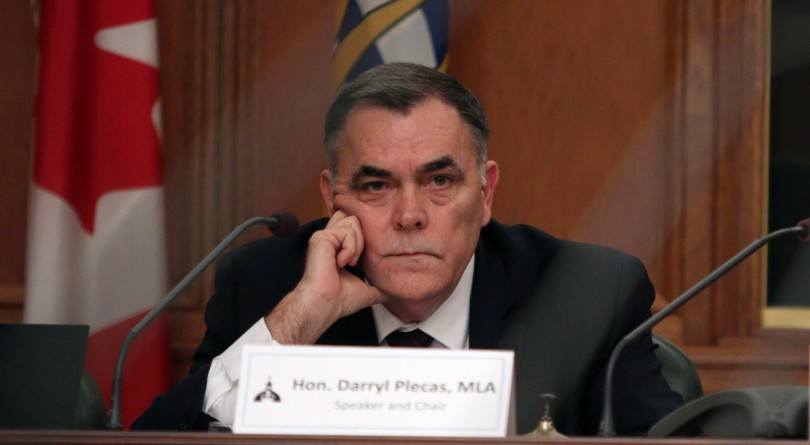 The Speaker of the British Columbia legislature alleges in a report that the clerk and sergeant-at-arms engaged in flagrant overspending, questionable expenses and inappropriate payouts of cash “in the range of a million dollars.”

Darryl Plecas’s report was released Monday after it was reviewed by members of the Legislative Assembly Management Committee.

The report says that based on what he had seen and heard, he believed there was a real possibility crimes may have been committed and he felt obligated to contact the RCMP.

Sergeant-at-arms Gary Lenz and clerk of the house Craig James were suspended and escorted out of the legislature in November without any explanation.

The RCMP later said it was investigating allegations against the men and that two special prosecutors had been appointed to assist in the investigation.

“These matters are not simply bare allegations,” Plecas says in the report, adding they were based on his personal observations and interviews with others.

The committee voted to release the report Monday and agreed to launch an audit of legislature financial issues, conduct a workplace review and submit that report to an auditor from outside of B.C.

Plecas said regardless of what happens in the criminal context, the legislature needs to review and consider the matters to determine if the conduct is inconsistent with the duties of those involved.

“British Columbia taxpayers deserve a legislative assembly that is accountable, transparent, efficient, fiscally responsible, and fair to its employees.”

None of the allegations have been proven, and Lenz and James issued a statement Monday in which they predicted the claims would be shown to be “completely false and untrue.” Their statement described the release of the report as “a public humiliation,” and criticized the committee for ensuring the two men “be given an opportunity to comment before these harmful allegations were published.”

The report says the concerns in releasing the information involve whether making the allegations public would be unfair to the employees or problematic for the police investigation.

Plecas said last December he would resign his position as Speaker if the public is not outraged over his unspecified findings at the legislature.

He later said he welcomed an audit of the legislature’s books, adding if the results did not spark public outrage to the point people would want to “throw up,” he would quit along with his special adviser Alan Mullen.

Lenz and James denied any wrongdoing at a news conference in Vancouver last November.

They said they were humiliated after being placed on administrative leave and didn’t know what they’d done to provoke a police investigation but they want their jobs and their reputations back.

Lenz said he was shocked when he learned he was being investigated and has had trouble sleeping and eating and James said no one had informed him of what he is alleged to have done.

The Opposition Liberals had questioned the Speaker’s handling of the suspensions, but Premier John Horgan expressed confidence in the Speaker.

On Monday, Solicitor General Mike Farnworth said he was shocked and saddened to read the report. Farnworth is one of four New Democrats on the eight-member committee.

He said the Plecas report makes a strong case for the Speaker’s concerns.

“When you read that report and all the documentation that is with it, I don’t see how you can do anything other than accept much of what is in that report,” said Farnworth.

Liberal House Leader Mary Polak, one of two Liberals on the committee, said she has been waiting since last year for Plecas to make his concerns public.

“We’re pleased to see the public finally has some information to look at,” she said. “It’s very concerning what we see in terms of the allegations around expenditures.”

“The report released today makes serious and shocking claims that have significant implications for public trust in our democratic institutions,” he said in a statement.