The beat cop who lends an ear to criminals

'As police, we are not dealing with good or bad people. We’re just dealing with people, many in a bad situation, with horrendous circumstances in their life.' 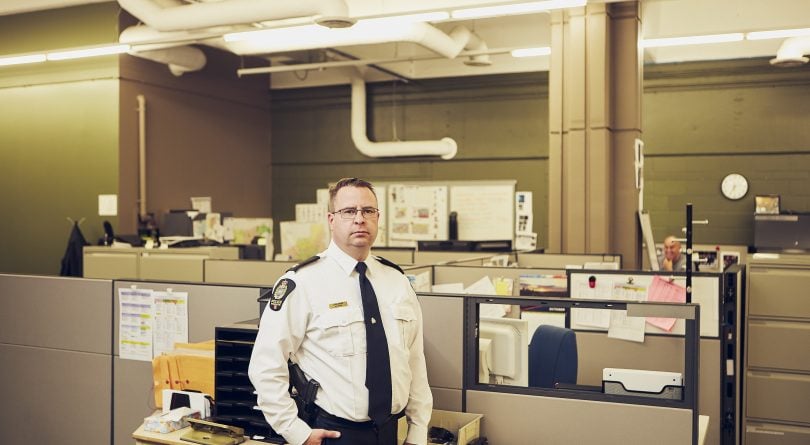 Teresa Strong remembers sitting in her jail cell in the middle of a five-year sentence for robbery when, on a whim, she asked to make a call—to a police officer. Thirteen years earlier, when Strong was on the streets and tied up in gangs and the sex trade, an officer named Dan Jones had stopped to hear her story.

“Dan told me that if I wanted to change to give him a call,” says Strong. “All those years later, his voice came into my head and he has literally been in my life since. I’ve been clean for 14 years. It’s had a huge impact having him there for me.”

A 21-year veteran of the Edmonton Police Service, Insp. Dan Jones is an anomaly. He’s not just a cop; he’s an anthropologist trying to debunk the idea that bad guys are always bad. Canadian prisons are closed to most outsiders, but Jones is part of an academic research team conducting the largest ever qualitative study within provincial prisons.

On any given day, 118,000 adults are caught in the Canadian correctional system. That’s about the population of Peterborough, Ont., or Lethbridge, Alta. As part of a larger set of 800 interviews, Jones has analyzed the experiences of 111 male offenders. He’s found that the vast majority—88 per cent—were victims of violent, property or sexual offences before their first arrest. That means most offenders are also victims. Knowing this, Jones says, could help the justice system prioritize healing and rehabilitation.

Sandra Bucerius, an associate professor of sociology at the University of Alberta in Edmonton, co-leads the larger study within which Jones’s research sits. She underscores how groundbreaking his findings are, not only in Canada but also internationally. “There is almost no research on the victim-offender overlap in a prison context,” Bucerius says. “And in Canada, there is none. Nothing. That is simply an access issue because most researchers haven’t had access to prisons.”

Jones came to his research after two decades working the street as a beat cop. One case reshaped his approach. A youth worker was charged with sexual assault, and when the victims were tracked down, five of the 13 were awaiting trial in the remand centre.

“I felt something was wrong,” Jones says. “Victimization is a predictor of crime. As police, we are not dealing with good or bad people. We’re just dealing with people, many in a bad situation, with horrendous circumstances in their life. If we had the same experiences, we might be in the same position, or worse.”

Jones is the only one of Edmonton’s 1,800 police officers pursuing a Ph.D. in criminology. It’s all the more unusual given that Jones came to policing without an undergraduate degree. He skipped straight to a master’s degree, winning a place at Cambridge University’s Institute of Criminology in 2016 based on the depth of his real-world experience. (Bucerius wrote Jones’s recommendation letter.)

Jones’s use of stories and not just numbers as data runs against the research grain. Modern policing uses a system called CompStat, featured in TV shows such as The Wire, which relies on quantitative data, not on qualitative data drawn from interviews and observations in the places where people and police interact. Jones’s kind of research is called ethnography.

“He is one of the only people interested in ethnographic research, and who even knows what ethnographic means?” says Celene Lemire, who is in charge of stakeholder relations for Edmonton Police. “If you spend a lot of time dealing with the same people over and over, like many police do, it can be frustrating. Of course, no one wakes up in the morning and chooses to live as an addict. There is motivation behind their behaviour, and Dan is often helping us recognize this perspective.”

The researchers found that within the first two minutes of sitting down with an offender, many would openly share stories about being raped, beaten up or left for child welfare. The team recorded 10,281 instances of victimization (from the group of 111 men), less than one per cent of which had been reported to police.

Strong, who now counsels people in jail, remembers how tough it was to build a trusting enough relationship with police to ask for and accept help. “People do things based on what they know, and it’s this cycle. It’s rare to have cops who know that and are non-judgmental.”

With both the stories and numbers in hand, Jones pushed for victim services to operate inside Edmonton’s remand centre. Now people waiting for their day in court can be connected to practical and therapeutic supports. Although the experiment is in its infancy, Darlene Adams, who heads Victim Services for Edmonton Police, sees benefits. “We’ve been in the remand centre for two months, assisting the most vulnerable victims,” Adams says. “We’re listening and we’re staying with people as they get closer to court, working with outside agencies to make sure they get the counselling and housing they need.” Not all Victim Services staff members and volunteers, however, are “comfortable with the changes we’re making,” Adams says.

Jones summarizes the discontent this way: “Some people get mad and say they don’t believe the research. Others say it’s so sad. They can’t believe they haven’t seen it before and feel terrible they hadn’t opened their eyes to it.”

“We are part of the system that gives people a bad label,” Jones says. “And until someone tells them that they are better than the label, they continue living up to that.”