It takes a village to safeguard an evacuated Fort McMurray

We tally all of the firefighters, police officers, mental health workers, insurance adjusters and the rest of a small army of people in Fort McMurray

There is a small army of people swarming around a city whose more than 80,000 residents are barred from entry.

The checkpoint is still set up several kilometres from Fort McMurray where about one-tenth of the city’s structures were destroyed by wildfire. But to prepare Fort McMurray for re-entry—at a still-undisclosed date—several hundred recovery workers and other employees, many of them outsiders, must secure the smouldering neighbourhoods, restore critical services and assess the damage.

This is the new temporary population of Fort McMurray, staying mostly at oil sands work camps that surround the city: 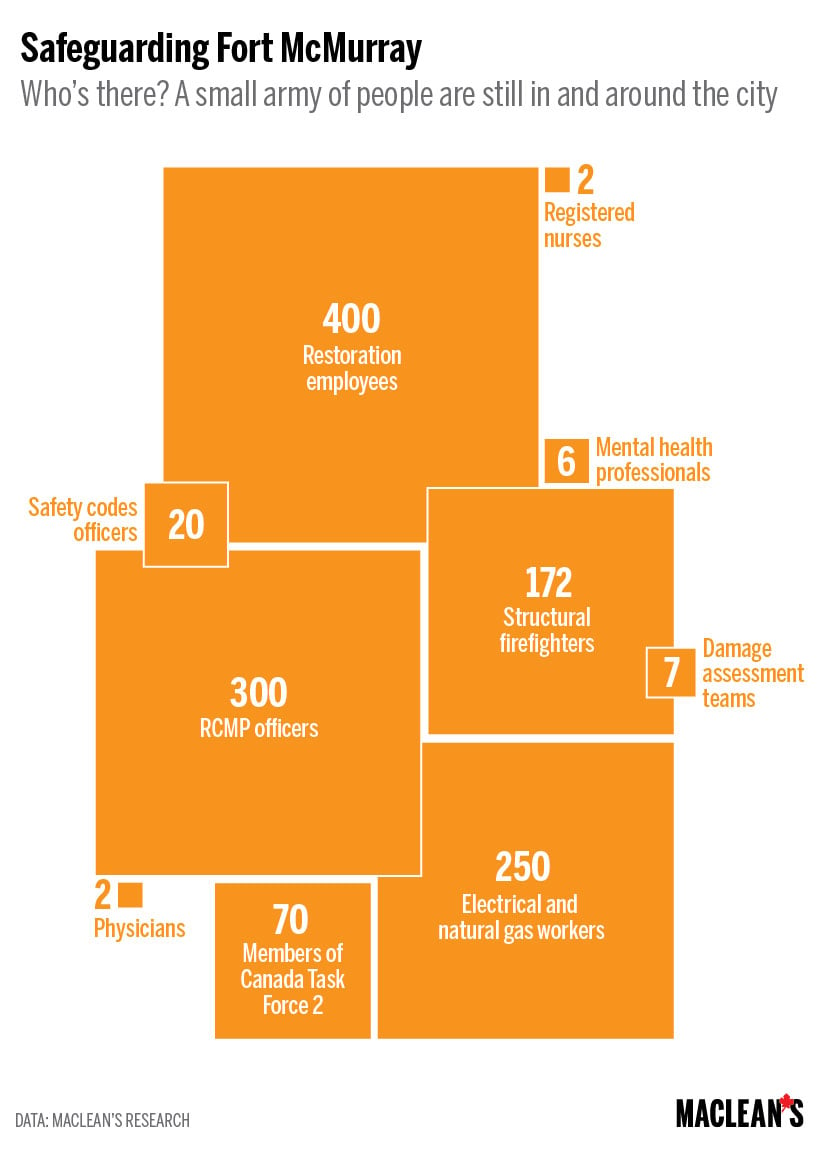 172 structural firefighters from around Alberta—assessing hot-spots in smouldering foundations of basements, tamping down brush fires or anything that’s still smoking within urban limits, or putting out flare-ups that erupt from the ground (including one on Macdonald Island, which houses the complex that serves as the base for firefighters). This is on top of some 130 local firefighters, and the 850-strong force tackling the wildfire that is nearing 250,000 hectares in size, though the scorched perimeter of Fort Mac actually serves as a guard against further wildfire infiltration.

70 members of Canada Task Force 2 — an Alberta-based disaster response team that specializes in urban search and rescue, from structural engineers to paramedics. This was a go-to team for assisting with the southern Alberta floods in 2013 as well.

300 RCMP officers from around the province—providing checkpoint control, street and aerial patrols, and security

400 restoration employees devoted to the hospital. The city’s main health centre was protected from flames, but suffered water and smoke damage, and a hospital needs to be sterile. They arrive Friday, and will focus on the emergency department, diagnostic imagery, labs and the heating and ventilation system, Alberta Emergency Management Agency director Scott Long said Thursday.

6 mental health professionals—the destroyed neighbourhoods of Fort Mac are harrowing for anyone, let alone the emergency or local staff who lost homes in the fire

250 electrical and natural gas workers—from the company Atco, they’re securing and restoring the electrical system and natural gas heating network for a city where they had to shut much of that down to limit fire risk. By mid-week, downtown Fort McMurray was powered up again, Long said. 300 more Atco workers are arriving Friday, he said.

20 safety codes officer from Alberta Municipal Affairs and the cities of Calgary and Edmonton—to ensure buildings are structurally sound, assisting the local staff for Fort McMurray

Plus unspecified numbers of…

Insurance adjusters from more than a dozen companies with business and home insurance polices in town. They’re not entering properties, Long said.

SPCA and Humane Society officers: from the provincial and Calgary animal protection groups. They’ve already rescued hundreds of Fort McMurray pets, and have begun reuniting them with families.

Municipal staff: who are bringing the city’s potable water system on, running the Regional Municipality of Wood Buffalo social media accounts, doing building safety assessments and helping provincial and federal officials staff the emergency operations centre out of a fire hall near the still-intact airport.

Support services: to provide potable water, food and other necessities to this new village.

0 Darby Allens — The region’s fire chief, the most prominent hero to emerge from this crisis, handed off responsibility for the emergency management now that the city is in recovery mode. At a news conference at the checkpoint south of Fort McMurray, Allen told reporters he’ll take about a week off in Edmonton, reunite with his wife and have some beer.