Deep-fried coke and jelly beans are things of the past. Make way for peanut butter bacon balls. 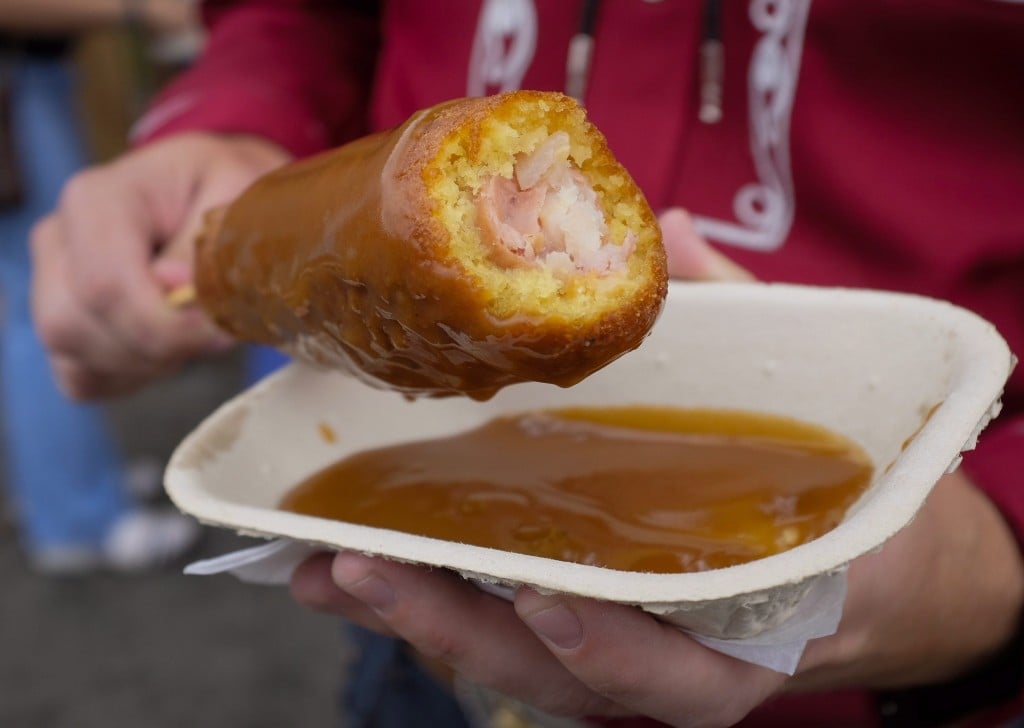 A Poutine Corn Dog at the Calgary Stampede in Calgary, Saturday, July 9, 2016. THE CANADIAN PRESS/Jeff McIntosh

CALGARY – If you’re entering the Garden of Earthly Delights that is the food concessions at the Calgary Stampede, it’s better to be a fan of the classics.

“We’ve had foods come and go,” said James Radke, midway operations manager for the Calgary Stampede. “Deep-fried Coke — gone. Deep-fried jelly beans — gone. Some foods will be a fad for one year. The scorpions on pizza was a fad for two years.

“Some foods will just disappear.”

You can get still get your hands on something exotic each year.

The new artery-hardening offerings in 2016 include the big pickle dog, a hot dog inserted into a hollowed-out pickle and coated in corn batter, or PB dumbbells, peanut butter bacon balls wrapped and deep fried in corn batter and then topped with chocolate sauce and bacon bits.

There’s also a poutine corn dog, a hot dog infused with hash browns and pieces of cheese coated in corn batter and drizzled with gravy.

“It’s a really unique flavour,” said Riley Peters as he kept an eye on a dog sizzling in the deep fryer.

But, Radke said, the real favourites are the mainstays — corn dogs, mini-donuts, candy apples and pretty much anything on you can put on a stick.

“I always stick with the bratwurst on a bun,” he said.

“We spend our whole year worrying about our calories. Ten days of Stampede is when you have fun. It’s when you stop thinking, stop worrying and just have a good time.”

The big pickle dog appeared to be a hit on the Stampede’s opening night.

“They are extremely popular. It’s actually crazy how many people get them,” said recent high school graduate Jenessa Achal during her shift inside Big Coco’s Corndog’s booth.

“I decided to just forget about the stick and just eat it with my hands,” she said. “It’s going to be my meal of the day, probably.”

But she said over indulging for the whole 10 days is not a wise idea.

“People take days and days off work and go from pancake breakfasts to barbecue lunches to events in the evening. So those days can really derail a person’s nutrition very quickly,” she said.

“Those peanut butter bacon balls? I can’t imagine that really tasting that good and to me deep fried peanut butter with bacon and chocolate sauce are just empty calories.

“You’d probably have to do a solid three hours of dancing at Nashville North. You’d have to walk around the grounds for a good five hours to burn off all those extra calories.”