The case for keeping 'Langevin Block'

Peter Shawn Taylor on the danger of judging historical figures, from Langevin to Cornwallis, on individual acts 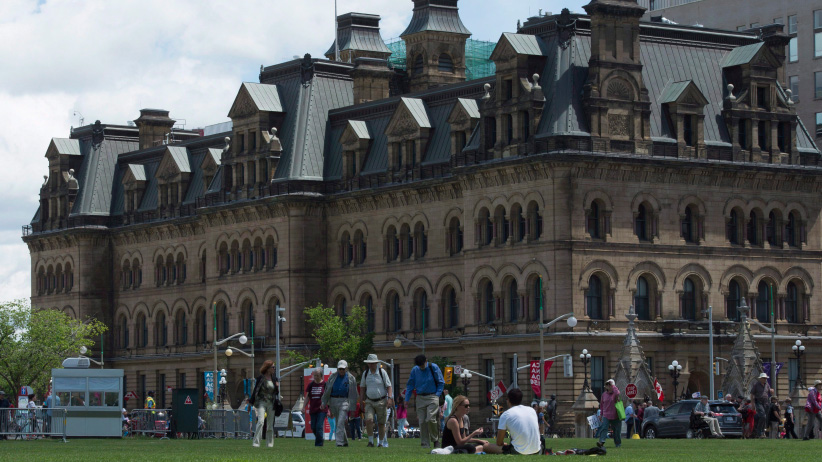 People relax on the front lawn of the Parliament buildings near Langevin Block in Ottawa, Wednesday June 21, 2017. The federal government is renaming the Langevin Block building, which sits across from Parliament Hill, out of respect for Indigenous Peoples. (Adrian Wyld/CP)

As we mark the 150th anniversary of Confederation, Canadian history is in the midst of an existential crisis. From coast to coast the physical presence of many once-celebrated historical figures is being scrubbed from our midst.

Last week, in honour of the newly renamed National Indigenous Peoples Day, Prime Minister Justin Trudeau announced that the Langevin Block, which houses the Prime Minister’s Office, will be officially renamed in order to rid it of “the name of Sir Hector-Louis Langevin—an individual associated with the residential school system” and the federal government’s now-discredited plans to assimilate the Indigenous population.

Halifax has seen repeated demands that a prominent statue of city founder Edward Cornwallis be removed from public display because he declared a bounty on Mi’kmaq scalps in 1749. His name has already been removed from a local school.

Prince Edward Island has heard similar calls for Parks Canada to rename the national historic site Port-la-Joye-Fort Amherst to eradicate the legacy of British military commander Sir Jeffery Amherst, given his reputation as the mastermind behind a scheme to give smallpox-laced blankets to Indigenous foes.

And the Law Society of British Columbia recently hoisted a statute of Sir Matthew Baillie Begbie, the first chief justice of British Columbia, out of the lobby of its building because the “presence of the statue is offensive” to Indigenous peoples. Begbie is known as the “hanging judge” for sentencing six Tsilhqot’in chiefs to death in 1864.

The vast preponderance of Canada’s historical heroes, it seems, were genocidal maniacs undeserving of statues erected or parks, forts, cities or streets named in their honour. As the evidence of misdeeds and character flaws pile up, should we simply wipe the slate clean of all references to our past?

Then again, maybe we shouldn’t be so quick to turn our backs on our former selves.

It is axiomatic of history that it exists in context. Historical figures are products of their times, as well as figures astride pedestals in parks. They had full and complicated lives that cannot be adequately understood from a single quotation or act. And with this in mind, let’s look again at the charges against Langevin.

As the minister of public works in Sir John A. Macdonald’s government, Langevin formalized the residential school system in Canada. Further evidence of his unsuitability for current recognition comes from the Truth and Reconciliation Commission report that makes repeated mention of a speech he gave in 1883: “If you wish to educate the native children, you must separate them from the parents. If you leave them in the family they may know how to read and write but they still remain savages.”

Taken on its own, Langevin’s quotation is a devastating indictment to modern ears. But what if we let the tape roll a bit longer? Later in that same speech, for example, Langevin said it was his intention to give every native child who graduates from residential school a free homestead. And in response to Langevin, Edward Blake, the leader of the Liberal party of the day, not only used words to describe Indigenous men and women that would be considered horrific today, he also complained that Ottawa’s plan was overly generous. The Liberal party of the day wanted to spend far less on the native file.

Extreme narrow focus on a few sentences of one speech may provide damning evidence of Langevin’s unfitness for present-day memorialization. But in the context of his time, Langevin actually stands among the more enlightened representatives of the federal government. As for the accusation that Langevin believed in assimilation of the Indigenous community—a concept now properly and universally considered abhorrent—he is guilty as charged.

But assimilation was conventional wisdom among all elite thinkers of his era. If statements in support of it are to be considered sufficient reason for removal from the historical record, then every politician of note in Canada prior to the 21st century must eventually be struck from the record—from Macdonald to Sir Wilfrid Laurier on down. Even Pierre Trudeau, often considered the father of an inclusive, multicultural Canada, was a confirmed assimilationist. His 1969 White Paper on “Indian Policy” planned to eliminate Indigenous status entirely. When such a plan was firmly rejected by the Indigenous community, Trudeau replied bitterly, “We’ll keep them in the ghetto for as long as they want.” Is the legacy of Trudeau senior next on the list for erasure?

And entirely ignored within the current debate over Langevin and the residential school issue is his stature as a key Francophone Quebec federalist during the crucial pre-Confederation era, which was the reason his name ended up on a federal building in the first place. Reconciliation between French and English was once considered a great Canadian virtue. It should still count for something today.

As for Cornwallis, in 1749 he did declare a bounty of 10 British guineas for every Mi’kmaq scalp delivered to him during a colonial-era conflict known as Father Le Loutre’s War. Like Langevin’s speech on residential schools, singular attention on this one act seems sufficient to declare him unfit for present-day consumption. By any standard, scalping is an horrific act. But once again history throws up some uncomfortable facts.

Father Le Loutre’s War (1749 to 1755) was the handiwork of French Catholic priest Jean-Louis Le Loutre, who goaded local Mi’kmaq tribes into conflict with the British in hopes of reclaiming New Brunswick and Nova Scotia for the French. For added motivation, he explicitly promised to pay Mi’kmaq warriors a bounty for English scalps. And they delivered. In 1753, for example, Le Loutre was reimbursed 1,800 French livres by the colonial government in Quebec City for sums he paid to the Mi’kmaq for 18 English scalps.

The payment of scalp bounties was unsettlingly common throughout North America during the entire colonial period. It was, in fact, standing French policy to offer payments for the scalps of the English—men, women and children—as a subsidy to ensure the continued loyalty of allied Indigenous tribes. Scalp bounties in the English-speaking colonies generally only appeared when a war was on; and their value waned and fluxed depending on the public’s panic level. It thus seems unfair to use Cornwallis’s scalping proclamation as conclusive evidence against him when both sides in this ancient conflict, including those Mi’kmaq nations who today demand Cornwallis’s expulsion from the public square, were fully engaged in the repulsive tactic.

And while Amherst is widely considered to be the father of modern germ warfare for allegedly handing out smallpox-infected blankets to Indigenous foes, this is a falsehood. There is no proof he ever did such a thing. Amherst responded positively to the suggestion from a fellow officer in a letter dated July 16, 1763, but this came a month after the one and only time British troops actually stooped to such a tactic—during a native siege of Fort Pitt (near present-day Pittsburgh) on June 24, 1763.

Finally, Begbie was indeed responsible for sentencing six Indigenous leaders to hanging for their role in the killing of 20 non-natives during B.C.’s Chilcotin War. Yet condemning him into oblivion on this basis ignores his vast record of support and understanding for the province’s Indigenous communities at all other times. He was fluent in several Indigenous languages, recognized the concept of Aboriginal title in his rulings and took a strong position against racism. Begbie was perhaps the most liberal and native-friendly judge of his time. As for his controversial hanging decision, which the B.C. government recently apologized for, he had no choice. The death penalty was mandatory for murder cases. Despite all this, his own law society has removed him from the firmament.

To our great disadvantage, Canada has become obsessed with replaying a slow-motion, high-definition version of our past. Historical figures are now judged by intense focus on individual statements or actions. One ‘infraction’ at odds with current acceptable standards has become sufficient evidence for expulsion from present-day society. Yet it is reasonable, if not inevitable, to expect that every notable figure from the past has probably said or done something that will grate against modern sensibilities, particularly with respect to Indigenous relations. It is therefore only a matter of time before every statue, park and street named for an historical character in Canada is declared incompatible with the present.

But while the fraught relationship between colonial Canada and Indigenous peoples is an important component of our history, it is not its entirety. We should not allow current attention being paid to the Truth and Reconciliation Commission’s findings, necessary and disturbing as they may be, to become a mechanism that strips Canada of our most significant characters and events. Or removes the context and detail from the stories of who we are and where we came from.