The cautionary tale of the Mike Duffy trial

Editorial: Mike Duffy’s sense of entitlement knows no bounds. We can only hope public outrage serves as a caution to others. 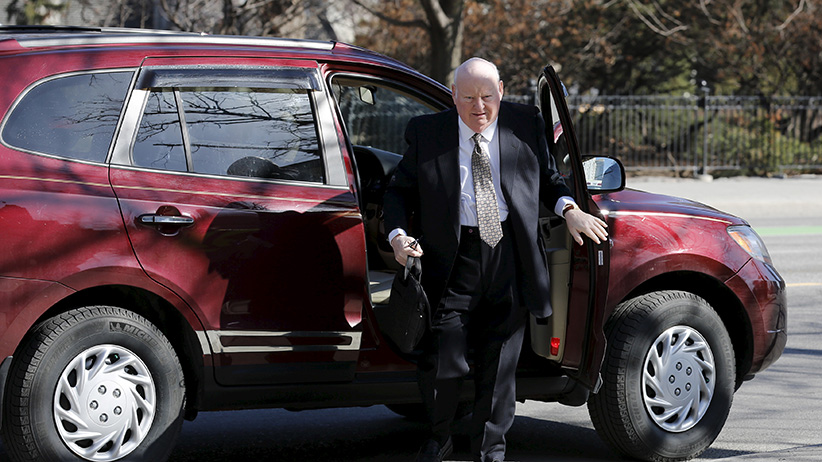 It may occupy the most prestigious and hallowed bit of real estate in the country, but on the inside, Canada’s Senate appears to operate like a backyard tree fort—no rules, no chores and no adults to tell you what to do.

As Mike Duffy’s fraud trial continues this week in Ottawa, the most troubling revelation has been the near-total absence of rules or oversight regarding travel or living expenses, office contracts or even what constitutes the proper, reimbursable work of a senator. Duffy’s overwhelming sense of entitlement appears to have been limited only by his imagination. New allegations this week include his apparent use of a phony speechwriter to facilitate photo developing and other personal expenses.

Duffy’s all-you-can-eat expense account buffet is, of course, entirely foreign to the rest of us. If the Senate operated under the sort of rules imposed on all Canadian taxpayers by the Canada Revenue Agency, for example, there’d be no need for lengthy courtroom discussions about what constitutes a principal residence, appropriate work expenses or any of the other matters to be covered in the trial. So why has it taken a scandal of such proportions to bring attention to this problem? And why has it occurred under the watch of a Prime Minister who once put so much emphasis on Senate reform?

When Stephen Harper came to power in 2006, he’d spent years deriding the Senate as a “dumping ground for the favoured cronies” of former prime minister Jean Chrétien. To emphasize his commitment to reforming the upper house, Harper vowed to appoint only elected senators. And during his first three years, he was somewhat faithful to that pledge, appointing just two senators: elected Alberta representative Bert Brown and unelected Quebec cabinet minister Michael Fortier. But during the coalition crisis in December 2008, principle was set aside in favour of political expediency; Harper set a Canadian record by appointing 18 new senators in one day. Most of those appointees were of a highly partisan nature—favoured cronies, if you will—and included such future headaches as Duffy, Pamela Wallin and Patrick Brazeau. The Supreme Court later closed the door to meaningful Senate reform by ruling that substantive changes of the sort advocated by Harper require explicit provincial consent.

The return of the unreconstructed Senate has had its advantages for Harper. Duffy and Wallin, for example, provided yeoman service to the Conservative party during the 2011 federal election. And the partisan appointments have since piled up. It was only when the current round of scandals became unbearable that action was taken to stiffen the Senate’s administrative rules. As of May 2013, senators must now provide detailed mileage logs, taxi receipts and other monthly reports in order to earn their expense-claim cheques. And the notion that they’re presumed to operate on the “honour principle” has been eliminated. “We said we would fix the Senate’s rules governing travel and expenses and we delivered,” boasted Senate Conservative Leader Marjory LeBreton in May 2013. Maybe so, but it seems a trifle late.

Perhaps if more provinces had gone along with his Senate election plans, Harper could have made good on his original promise to appoint only elected senators. Then voter scrutiny would have provided the oversight necessary to weed out bad apples and serial expense account claimers such as Duffy. Unfortunately, that never came to pass. In reverting to the traditional, highly partisan appointment process at the end of 2008, Senate reformer Harper missed a crucial opportunity to impose the sort of regulatory control that is necessary in the absence of ballot-box legitimacy. Those tough measures the Tories congratulated themselves on in 2013 should have been implemented five years earlier. As such, the Duffy scandal ought to be considered a Conservative creation.

Having lost whatever purpose or relevancy it once held within the Canadian parliamentary tradition, beset by a seemingly endless string of embarrassments and in the absence of any hope for meaningful reform (or even the pretense of honour), the only logical next step now is to begin the long and arduous process of abolishing Canada’s Senate, as previously argued in this space. As we await its slow demise, we can only hope public outrage over Duffy’s naked opportunism will act as a caution for all current and future senators. Elected or not, political representatives should conduct themselves in a manner equivalent to what is expected of the rest of the Canadian taxpaying public. If anyone is still unclear on what that means, listen up: you pay for your own haircuts and photo enlargements, you don’t claim living expenses you don’t need and you keep your hand out of the cookie jar when you think no one is looking.