Souvenir tees showing a red-braided woman doffing her bikini top have made a comeback—and she bears a striking resemblance to P.E.I.'s fictional icon 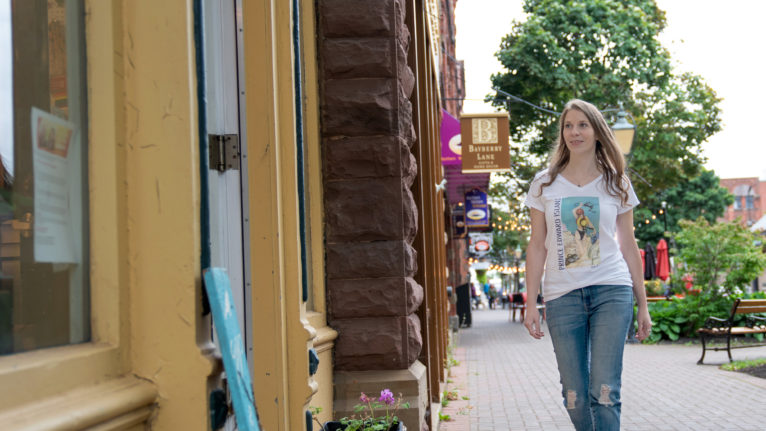 Savannah Belsher-MacLean walks towards her Charlottetown store, Green Eye Designs, where the controversial shirts are available. (Photograph by John Morris)

Anne Putnam holds up a white T-shirt, with the words “Prince Edward Island” and a graphic of a woman on a beach. The woman, shown from the back, has two red braids, a straw hat and a carpet bag. And she’s waving her black bikini top in the air.

Putnam prefers to simply call it the “Iconic T-shirt”—and if the woman pictured on it reminds you of a certain someone, Putnam says you are mistaken. Certainly, this is not Anne of Green Gables. Goodness. The very idea.

“It is a stretch to say that is definitively Anne of Green Gables,” Putnam says. “It’s more than a stretch. You can’t do that.”

Putnam and artist Dale McNevin first started selling the shirt out of a Charlottetown craft shop in 1995. Now they’re selling it again, with more than 200 orders coming in through word of mouth on Facebook after the CBC re-aired a 25-year-old radio story about it. A lot has changed in the last 25 years, but one thing has stayed the same: people either love the shirt, or they hate it.

Putnam says the shirt’s divisiveness became apparent as soon as she started selling it. “People would say, ‘That’s blasphemous!’ And I said, ‘Oh, that’s an interesting word. I didn’t know that Anne of Green Gables had been sainted.’” 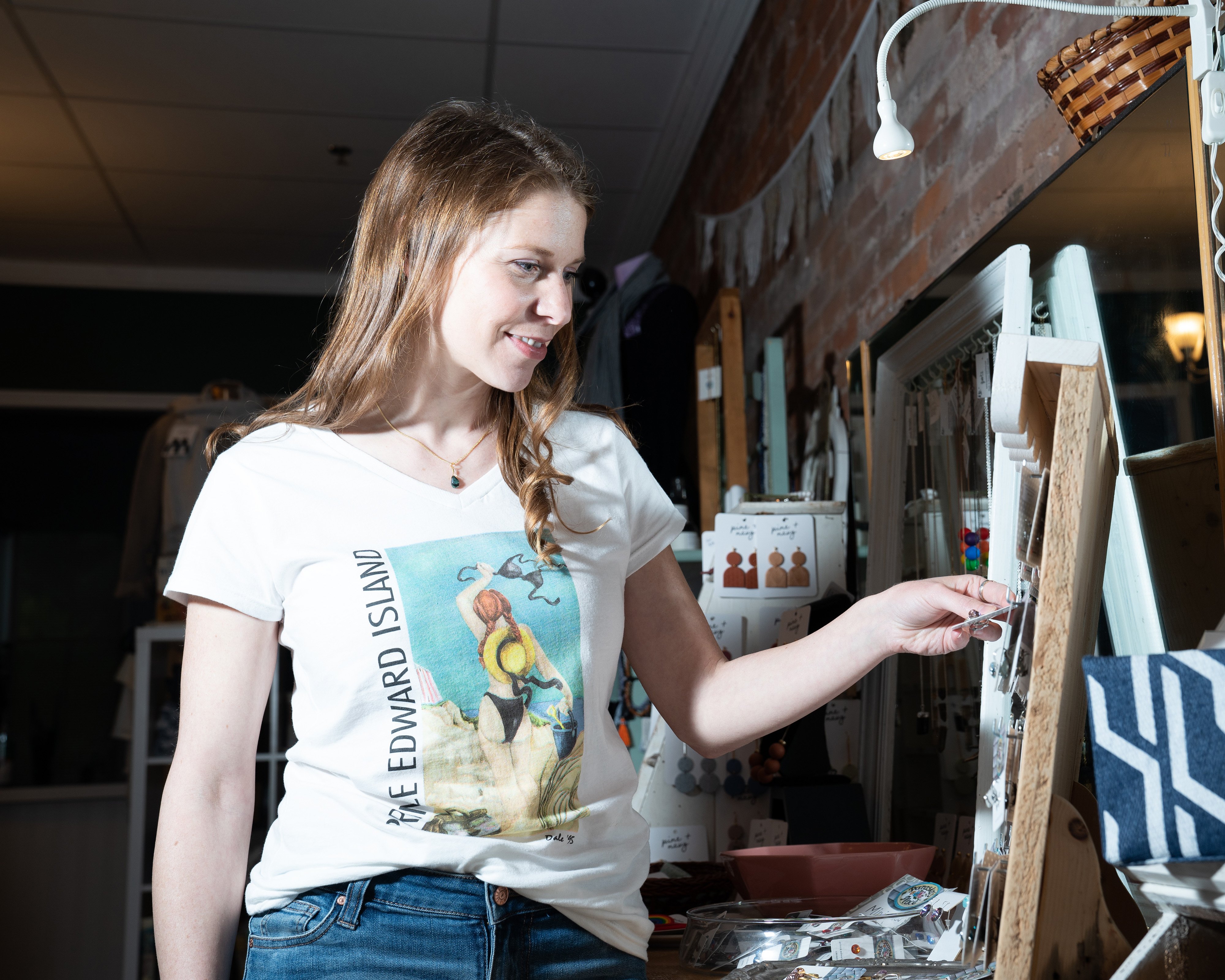 Belsher-MacLean in her store (Photograph by John Morris)

McNevin, who painted the original work of art the shirt is based on, says that, while the woman on the T-shirt is not Anne Shirley, she did intentionally set out to poke a bit of fun at the Church of Anne. The red-haired orphan was, and is, ubiquitous on the island, with local vendors capitalizing on tourists who come to see the book’s setting.

Defining what is and is not an Anne product is an open question of intellectual property law. In Canada, novels enter the public domain—which means anyone can re-publish them or make derivative works without seeking permission—50 years after the death of the author.

After the copyright on Lucy Maud Montgomery’s books expired in 1992, the province of P.E.I. and Montgomery’s heirs formed the Anne Authority to exert control over Anne products through trademarks, which don’t expire. The Anne Authority has registered marks for the names of many of the characters in the Anne of Green Gables books, images of red-haired girls with braids and the phrase “Anne of Green Gables” itself.

RELATED: So many kindred spirits! The hunt for a new Anne of Green Gables

Kate Macdonald Butler, Montgomery’s granddaughter and an Anne Authority board member, says the organization aims to protect the character’s innocent image. “It’s a wholesome story, a Canadian story. And we want to maintain the integrity of that.”

To that end, the Anne Authority has denied licence applications for products such as Anne of Green Gables shot glasses and ash trays. The organization contacted Putnam when she first started selling the T-shirt and again when she recently started re-selling it to let her know it doesn’t endorse the product and wouldn’t approve a licence for it, a moot point since Putnam says she does not intend to apply for one.

In 1995, a CBC radio interview quoted an Anne Authority lawyer as saying he believed Putnam and McNevin were illegally selling unlicensed Anne goods. Macdonald Butler now says she believes the T-shirt is not, in fact, an Anne product. “It doesn’t say Anne of Green Gables anywhere. It’s not an 11-year-old girl, it’s an older woman. So, good luck to them.”

If the Anne Authority changed its mind and decided to pursue a case against Putnam, the decision could go either way, according to Ekaterina Tsimberis, a trademark lawyer and partner at Smart & Biggar. “It’s a really interesting case. It’s also a complicated case. You can see different perspectives,” she says.

Tsimberis says a court would consider whether consumers were confused into thinking the T-shirt was licensed or produced by the Anne Authority. While Putnam and McNevin insist the woman on the T-shirt isn’t Anne, the shirt’s appeal comes from the fact it reminds people of her. A court would likely consider whether the image of a red-haired woman swinging her bikini top in the air affected the value and reputation of the organization’s trademarks, Tsimberis says.

Putnam says she understands why the Anne Authority exists and agrees it’s for the best that Anne’s image not be used to sell beer steins and lighters. She doesn’t think the T-shirt belongs in the same category, however. Anne, after all, is an enduring character precisely because of her mischievousness, non-conformity and propensity for getting into trouble.

Putnam says some people seem to lose sight of the fact Anne is fictional—and therefore does not actually have a reputation to protect. “There are some people who forget that Anne was not a real person,” she says. “That’s the point. You’ve got to take this a little less seriously.”

Thanks to COVID-19, people are desperate for an excuse to take things a little less seriously. Putnam says she thinks one reason sales of the shirt are taking off again is that it’s a bit of comforting nostalgia that has nothing to do with the pandemic.

And if the T-shirt offends you? Count yourself lucky, McNevin says: “If that’s the worst thing happening in your life this year, your life’s pretty good.” Blasphemy or not, God and P.E.I. currently have more important things to worry about than a woman taking her top off on a beach—uncanny resemblance to a certain someone or not.