The cherub who took the stand, smiled, and delivered a bad day 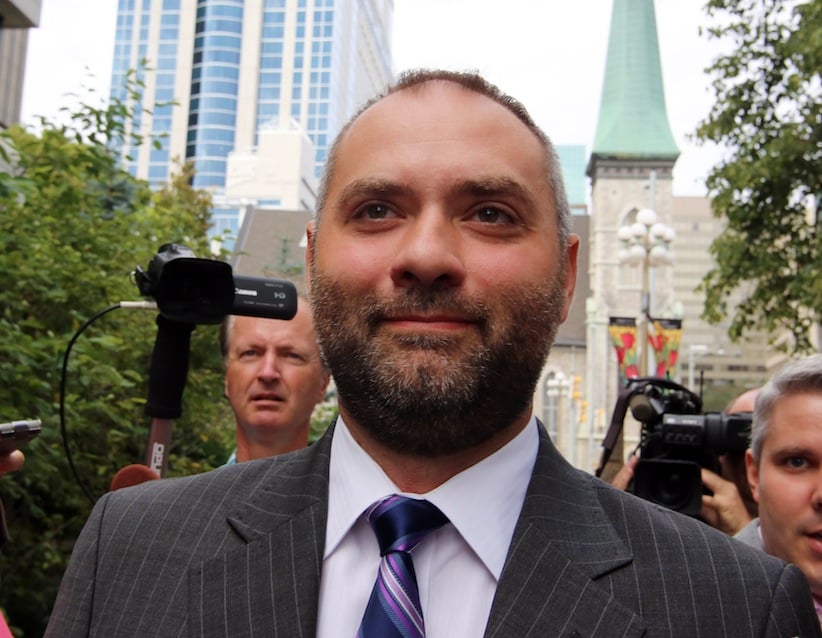 There is a category of person for whom sitting in the witness box fielding questions is a form of ecstasy. Nigel Wright, the last witness to testify in Courtroom 33, wasn’t one of those; indeed, for him, it was a torture. But there’s no doubt that Benjamin Perrin, once the in-house counsel for the PMO, really really is such a person—and for him today was bliss.

For former and current members of the PMO, however—mostly Wright and Ray Novak, Wright’s replacement as Stephen Harper’s chief of staff—today was just plain awful.

Nor was it great for the lawyers attempting to prosecute Sen. Mike Duffy, charged with 31 counts of fraud, breach of trust and bribery here in Ottawa’s Elgin Street courthouse.

It wasn’t just that Perrin reiterated a story that’s already made him front-page news this week—about how Novak knew Wright was personally paying for Duffy’s $90,000 in disputed housing expenses, putting Harper’s closest aide on the inside of those shenanigans.

Defence lawyer Donald Bayne slid that little tidbit into Wright’s testimony on Tuesday, when he read aloud from a transcript of Perrin’s RCMP statement.

No, it was likely a bad day for the Crown because Perrin seemed to go out of his way to weaken the credibility of the Crown’s star witness: Nigel Wright.

Such testimony tends to reinforce Bayne’s suggestion that Wright improperly sought to influence Deloitte—never more so than when he asked Sen. Irving Gerstein to approach a high-level Deloitte contact and, as PMO emails introduced in this trial seem to make plain, get the firm’s auditors to see things Wright’s way.

Bayne has suggested Duffy wanted to argue his case before those auditors, and that scheming PMO insiders may have robbed him of that chance.

So of course Bayne was all attention and broad smiles today as the Crown led an examination of Perrin interrupted here and there by yet another anecdote.

Perrin wears a beard, likely because if he did not he would be mistaken for a cherub.

Still in his mid-30s, he has the curriculum vitae of an older man, with two law degrees, a clerkship at the Supreme Court of Canada, and now a tenured position as a prof with the University of British Columbia’s Peter A. Allard School of Law. From April 2012 to March 2013 Perrin was also a policy adviser and in-house counsel with the PMO.

Part of the fun of listening to his testimony involved hearing what work in that office entailed. Perrin described a “firehose of email”—tens of thousands of them—and a “24-hour operation” that saw him preparing a half a dozen memos for the PM a day.

He received rulings from Harper on that work first as “a return”—a handwritten note scrawled directly onto the memo—followed by a transcript of that note via email.

Court has already seen as an exhibit one of those “returns”—Harper’s ruling on the issue of what constitutes residency, passed on to Wright and others in PMO by Novak.

Perrin said he was “immediately taken aback” by the decision, which said owning $4,000 of real property was all one needed to be deemed a resident of a province or territory.

Perrin thought this “untenable,” and envisioned a case in which someone claims residency in Nunavut, where he has never been, just on the basis of having purchased $4,000 in land.

Otherwise, Perrin’s part in l’affaire Duffy was largely as the guy who handled Duffy’s lawyer at the time, employment specialist Janice Payne.

It was to Perrin that Payne emailed what he today called her list of “demands” on behalf of Duffy, which included a condition that the PMO get Deloitte off Duffy’s back and “keep him whole on the repayment.”

In exchange, Duffy would stop claiming his housing allowance, say that he may have made a mistake, and stop defending his entitlements.

It soon became clear that Perrin saw his testimony as an opportunity to salvage his reputation, which he may see as sullied by his ties to the Duffy-tainted PMO.

It was Perrin, after all, who wrote of Payne’s insistence that she get a final version of the Duffy-PMO “understanding” in writing: “I explained that was not happening. We aren’t selling a car or settling a lawsuit here. She seemed to get it eventually.”

Otherwise, Perrin was at pains to tell the court he always assumed the condition that Duffy be kept “whole,” and receive a payment, meant only that he’d get reimbursed for dates upon which he was travelling on parliamentary business.

He said he once told Wright that Deloitte would never give up its mandate to probe Duffy—that a cardinal rule of auditing firms is that once they get an assignment, they do not stop until it’s done, which he confessed he felt uncomfortable telling a man with such extensive corporate experience.

If there were attempts to meddle in the Deloitte audit, in other words, Perrin played no role.

During his testimony, Perrin seemed surprisingly eager to get to the March 22, 2013, conference call that Bayne, using Perrin’s police statement, described in such detail this week. But Neubauer, who was methodically going through his notes, presenting email after email in his description of the events leading up to it, kept deferring the episode.

Finally, we were there, and Perrin again laid the thing out in Technicolor.

First, he described Wright’s proposal that they alert Payne, who had asked who’d be in on the call, to just three participants at the PMO—Wright, Novak and Perrin—though he also wanted to invite “silent partners” to listen in without Payne’s knowledge (Chris Woodcock, director of issues management, and parliamentary affairs manager Patrick Rogers).

“I took the position that because she had given a direct question of who’s going to be on the call it would not be ethical to have people quietly listening in as well, and that you should only have people on the call or listening to the call who we disclose,” Perrin said.

Therefore only Perrin, Novak and Wright would participate.

“Three or four minutes before that call was supposed to start—would you like me to continue?” he asked, and Neubauer invited him to do so.

Perrin started in again, describing how he arrived in Wright’s office, where the call took place. “He [Wright] was seated at his desk. I took a seat at his boardroom table. I remember this fairly vividly because there were relatively few occasions where I met with him directly in his office … I started to give him a very short briefing on how I thought the call was likely to go.”

The impediment to a deal was that Payne and Duffy believed they had a case to make with Deloitte, that the rules on the matter of the housing allowance were ambiguous. The news Wright was fixing to share with Payne wasn’t good: the PMO had failed in its attempt to call the audit firm off, so Deloitte’s probe was going ahead, and would make a negative finding in relation to Duffy of non-co-operation.

Perrin was still describing Payne’s position when Novak walked in.

“I was directly across from Mr. Novak … At this point I had concluded my briefing on the content of my call with Ms. Payne and indicated to Mr. Wright that they’re likely to be quite incensed based on the fact that the audit is not only going ahead but that it will make this negative finding of non-co-operation. And at this point Mr. Wright interjected and said that ‘Sen. Duffy will be going ahead with repaying his expenses because I will be paying for them.’ And that was the first time that I ever heard that, so I was quite surprised by that statement from him. He had never discussed it with me or consulted with me in any way, there had never been any contemplation that I’d ever heard of or speculated on. And so because it was so surprising to me I looked to my right to see Mr. Novak’s reaction, and he didn’t have any reaction to that information. And then the call proceeded literally within a minute of that.”

Wright presented his case to Payne, and Payne presented Duffy’s to Wright, just as Perrin had described it to him before the call.

“Then Mr. Wright said to her, ‘Well, Sen. Duffy is going to go ahead and repay that money because it’s coming out of my pocket,’ ” Perrin told court. “He stated it very matter-of-factly. And what surprised me was without skipping a beat then Mr. Wright and Ms. Payne proceeded to then discuss how this funding would be provided from Mr. Wright to Sen. Duffy.”

Perrin appears again tomorrow, when Neubauer will continue his examination of the witness.

Things are likely to get very interesting when Bayne begins his cross. The new details in Perrin’s testimony has managed to broaden the defence’s palette, and Perrin is also exposed: among the PMO emails entered as evidence here are those that indicate he knew, or should have known, that the PMO had enlisted Gerstein in its efforts to get Deloitte on side.

Perrin is smart, but cherubic. Will he be a match for Bayne, who is also smart, and the opposite of a cherub?