The death of a Canadian whale rescuer led Canada and the U.S. to ban operations on right whales—'a real insult' to their work, says one rescuer 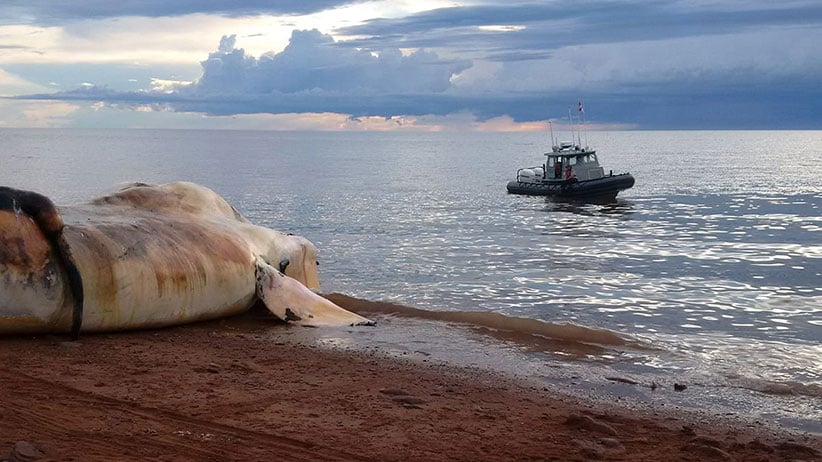 The carcass of a right whale is prepared to be towed out to sea near Norway, Prince Edward Island, June 28, 2017. (Fisheries and Oceans Canada/Reuters)

The last thing Joe Howlett ever did, standing on a Department of Fisheries and Oceans Canada fast-boat bobbing in waters 20 kms off Shippagan, N.B., was give a smiling thumbs up to the five DFO officers with him just as he saved a whale’s life.

It was July 10. Howlett, a jovial 59-year-old had just used a long pole with a curved-back blade on the end to cut off the last line of tangled fishing gear likely to drag a massive and tiring North Atlantic right whale to its death.

Only an estimated 525 right whales (Eubalaena glacialis) are known to exist and the species, which can grow up to 18 metres in length and weigh 70,000 kilograms, is listed as endangered under the Species at Risk Act. To date, in what’s been called an extreme mortality event off North America’s Atlantic coast, the corpses of 13 right whales have been found this year; they’ve been killed by entanglements, ship strikes and other undetermined causes. Every additional dead right whale is a significant blow to the species’ future survival.

In 2002, Howlett co-founded the Campobello Whale Rescue Team with fellow fisherman and whale watching tour operator Mackie Greene. Together, with a core group of mainly fishermen from Campobello Island, N.B., the CWRT has freed dozens of entangled whales over the ensuing years with nary a scratch.

But on this occasion, Howlett wasn’t working with his usual Campobello crew. Captaining the private whale research vessel the Shelagh, he got a call from a DFO ship. Not far away, in the Gulf of St. Lawrence, it had spotted the struggling right whale. The DFO requested Howlett’s help to free it. A second or two after cutting it free, the whale arced its tail up sharply over its back to dive, striking and killing Howlett. (Read more about Joe Howlett here.)

Howlett’s death had an immediate and—ironically for his shocked fellow rescuers—negative impact on disentanglement operations worldwide. The next day Transport Canada and DFO both began an investigation into Howlett’s death. As well, DFO suspended outright all right whale disentanglement operations in Canadian waters and put restrictive conditions on the rescue of other whale species such as minke, humpback, fin and sei whales. In the U.S., the National Oceanic and Atmospheric Association (NOAA) immediately followed suit, as did authorities in New Zealand, Australia and several other countries.

Why a complete ban on rescuing right whales, the most endangered of all whales? While some species, such as the humpback, seem to recognize humans are there to help free them from nets and calm down, right whales tend to thrash and try to dive or swim away from rescuers. 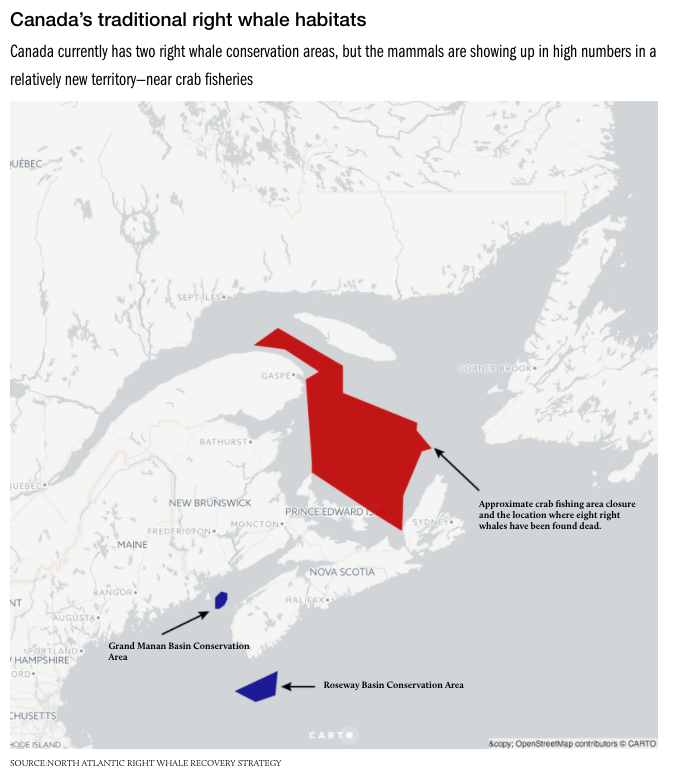 The new DFO protocols require the few non-DFO disentanglement organizations in Canada, which previous to Howlett’s death could operate autonomously to save whales, to now photograph, identify video tape, and monitor an animal to determine how badly it’s entangled. They must then provide that information to DFO and wait for DFO to consult with both Canadian and U.S. experts and rescue organizations, such as the Centre for Coastal Studies in Massachusetts  and the DFO’s own marine mammals coordinator on the B.C. coast. Only then does DFO decide whether a rescue can go ahead. “It goes without saying the death of Mr. Howlett was a serious accident,” says Adam Burns, director general of Fisheries Resource Management in Ottawa.

“So the government of Canada, and I might add other governments, including the U.S., have taken similar measures. This is all about helping to mitigate and manage that risk to human safety during the course of any sort of marine mammal response activity.”

Aside from in-kind support that includes boats, fuel and equipment, the DFO annually gives a total of about $300,000 to the whale disentanglement and stranding programs that operate in Quebec, Nova Scotia, New Brunswick and Newfoundland. (Off the B.C. coast, DFO handles whale rescues itself.)

After requiring members of its Large Whale Disentanglement Network to take an online training program emphasizing safety protocols after Howlett’s death, on Aug. 24 NOAA lifted its U.S. disentanglement restrictions on all but the right whale. But Canada’s new rules, says Burns—including a complete ban on disentangling right whales—will stay in place until Transport Canada completes its investigation and makes any recommendations on safer disentanglements techniques. Transport Canada told Maclean’s in an email it could not comment on a possible timeframe for completing that investigation.

Those hardy few in the cold, wet work of setting whales free from the ubiquitous fishing and crabbing gear submerged in the inshore waters along Canadian coasts don’t quibble with the investigations into Howlett’s death. “Definitely I think there is a need for an investigation,” says Jerry Conway, a close friend of Howlett’s and an advisor with the Canadian Whale Institute based out of Campobello Island, a Bay of Fundy fishing community of just over 1,000 people.

“We need to learn if something was done that we wouldn’t have done or shouldn’t have done, that lead to this tragic accident. Joe was with an untrained or partially trained crew. We don’t know what the qualifications of the (DFO) officers were that were running the boat.”

But, say Howlett’s family and colleagues of Howlett’s, the new DFO rules seem an overreach that potentially puts whales, not to mention humans, in more danger than before. Howlett’s son Tyler says his father would certainly want rescuers to be as safe as possible, “but he probably would be upset” about the risks the rules pose for whales.

Wayne Ledwell, along with his partner Julie Huntington, have run, practically by themselves, the Whale Release and Strandings Group for Newfoundland and Labrador since 2001. Based in Portugal Cove-St. Philip’s, Nfld., the couple works nearly every day during fishing season saving whales—not to mention fishing gear. Crabbing and fishing gear destroyed or dragged off by whales can severely hurt a fishing crew’s income.

Operating in some of the world’s harshest weather, it’s difficult, often risky work, says Ledwell, who uses what he calls “our little Newfoundland pony.” That’s a 15-horsepower, 4.7-m Zodiac provided by the DFO that won’t harm a whale if it bumps it. Fisheries and Oceans also gives funding of about $71,000 annually to Ledwell and Huntington towards wages and to cover a vehicle, fuel, travel, phone and other costs. (The Campobello team gets $9,500 annually, $6,000 of which covers the Zodiacs they have on loan from the DFO).

“You know, it’s so hard getting whales out of that gear,” says Ledwell. “Jon Lien [the founder of the Newfoundland program] used to say they know the Newfoundland whales when they hit the Caribbean [after migrating there in winter] because they know how to curse. Because there are so many curse words that have been sworn at them trying to get them out of fishing gear.”

In an email to Maclean’s, Ledwell outlined how DFO authorization delays of three hours or more could mean entangled whales won’t be reached before weather closes in or whales disappear or die.

On Aug. 7, Ledwell’s group got a call about a whale towing gear at 1:45 p.m. “It took until (3.12 p.m.) for us to get a go ahead response [from DFO]. The weather was good and by that time the whale had left the area.” On another occasion in August they had word of a whale towing multiple nets near Conception Bay. “The only protocol we observed,” Ledwell wrote, “were the 40 years of experience of the most highly respected program for disentangling whales in the disentanglement world.”

“Here is where it gets real serious, life threatening serious,” he continued. “That whale was towing 300 meters of gillnet with 2 red poly buoys streaming behind. There were recreational boats everywhere zooming in and around the whale to either go fishing, pleasure boating or whale watching. We were terrified one of them would hook the net when it came afloat because they didn’t put the poly buoys, if they could see them, and the whale together.” Any delayed whale rescue, contends Ledwell, could, aside from harm the animals, injure fishermen and boaters snagged by gear towed behind whales.

Emphasizing that human safety “is paramount,” the DFO’s Burns says his department is doing what it can to streamline the new protocols in consultation with experts and third-party groups like the Campobello team.

But Ledwell, whose tiny organization has so far in September released four whales and would have done another if not for the new protocols, calls the DFO’s response to Howlett’s death “a real insult to all the work done down here.” It is, he says, “a new layer of bureaucracy in Ottawa and B.C. who haven’t one sweet clue what we do.”