The Prime Minister spoke about the accident and the six people on board: 'All of them are heroes. Each of them will leave a void that cannot be filled.' 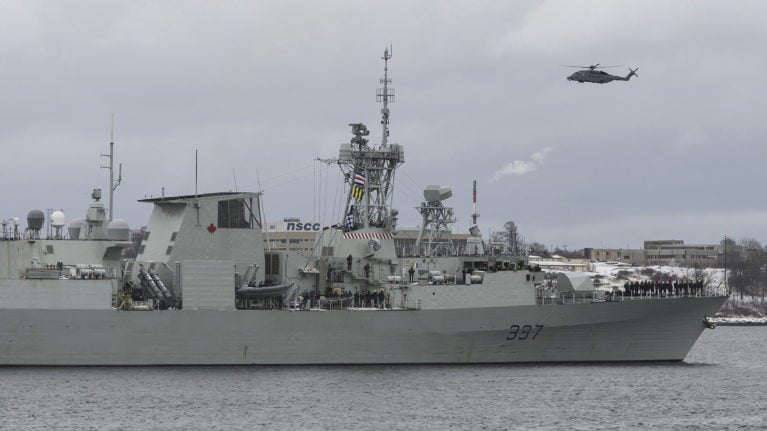 A Cyclone helicopter flies over HMCS Fredericton as its crew leaves the Halifax harbour for a six-month deployment as part of NATO's Operation Reassurance, on Jan. 20, 2020 (CP/Darren Calabrese)

A Canadian military helicopter crashed in the Mediterranean Sea during a training exercise with six people on board. One is confirmed dead and five are missing.

Gen. Jonathan Vance, the chief of the defence staff, said the soldier who was killed was Sub-Lieutenant Abbigail Cowbrough, a crew member of the HMCS Fredericton.

An engineer. A piper.
She piped her love and support for Nova Scotia just last week.

The Cyclone helicopter took off from the Fredericton on a NATO exercise and crashed as it was returning to the ship on Wednesday evening, said Vance at a press conference in Ottawa. Minutes after the ship lost contact with the helicopter, flares were spotted and search and rescue efforts launched, he said.

Prime Minister Justin Trudeau spoke about the crash on Thursday morning. Here are the PM’s remarks in English:

Yesterday, a Royal Canadian  Navy helicopter on a NATO mission carrying six members of the Canadian Armed Forces went down with all hands in the Ionian Sea off the coast of Greece. They were flying from the Canadian naval frigate HMCS Fredericton, home port of Halifax, as part of Operation Reassurance. One casualty was recovered and five are missing.

All of them are heroes. Each of them will leave a void that cannot be filled.

On behalf of all Canadians, I want to offer my deepest support to their families, their friends, their shipmates and their fellow CAF members.

This is another very hard day for Halifax, for Nova Scotia and for our armed forces families.

I spoke to NATO Secretary General [Jens] Stoltenberg earlier this morning, who offers support and assistance in the times to come. In the coming days, there will be many questions about how this tragedy occurred. And I can assure you we will get answers in due course.

In a season of grief, a time of hardship, heartbreak and loss for so many Canadians, the men and women of the Canadian Armed Forces stand tall. Bearing the maple leaf on their shoulders,  they are known around the world as beacons of civility, compassion and courage.

Whether combating terrorism, standing by our partners and allies or supporting peace operations around the world, they do what they always do: step towards danger so the rest of us can stay safe.

Operation Reassurance is Canada at its best, bolstering security and stability in Central and Eastern Europe.

Here at home, we turn to the forces in times of flood, fire or other natural disasters. They never say no. They always put their shoulders to the wheel. And now, as we battle the COVID-19 pandemic, the Canadian Armed Forces are on the frontlines in our seniors homes, helping to protect and care for our most vulnerable citizens.

Even as up to 915 soldiers are deployed on Operation Reassurance in Europe, reinforcing NATO’s collective defense, the CAF will soon have more than 500 serving in 13 long term care facilities in and around Montreal. And more will go in as they are prepared for this work.

Earlier this week, CAF teams were deployed to assist in five long term care facilities in Ontario. These people are working day and night, helping to protect our parents, our uncles, our aunts and our grandparents.

Whether at home or abroad the women and men of the Canadian armed forces are the hand of our intentions, the concrete expression of our valour and values as Canadians.

And so we stand with them and we hold out hope to find the missing.