The cultural meaning of the Vimy memorial 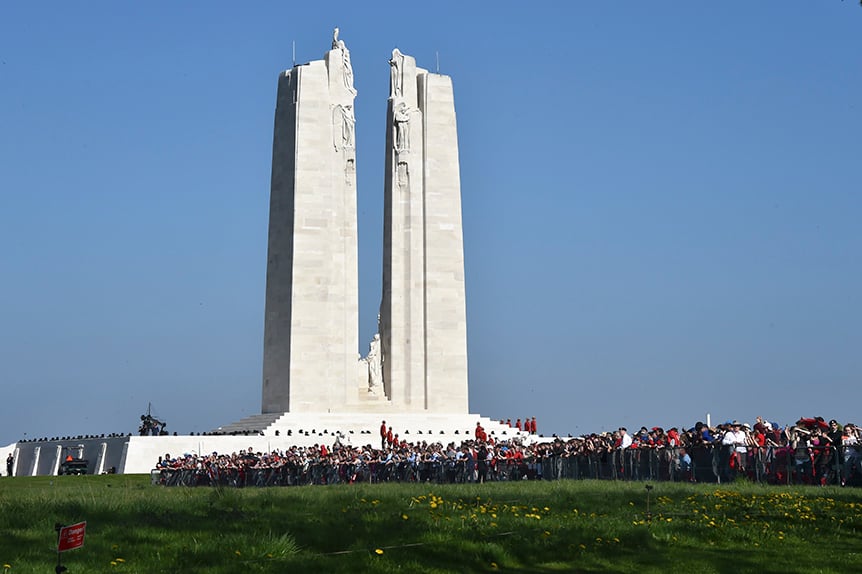 A picture shows the Canadian National Vimy Memorial in Vimy, near Arras, northern France, on April 9, 2017, during a commemoration ceremony to mark the 100th anniversary of the Battle of Vimy Ridge, a World War I battle which was a costly victory for Canada, but one that helped shape the former British colony’s national identity. (Philippe Huguen/AFP/Getty Images)

Dr. Glyn Prysor is the chief historian at the Commonwealth War Graves Commission, an organization that was created in 1917 at the end of the First World War because, in his words “it was thought that the graves of those who lost their lives shouldn’t be allowed to disintegrate.”

I met him during Sunday’s commemoration ceremony for the battle of Vimy Ridge. In a media tent packed out with Canadian press, radio and TV journalists, Prysor was an English anomaly in a perfectly tailored navy wool suit. He’s in his mid-30s—quite young for his very sobering job title—and offered excellent historical context and commentary during the three-hour-long ceremony.

Prysor received his PhD from Oxford and now finds himself in charge of maintaining the graves and memorials for the 1.7 million who died in the first and second world wars. “We have graves in 157 different countries,” he said. “We make sure they are maintained and are involved in the planning of ceremonies like this one.”

Memorials, he pointed out, are a key factor in how a culture forms its own history. “It’s a physical reminder of what happened. And it’s also a very important part of how we remember things.”

The arresting and eerily beautiful monument at Vimy Ridge is a case in point. Would this battle have come to take such an honoured place in the Canadian national consciousness if the soaring memorial, built over 11 years by designer Walter Seymour Allward, had never been built? It seems unlikely.

Opened by King Edward VIII (in his brief role as monarch) in July 1936, Vimy then fell into German hands during the Nazi occupation of Germany during the Second World War. When the allied forces prevailed, General Montgomery used newsreel footage of the reclamation of Vimy as a symbol of victory.

In the latter part of the 20th Century, however, the Canadian memorial fell into a state of disrepair.

“It was semi-forgotten and then in the 1990s it became popular again and since then there’s been a lot of money put into it,” says Prysor. The reason for the resurgence of interest in Vimy, he says, was a series of linked events. The first was the 1986 publication of Pierre Berton’s book Vimy which became a historical bestseller in its time and captured the world’s imagination. Another was the resurgence of interest in what Prysor calls “family history,” by which he means aging baby boomers with travel budgets flying overseas in order to research their family trees or to pay respects to a relative who fought in one of the two world wars.

And with public interest, followed public funds. Successive Prime Ministers Jean Chretien, Martin, Stephen Harper and Justin Trudeau all were committed to keeping the monument pristine for what is now a steady stream of Canadian tourists and school trips.

Though the battle at Vimy has, over the century since its occurrence, come to symbolize Canadian unity and ingenuity—the much-vaunted birth of a nation—in fact it is just a battle among many battles in which the Canadian troops fought with astonishing and nation-making bravery, and usually along side their allies. “Canadians were not the only ones who fought at Vimy, far from it,” Prysor points out. “And they also played a huge part of Ypres, Somme, Passchendaele and the advance of the Western Front in 1918.”

Prysor calls it “a watershed moment, but certainly not the whole story.”

While the cultural dominance of Vimy does irk some in the historical community, for Prysor, it serves as reminder of the importance of his job. If cultural myths are made through monuments then it’s no wonder Vimy is ours.