The social media giant was finally called to answer to legislators for its conduct. Mark Zuckerberg couldn't be bothered to show up. 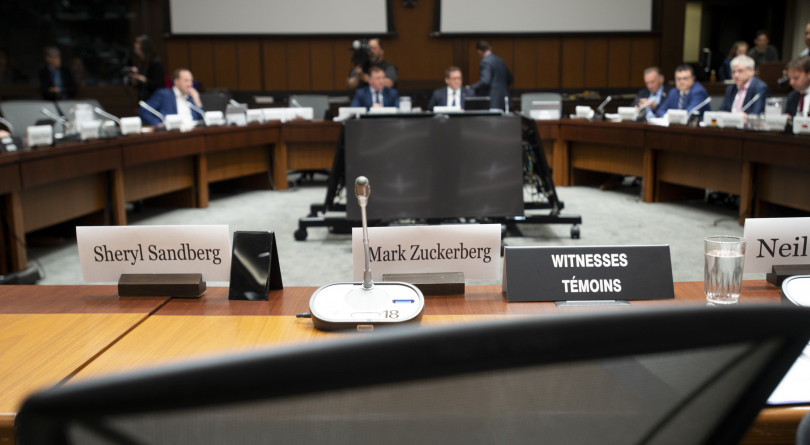 An empty chair sits behind the name tags for Facebook's Zuckerberg and Sandberg as the International Grand Committee begins in Ottawa on May 28, 2019 (Adrian Wyld/CP)

The adage “If you’re not paying for it, you’re not the customer; you’re the product” existed, in some form, long before the internet took over our brains. But in the last several months, with remarkable swiftness, it seems many of those walking-and-talking human products—and the legislators who represent them—have suddenly realized the full truth of this and reacted with fury.

It was only in January that Karina Gould, minister of democratic institutions, introduced a plan to combat foreign and online interference in the upcoming election. The government announcement described the plan in part—with touching confidence or weapons-grade naïveté, depending on how you viewed it—as simply, “Expecting social media platforms to act.”

There were no  mechanisms outlined to make that happen: it just would, somehow.

By early April, when the Canadian Security Establishment released a report on foreign interference, Gould was “not feeling great” about the eagerness of social media companies to live up to those virtuous expectations. “We have not really seen that much progress with them,” she said. “I don’t have the confidence that they’re disclosing everything with us.”

Just a few weeks later, Privacy Commissioner Daniel Therrien announced that Facebook had broken the law gobbling up the private information of hundreds of thousands of Canadians as part of the Cambridge Analytica scandal, and he would seek a court order to force the recalcitrant company to change its “essentially empty” privacy protections. By then, the hopes for voluntary improvement had evaporated. “We understand that the time of self-regulation is coming to an end,” Gould said.

Which brings us to the end of May, when an international committee—called, rather grandly, the International Grand Committee on Big Data, Privacy and Democracy—comprised of Canadian MPs and legislators from a dozen other countries, including the U.K., Ireland, Singapore, Mexico, Germany, Chile and Morocco, gathered in Ottawa to grill executives from tech and social media giants on every aspect of their business models and civic conduct.

Sometimes a symbolic gesture can be hammily obvious but also highly effective, and so it was with the two empty chairs parked at the witness table behind nameplates emblazoned “Mark Zuckerberg” and “Sheryl Sandberg.”

The committee wished to properly commemorate Facebook’s CEO and COO, you see, who had been summoned to this international gathering but elected to no-show, and the news photographers present of course swarmed the irresistible little tableau, shutters chattering.

The meeting kicked off with a vote in favour of NDP MP Charlie Angus’s motion to issue an open summons to the two erstwhile execs, should they materialize at a Canadian airport “to come here for a tech conference or to go fishing,” Angus suggested.

This was the second gathering of the International Grand Committee (IGC), the first having been held in London last November and the third planned for Ireland this fall. And this group of legislators, in the parlance of the internet they had come together to try to make sense of, Did Not Come To Play.

Conservative MP Bob Zimmer—co-chair of the IGC, and chair of the standing committee on access to information, privacy and ethics that hosted it—clarified the standing summons idea in an interview after the hearings. “There’s not going to be a bailiff at every airport in Canada, but if we get word that they’re going to be in Canada, we will have a bailiff go meet them at the airport and serve them,” he said. “If we have to pull off an emergency meeting to meet them…we will absolutely do that.”

If the Facebook executives were to then ignore that summons, the next step would be a vote on whether to hold them in contempt of Parliament. “It’s a very unusual procedure. Are we going to put them in handcuffs? No,” Zimmer said. “But to be held in contempt of our entire country of 36 million people, I wouldn’t say that would serve any platform well.”

Over the two days of the meeting, few of the tech companies represented—including Facebook, Amazon, Google, Twitter, Apple, Microsoft and Mozilla—or their emissaries escaped tough and sometimes embarrassing questioning, but it was plain that Facebook was the committee’s bête noire, seen as both greedier in the personal information it hoovered up from its users and more resistant to changing its practices. That obstinance seemed particularly galling to the legislators, given the purring deference with which the two Facebook representatives who did show up responded to every query and criticism.

At one point, Liberal MP Nathaniel Erskine-Smith adopted an extravagantly fake tone of wonderment to inquire why Zuckerberg had been unable to join them. “Mr. Zuckerberg and Ms. Sandberg have entrusted us to represent the company here today,” replied Neil Potts, a global policy director. “We are subject-matter experts on these areas, and we’re more than happy for the opportunity to be here.”

He did not look happy; he looked very tired.

Erskine-Smith read out a quote from an op-ed Zuckerberg published in The Washington Post on March 30, in which he outlined the most pressing problems with the internet and advocated for governments and regulators to take more control, saying, “I believe Facebook has a responsibility to help address these issues, and I’m looking forward to discussing them with lawmakers around the world.” Erskine-Smith looked at the two Facebook gentlemen before him, then gestured roundly at the legislators sitting alongside him. “He just didn’t mean these lawmakers,” he said. “He meant other lawmakers, I’m sure.”

Damian Collins, the British MP who co-chairs the IGC, had a protracted and testy exchange with Potts about a viral video that had been manipulated to make it look as though Nancy Pelosi, speaker of the U.S. House of Representatives, was impaired. YouTube had yanked the video, and Collins asked Potts repeatedly why Facebook would not do the same. Potts tried, valiantly: they had “aggressively down-ranked” the video, he said, they had labelled it a manipulation so users could inform themselves, and Collins’s very astute questions highlighted the complexity of these issues, he said.

“No, I’m sorry, with due respect, it just shows the simplicity of these issues,” Collins interjected. “The simplicity that another company has followed—recognizing the same issues—the simple action to say, ‘This is clearly fake, it’s clearly distorted, it’s there to undermine senior public figures and actually shouldn’t have a place on the platform.’”

Potts tried again. “Your opinion is right, and I obviously respect YouTube’s opinion as an independent company. But we’re not hearing people talk about this video as if it is real, we’re hearing people discuss the fact that it is fake and it is on the platform,” he said. “So the question of have we informed people that this is a fake video, yes we have…and then they can make their further decisions from there.”

Up at the head of the table, Zimmer’s face turned into Grumpy Cat (may she RIP).

“If you’re going to allow your platform to be abused in this way by people producing disinformation films targeted at users to try and interfere with democracy, and the best you’re going to do is just put a flag on it to say ‘Some people dispute this film,’ I think that’s a very dangerous precedent,” Collins retorted.

Conservative MP Peter Kent later picked up this same line of questioning with Kevin Chan, an Ottawa-based global policy director for Facebook. Chan wondered if perhaps they could leave aside the specifics of that video for a moment so he could discuss the ways in which Facebook has been improving itself, but Kent cut him off: the video is a lie, would you take it down? “I understand what you’re getting at. I do think if you’ll permit me, the way I would like to maybe talk about it a bit…” Chan said, his voice rising to a plaintive squeak. “Yes or no would work,” Kent barked.

Chan paused, glanced down at the table and rearranged his papers. “That’s why we’re here. We would welcome basic safe…” Kent waved a hand in the air: “So this is a learning experience for you?” This time, Chan had to wait out the guffaws that erupted around the room. “Mr. Kent,” he said, in the extremely careful tone of voice with which you would address an irate customer when there is a line of other customers behind them. “We would welcome basic standards that lawmakers can impose on the platform about what should go up and what should come down.”

Chan went back to this point repeatedly in his testimony and in media scrums afterward, and it echoes the thesis running through Zuckerberg’s op-ed: what the internet has become is too much for private companies to regulate, and governments need to step in. In many ways, this seems eminently sensible, but it’s a confusingly deferential message from a company that has otherwise shown little willingness to cooperate and make substantive changes after being scolded by various governments.

But what Zuckerberg really seemed to be advocating for in his column was a “globally harmonized framework” to protect people’s data and privacy, and international agreement on standards that Facebook and other tech companies could then use as their guiding principles. “I also believe a common global framework—rather than regulation that varies significantly by country and state—will ensure that the Internet does not get fractured, entrepreneurs can build products that serve everyone, and everyone gets the same protections,” he wrote.

So it would seem that every country concerned about the internet’s effect on its citizens simply has to hammer out laws and regulations they can all agree to, governing some of the most sensitive and difficult issues involving free expression, democratic participation and hate speech, and then Facebook will be more than pleased to abide by those universal rules.

Since that will happen approximately on the 10th of Never, it all ends up back in the same place it started: in a hulking, windowless committee room in downtown Ottawa, with a ragtag cast of international politicians trying to get answers out of and score rhetorical points on mid-level corporate representatives of the giants of the internet.

The exhaustive rounds of questioning in the committee meeting gave each international delegation multiple chances to grill the tech emissaries before them; the Brits were excellent sardonic theatre, and Canadian politicians like Erskine-Smith and Kent clearly enjoyed flexing some prosecutorial muscle, with a dash of exasperated-high-school-vice-principal thrown in.

But it was the delegation from Singapore—Edwin Tong and Sun Xueling, both MPs—who very quietly and precisely executed some of the most barbed questioning over the two days of the committee.

Tong grilled Facebook at length about videos on the platform from Zahran Hashim, a radical cleric linked to the recent bombings in Sri Lanka that killed hundreds of mostly Christian worshippers on Easter Sunday. Tong contended that, despite violent rhetoric in the videos and multiple people flagging them to complain, Facebook had failed to yank the videos until after the bombings.

Potts repeated again and again that if Facebook had known about this content, certainly it would have removed it, but if they weren’t made aware of it, that would explain why it lingered. He pledged to look into this and follow up, but Tong was in no way mollified.

Here he arrived at the point he had been driving at all along.

Potts rejected this “full-heartedly.” But Tong—one of the softest voices in the room over those two days—had made himself heard.