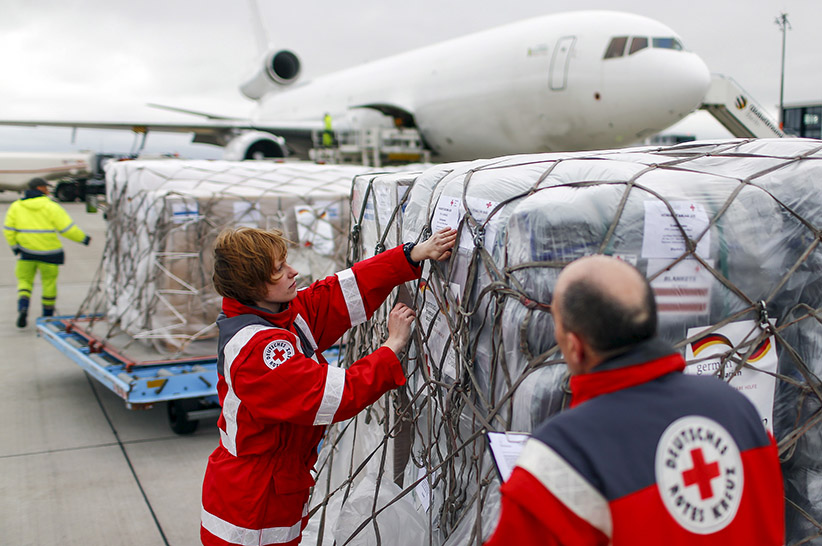 Last year marked an unpleasant high-water mark for the modern world: the greatest number of people uprooted from their homes as international refugees or internally displaced persons since the Second World War. Nearly 60 million individuals are without a home. Yet in the midst of multiple crises—both natural and man-made—across Africa, the Middle East and Asia, there’s at least one hopeful sign. Record levels of catastrophe have been met with record levels of humanitarian aid. While there’s always more to do, the world’s most pressing problems are getting the attention they deserve.

According to a report last week from the British non-profit group Development Initiatives, 2014 saw a dramatic increase in global disasters: the Ebola outbreak in West Africa, war and mass migrations in Syria and Iraq, civil unrest in sub-Saharan Africa as well as the after-effects of the devastating typhoon Haiyan in the Philippines. “Compared with 2013, 10.7 million more people worldwide were affected by disasters caused by natural hazards, while conflict and persecution pushed the numbers of displaced people to the highest level ever on record,” it says.

In the face of all this gloom, a bright spot: global humanitarian assistance also hit an all-time high. In 2014, public and private donors provided $24.5 billion (all figures US$) in humanitarian aid, up nearly 20 per cent from the year previous. Individual and corporate donations comprise a quarter of this total. Humanitarian aid in response to disaster relief campaigns for earthquakes, hurricanes or other immediate cries for help is considered separate from programs aimed at building up or solving long-term problems in developing countries, what’s called official development assistance.

While there is no joy in recognizing the globe faces so many problems, it seems a welcome sign that the world’s most fortunate countries, corporations and individuals have responded with unprecedented generosity. The greatest contributions continue to come from the wealthiest Western nations; the top three being the United States ($6 billion), the United Kingdom ($2.3 billion) and Germany ($1.2 billion). What makes the 2014 increase particularly notable is that countries outside Europe and North America shouldered a large share of the burden. Saudi Arabia, for example, responded to numerous issues in its own backyard with a massive hike in humanitarian aid last year, nearly tripling its contributions, to $755 million. The United Arab Emirates gave $375 million. This new-found generosity among Middle Eastern oil states seems entirely appropriate given the many calamities affecting that region. Humanitarian aid should properly be the responsibility of every country that can afford it, not just the West. Notable by its absence, however, is China. For a country that’s had such a massive impact on the world’s economy, it seems reasonable to expect a bigger effort in helping solve the world’s humanitarian problems as well.

Closer to home, these figures cast a new light on Canada’s efforts on the global stage. Stephen Harper’s government has taken plenty of criticism for its laggardly approach to official development assistance. When U2 front man and philanthropist Bono took time away from his North American tour last week to meet with the leaders of all three major parties in Ottawa, the main media talking point was Canada’s failure to hit the United Nations’ foreign aid target of 0.7 per cent of gross national income; our contribution stands at a measly 0.24 per cent, and this year’s budget continues a five-year freeze on foreign aid.

Yet the $747 million provided by Canadian governments, companies and individuals last year specifically for humanitarian aid ranks us seventh overall, just behind Saudi Arabia. We allocate a greater share of our foreign aid to acute crises such as disasters and wars than to long-term (and often inefﬁcient) program funding than most other countries. We stand third in humanitarian funding when measured as a percentage of official development aid. That famous Canadian generosity and compassion, so much on display during the 2013 Alberta floods, readily extends to the rest of the world. Whenever and wherever there’s a call for help, we’re among the first to give.

Of course, need will always outstrip resources when it comes to solving the world’s problems. Even as it reports a record $24.5 billion for 2014, the Development Initiatives study notes an overall funding shortfall of nearly $8 billion due to unmet requests. Still, it is important to recognize progress within catastrophe. That the developed world reached a new high in humanitarian aid is a good thing. So too is the new-found willingness of wealthy, non-Western nations such as Saudi Arabia and the U.A.E. to take on a bigger role in solving problems. Finally, when it comes to responding to the immediate needs of the world’s most vulnerable people, Canadians can rest assured they’re doing their part. As we always have.