The Edward Cornwallis statue is stuck in (top secret) limbo

Authorities in Halifax are keeping the monument's location under wraps—purportedly for its own protection. For some, it might as well stay wherever it is. 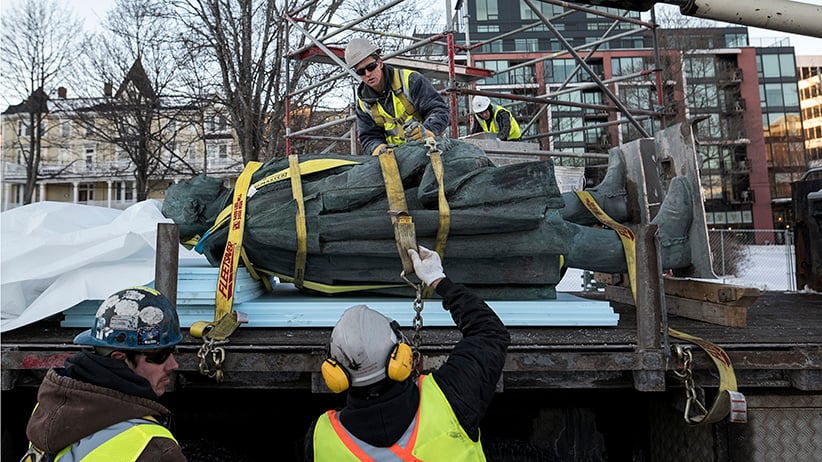 Workers secure the statue of Edward Cornwallis to a flatbed truck after the cast was removed from its pedestal in Halifax on Jan. 31 (Photograph by Darren Calabrese)

When a crane wrenched the bronze statue of Edward Cornwallis from its granite pedestal in Halifax on Jan. 31, the words I lost my talk/ the talk you took away rang through Mariah Joe’s mind as she shivered under a cold sun.

The passage was written by her late grandmother, prolific Mi’kmaq poet Rita Joe, in her famous poem I Lost My Talk, which describes the loss of language and identity, the experience of being silenced and ultimately heard after living through the residential school system.

“It feels like we’re finally being listened to,” said Joe, a 24-year-old Saint Mary’s University student from Membertou First Nation in Cape Breton, N.S. “There have been so few instances in Canadian history where they listened to us and did what would be the most healing for both communities, so I think this is amazing. It’s monumental.”

Cornwallis was a British military officer who founded Halifax in 1749 and soon after infamously proclaimed bounties for the scalps of Mi’kmaq men, women and children in response to attacks on colonists. People have long called for the removal of tributes to him, with some historians calling his acts a form of genocide.

The statue had stood for nearly 90 years in the south end Halifax square also named after Cornwallis. It was erected by the Canadian National Railway as a tourist attraction to celebrate the former governor of Nova Scotia. Its removal came just one day after Halifax Regional Council voted 12-4 to remove it following several clashes over the issue during the past year.

RELATED: Education is not enough to counter monuments to history’s scoundrels

On Canada Day, five men in matching polos and khakis from the far-right men’s group, the Proud Boys, had confronted a group of Mi’kmaq protestors demonstrating near the statue. Two weeks later, city crews draped a black tarp over the statue during a demonstration in an attempt to appease protestors while Mayor Mike Savage promised to consider its removal. After talks ultimately broke down between the Assembly of Nova Scotia Mi’kmaq Chiefs and the city, the chiefs made the call on Jan. 26 for its removal.

Three days later, an emergency motion to remove the statue was added to the city council agenda and Mayor Savage took a stand: “The Cornwallis statue has become a powerful symbol,” he said. “I believe its continued presence on a pedestal in the middle of a city park is an impediment to sustained progress in forging a productive, respectful and lasting relationship with the Mi’kmaq in the spirit of truth and reconciliation.” 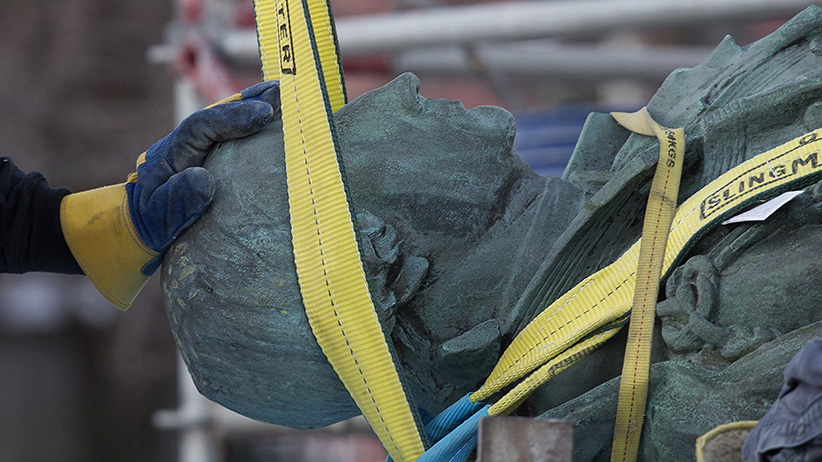 The next day, city crews chiseled and sawed at the base of the pedestal for most of the day to remove the bronze statue. Dirt and dust billowed into the frigid air as passersby snapped pics and vehicles honked. Finally, after more than five hours of prep, crews looped yellow straps around the icicled figure and hoisted it to the sound of cheers and applause from a crowd of about 40 people.

As the statue was shrouded in a green tarp and loaded aboard a flatbed truck, something remarkable happened: a bald eagle that had been flying high in the area for hours, circled low. The onlookers were amazed, pointing and gasping. One man remarked, “He came here for us.”

The statue was then whisked off through rush hour traffic at dusk to a secret, temporary storage unit. City spokesman Brendan Elliott wouldn’t disclose the storage location citing concern that it could be vandalized despite the nine decades it stood more or less unscathed. “This statue has been a lightning rod of discontent for some, and we want to do everything we can to preserve the statue in its current condition while regional council decides on a permanent location,” said Elliott.

Hours later, after darkness befell the square and the media dispersed, author and historian Daniel Paul—who had advocated for the statue’s removal for more than 30 years—came to see the empty pedestal. “I believe Nova Scotia is finally making progress with race relations, particularly with our people, the Mi’kmaq,” he said. “This is what it was all about when I started: it was to change attitudes.”

The next step, he says, is to rename Cornwallis Park. In 2012, a junior high school in Halifax dropped the name in favour of Halifax Central Junior High. Cornwallis Street Baptist Church in the city’s north end is in the midst of establishing a new name.

Meanwhile, Paul says he’d like to see the statue go in a museum with panels that explain not only the atrocities ordered by Cornwallis in Halifax, but also the ethnic cleansing he led in Scotland after the Jacobite rebellion in 1745.

Back in the warmth of her apartment, Mariah Joe now looks down on a statue-less Cornwallis Park filled with the same hope her grandmother expressed at the end of her poem: Let me find my talk/ So I can teach you about me.